The mission of the IDEA (Innovation, Design, Entrepreneurship Accelerator) Bank is to develop Troy University and Troy, Alabama into a regional center for economic growth by creating entrepreneurial resources and collaboration opportunities for our community of students, faculty, staff, alumni, local businesses, and leaders. The IDEA Bank aims to support student-centric entrepreneurship and new ventures in the southeast Alabama region by providing students with the knowledge, resources, and support system to launch their ideas locally

Entrepreneurs must possess unique willpower and a can-do attitude to succeed. Entrepreneurial ventures are risky and there is no one-size-fits-all approach, but an idea will remain an idea if the person behind it does not have the confidence and willingness to jump right in. At the IDEA Bank, we will instill pride in being different, cultivate a spirit of risk-taking, and encourage disruption. We will inspire students to lean into their ideas and believe in themselves.

TROY will offer an Entrepreneurship Minor with the frameworks, courses, and theories to ensure students are grounded in both fundamental and innovative principles needed to move forward. While there is no “one-size-fits-all” approach, the IDEA Bank will empower a curriculum that supplies students with the foundation needed to perfect their craft.

The learning does not stop with the academic curriculum. Special workshops, niche brainstorming sessions, mentorship-matching, guest speakers, community collaboration, and real-life projects will be crucial aspects of the IDEA Bank’s operation to allow young entrepreneurs to explore the opportunities associated with their ideas.

The goal for all student entrepreneurs is to launch their ideas. The IDEA Bank prioritizes hands-on collaboration with faculty, staff, community members, alumni, and more, to provide the support system that students need to apply their inspiration, learning, and exploration to the full development and application of their ideas.

Are you a TROY student with a great idea, but not sure where to start? We are here to help! Click the LAUNCH button below to schedule your introductory meeting with the director of the IDEA Bank and start making your ideas come to life.

Note: Student Launchpad consulting will be unavailable Dec. 6, 2021 through Mar. 7, 2022 due to staffing vacancies.

The IDEA Bank is YOUR resource for collaborative learning and creating. From classes to board meetings to entrepreneur workspaces, this downtown building is your hub for growth. Is the IDEA Bank the right place for your next class, meeting, workshop, or brainstorming session? Utilize the request form below to book your next meeting or event at the IDEA Bank. For additional information or questions, please email ideabank@troy.edu or call 334-770-2624.

REQUEST TO BOOK THE IDEA BANK 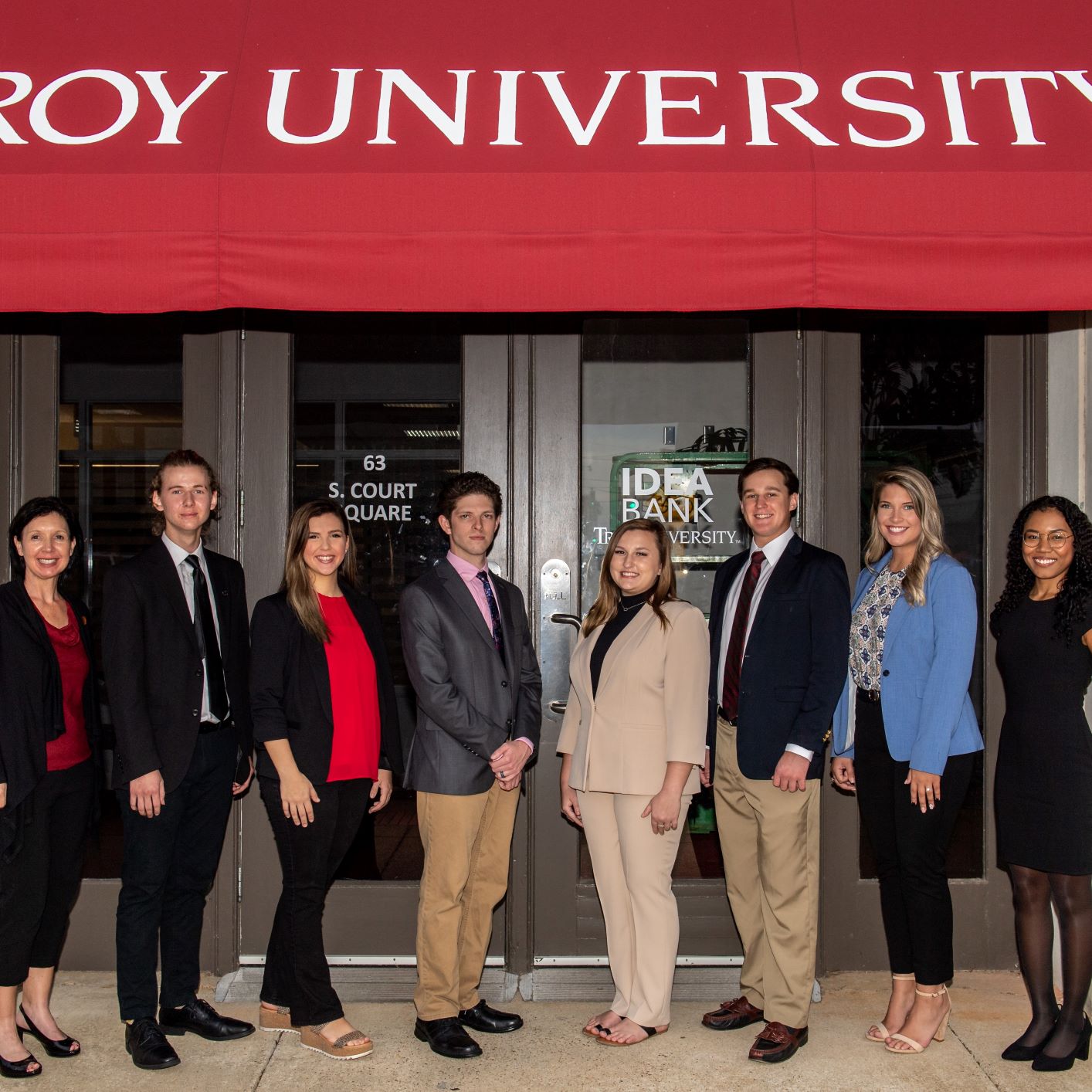 In the meantime, meet the current student-run businesses that are growing and thriving at the IDEA Bank! 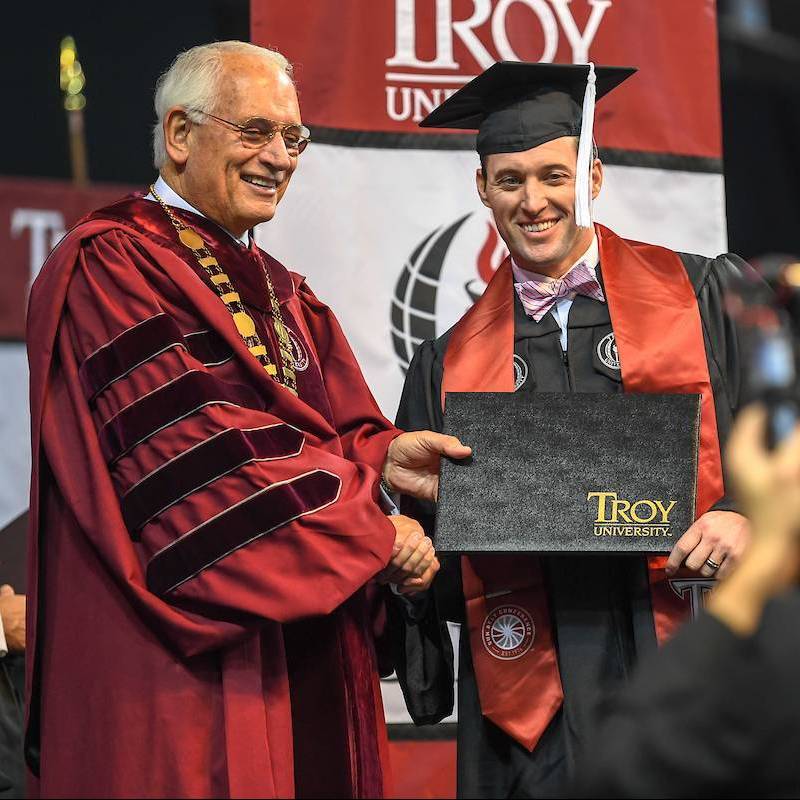 The Troy Bank & Trust Entrepreneurship Program will provide students with a collaborative, creative environment for learning. Students will learn to develop and defend their own opinions, to successfully pitch creative ideas and influence others to invest, engage and/or participate in their own ideas. This program is developed to bring together University resources to assist students with developing, creating, launching and sustaining their own businesses.

The Troy Bank & Trust Minor is available to students across all disciplines.

WHAT'S HAPPENING AT THE IDEA BANK?

Stay in our circle 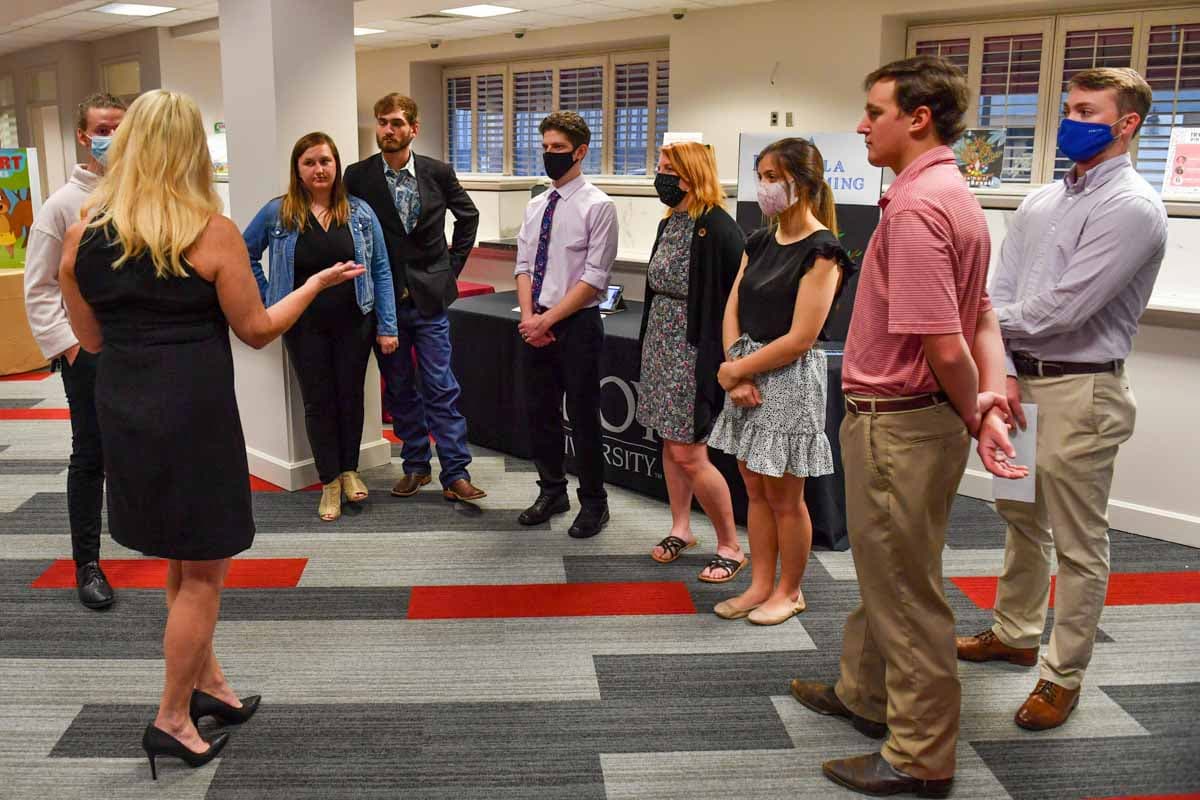 Whether you are a current TROY student, alumni, business leader or member of the community who is simply curious to learn more, we have a place for you at the IDEA Bank. Enter your email below to receive email alerts about IDEA Bank activities, events and updates. 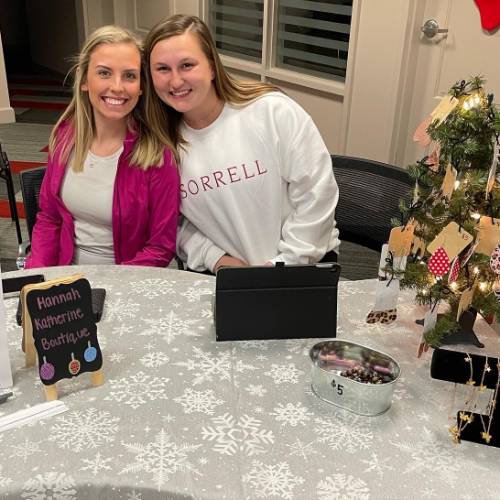 To wrap up the semester and kick off the holidays, the IDEA Bank welcomed the community to a holiday-themed market featuring 14 student-owned businesses.  Students were able to sell their products and promote their businesses to IDEA Bank visitors. It was a widely successful night with over 150 visitors and 80 purchases! 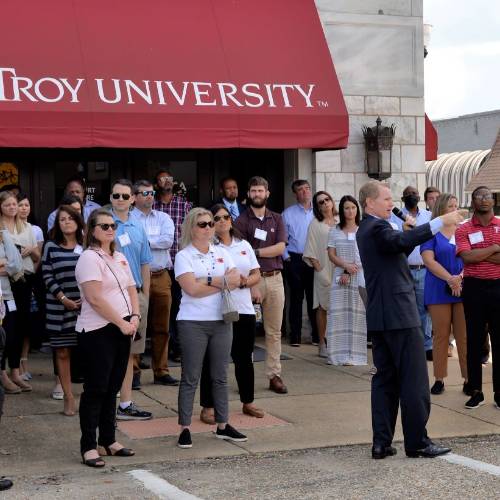 The IDEA Bank partnered with Auburn University's Government and Economic Development Institute to offer Placemaking as an Economic Development Tool,  which was an interactive workshop focused on making the best use of a city's public spaces to capitalize on a local community's assets, inspiration and potential.  Facilitated by Nathan Norris, Founding Princpal of CityBuilding Partnership LLC, the event drew more than 75 local leaders including Troy Mayor Jason Reeves and University Chancellor Jack Hawkins.

Entrepreneurship Week at the IDEA Bank

In August of 2021, the IDEA Bank partnered with Auburn's Government and Economic Development Institute to offer an Entrepreneurship Workshop, open to both students and members of the community.

In July of 2021, the Pike County Chamber of Commerce and its Young Professionals group gathered at the IDEA Bank for an evening of food, music, and networking. 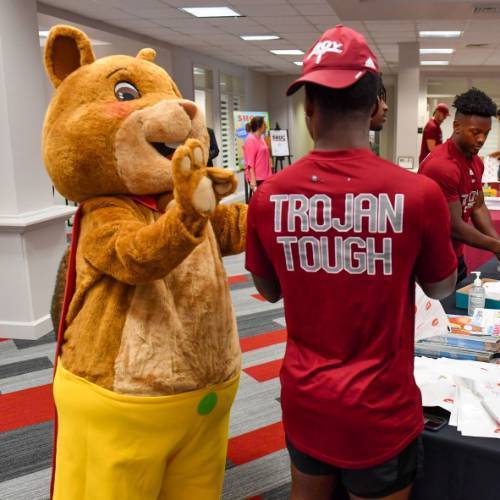 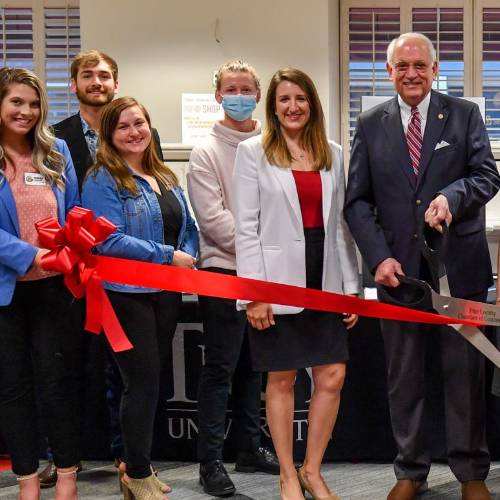 The IDEA Bank officially opened its door for full-time business in April of 2021. To kick off its inaugural year, University leaders, student entrepreneurs, and members of the community gathered to cut the ceremonial ribbon in front of the studetn entrepreneurs' office spaces and showcase the space.

Student-created businesses are thriving at the IDEA Bank!

As winners of the 2020 Sorrell College of Business Entrepreneurship competition, the following entrepreneurs are now operating and growing their businesses from the IDEA Bank. 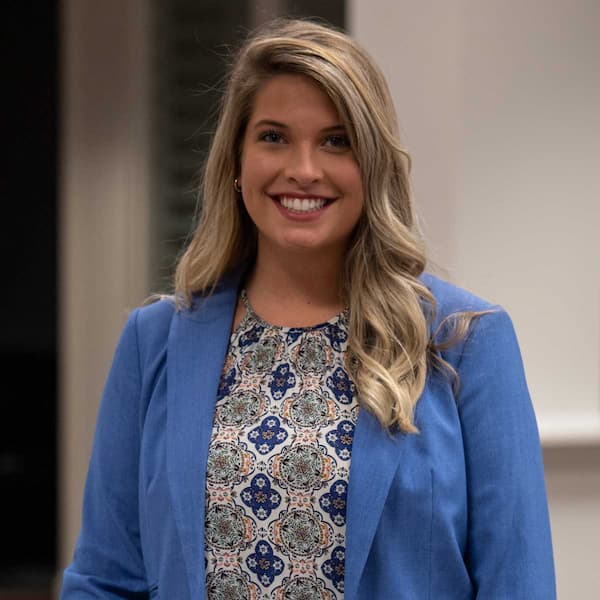 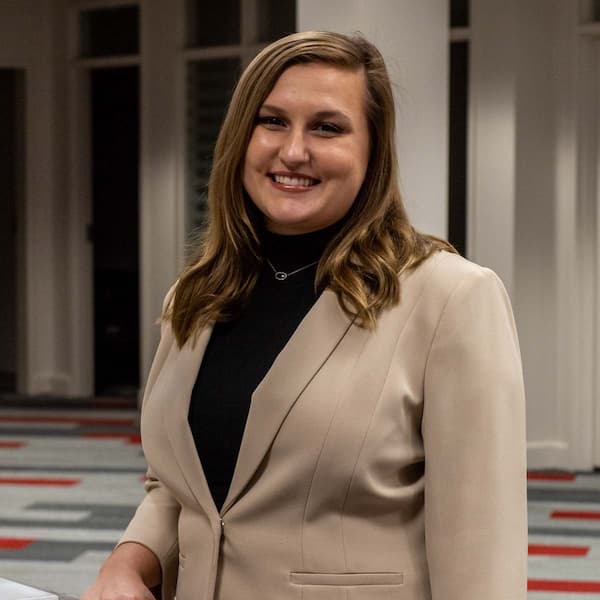 Hannah Katherine Boutique is a clothing boutique. Follow Hannah on Instagram @HannahKatherineBoutique to find the latest trends or click below to shop online. Hannah is currently a TROY student expected to graduate in 2023. 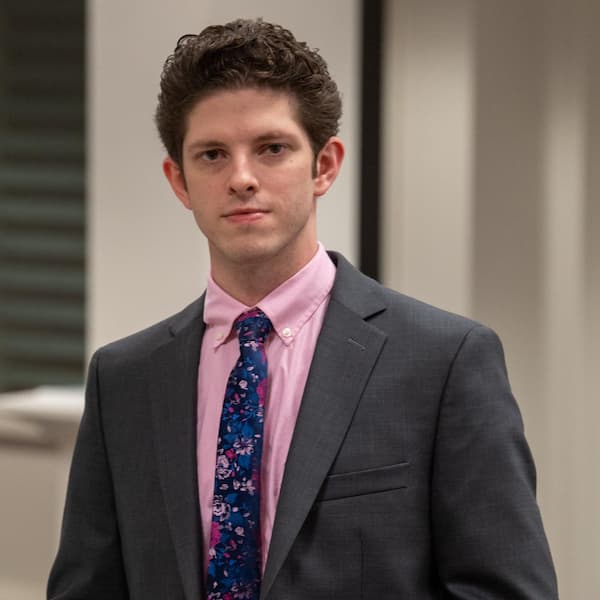 Krysala Gaming is a tabletop game developer bringing gaming to more affordable environments by reducing the "pay-to-win" aspects of competitive tabletop gaming as much as possible. Mark is a current TROY student expected to graduate in 2021. Click below to follow Krysala on Facebook and stay tuned for updates on their first game soon! 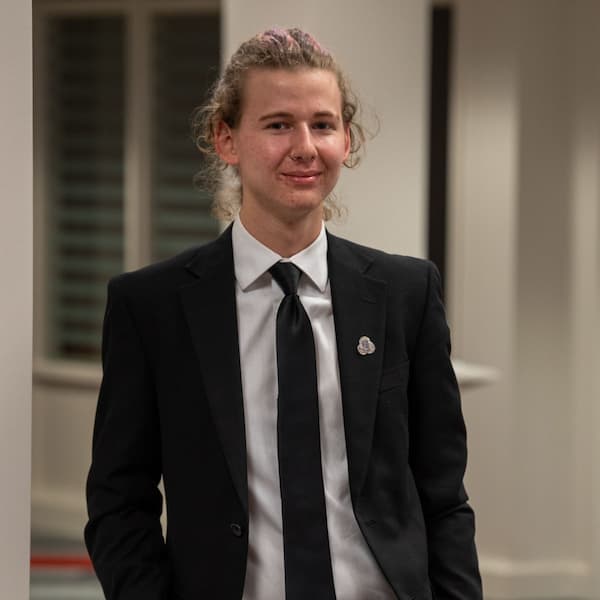 IDEA Bank Live is a YouTube Channel featuring original performances from local musicians, recorded live from the IDEA Bank. Dawson is a current TROY student expected to graduate in 2022. Check out the channel and email ideabanklive@gmail.com to get involved!

The State Normal School at TROY was established in 1887 under the leadership of school president, Joseph M. Dill. The institution was founded in downtown Troy, Alabama, where it was located for 42 years until the college moved to its present-day site. We see the opportunity to be back downtown as a sign of coming home for Troy University. This is where it all began over 130 years ago!