The Davis Theatre for the Performing Arts 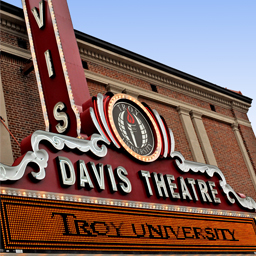 This grand theatre opened on January 25, 1930, as The Paramount Theatre. It was a Movie Palace, designed for the talkies and Vaudeville shows. Countless numbers of patrons not only enjoyed movies and shows in the palace, but many couples enjoyed their first date, first kiss or marriage proposal here. There were many weddings held on the stage of The Paramount! 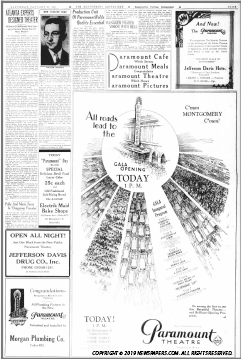 Gone With the Wind

In 1976, after the last feature Gone With the Wind, the majestic Paramount Theatre closed its doors. The theatre was purchased by Troy University and reopened in 1983 as The Davis Theatre for the Performing Arts. Named for the late Tine W. Davis and his wife Eunice, the major contributors to the restoration process.

The Davis Theatre is a downtown landmark and is one of only a handful of such theatre spaces still standing across the South. The acoustics are excellent, and with twelve-hundred seats, the size is perfect. It has a full-size orchestra pit, and the stage is easily seen from any seat in the house. There is a feeling of intimacy long since sacrificed in modern theatre design.

The Davis Theatre is ideal for Montgomery's needs in size, design and location; in the center of a revitalized downtown area where it is a perfect complement to the city's convention facilities.

The theatre hosts amateur and professional musicals, dramatic productions, chamber music groups, symphony orchestras, dance groups, ballets and instrumental performances of all types. Moreover, the theatre is available to civic, cultural and educational institutions to merge these programs with other activities to expand and enrich the life of the community. In the downtown Montgomery area, civic and convention groups have access to a lavish, nostalgic, first-rate, multi-purpose theatre.

As the health of our clients, patrons and employees are our top priority, the Davis Theatre is doing our part to help reduce exposure to the COVID-19 virus and taking precautions for our future events.

As we work to serve your event needs, a few changes have been implemented.  All visitors to the Theatre  are required to wear face masks and practice social distancing as we continue following the guidelines set forth by the CDC, Alabama Department of Public Health, local and state officials.

The Theatre is hosting events at reduced capacity.  Depending on event specifications, staff may arrange entrances and exits to fit the needs of the event. Temperature screenings will be conducted before events and masks are currently required.

It is each attendees responsibility to adhere to all social distancing guidelines.

We are closely monitoring the situation and will update accordingly.  Please be safe and we'll see you soon!

Reach us in the following ways:

or connect with us on our Facebook page:  https://www.facebook.com/troyudavistheatre/

We are currently reupholstering our seating, putting our theatre at limited capacity at this time.