The Life of Rosa Parks

Rosa Louise McCauley was born on February 4, 1913, in Tuskegee, Alabama, to James and Leona McCauley. At age two, her family moved to Pine Level, Alabama, to live with her maternal grandparents. Her mother, a school teacher, taught Rosa at home until age eleven when she moved to Montgomery to live with her aunt. She enrolled in a private school, the Montgomery Industrial School for Girls, where she cleaned classrooms to pay her tuition. Later she attended Booker T. Washington High School, but was forced to leave to take care of her sick mother. In 1932, she married Raymond Parks, to whom she would remain married until his death in 1977. Though Raymond had very little formal education, he was self-taught and supported his wife's desire to return to school. She received her high school diploma in 1934.

Mrs. Parks worked as a seamstress at Montgomery Fair department store in 1955. On December 1 of that year, she boarded a city bus and sat on a row in the middle section where black customers were allowed to sit. The whites only section in the front of the bus filled up and a white man was left standing. The bus driver demanded that Mrs. Parks and three other patrons in the middle section give up their seats so the white man could sit. The other three people moved, but Mrs. Parks had been pushed around enough and refused to yield her seat. She was arrested when the bus driver contacted the police and filed charges against her. Four days later she was found guilty of disorderly conduct and the Montgomery Bus Boycott began.

Over a year later, the city was served with papers declaring segregation of bus service unconstitutional. The next day, Mrs. Parks boarded a bus and for the first time was allowed to sit in any unoccupied seat. Her ordeal, however, was not over. She had lost her seamstress job and was unable to find work. Her family was harassed and threatened. In 1957, she moved (along with her mother and husband) to Detroit, where her younger brother Sylvester lived.

In 1965, she joined the staff of U.S. Representative John Conyers of Michigan and worked there until her retirement in 1988. Mrs. Parks traveled the country extensively lecturing on civil rights. Through the Rosa and Raymond Parks Institute for Self-Development, a non-profit organization she co-founded with Elaine Steele in 1987, she worked with young people to help them achieve their full potential. She has received honorary degrees from nearly a dozen colleges and universities and has received countless honors and awards. On April 22, 1998, she attended the groundbreaking ceremonies for the Troy University Rosa Parks Library and Museum to be located on the spot where she was arrested. On December 1, 2000, she returned to Montgomery to participate in the grand opening of the Rosa Parks Library and Museum, dedicated in her honor. Mrs. Parks and her family were the first to tour the new library and museum. 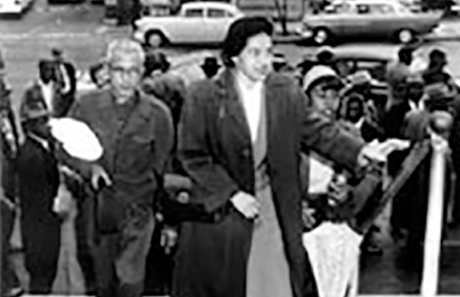 On Thursday, December 1, 1955, Rosa Parks was arrested for refusing to give up her seat to a white man on a public bus. In response, the Women's Political Council distributed fliers throughout the community urging African Americans to boycott the bus line on the day of Mrs. Parks's trial. The following Monday, Mrs. Parks was found guilty of disorderly conduct and fined. That afternoon, a meeting was held at Mt. Zion A.M.E. Zion Church and the Montgomery Improvement Association was formed.  Dr. Martin Luther King, Jr. was selected as the new organization's president.

That evening, a meeting was held at the Holt Street Baptist Church.  The attendees decided that continuing the bus boycott would be an effective way to protest the segregated bus service.

In terms of participation, the bus boycott was an immediate success. Virtually all of the African Americans who formerly patronized the bus service now walked, arranged carpools, or found other means of transportation. Despite the strong participation in the boycott and the financial hardship experienced by the bus company, the laws were not changed. The Montgomery Improvement Association filed suit in federal court on behalf of those discriminated against by the bus service. On June 2, 1956, a federal court ruled for the Montgomery Improvement Association and declared segregated bus service to be unconstitutional. The ruling was appealed to the United States Supreme Court which, on November 13, 1956, upheld the lower court's findings. The boycott ended on December 20, 1956—382 days after Mrs. Parks's conviction when the court order requiring integrated bus service was served to Montgomery officials.

The Dedication of the Rosa Parks Library and Museum 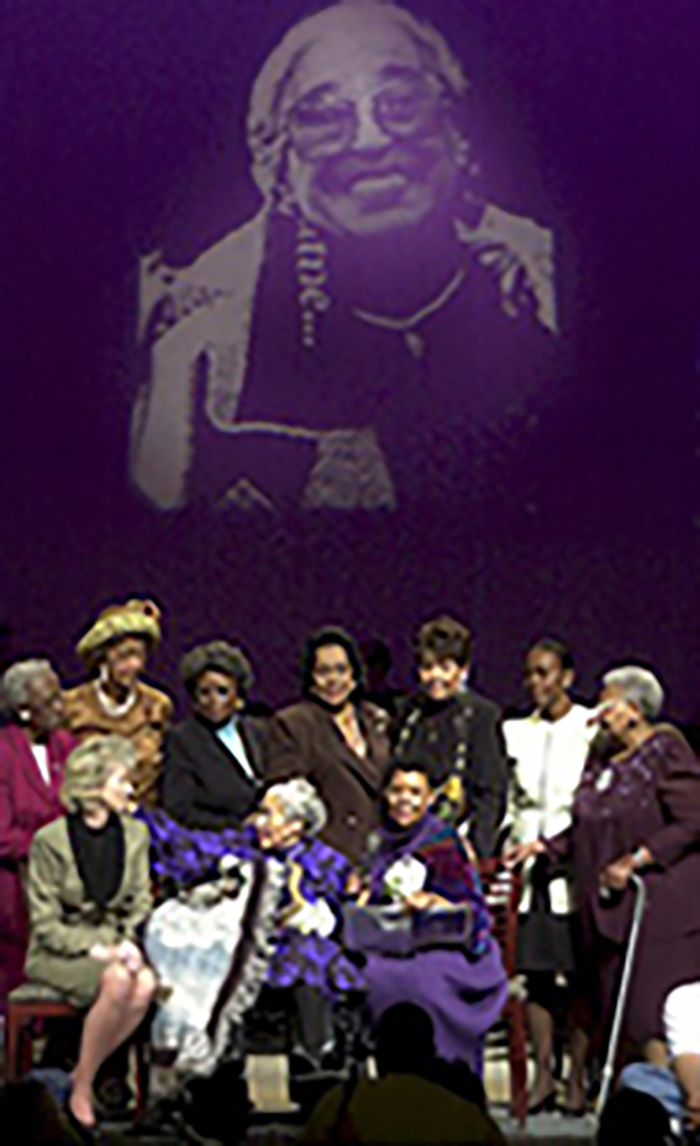 Rosa Parks, the "Mother of the Civil Rights Movement" was the guest of honor when Troy University dedicated its new library and museum. The library will carry Mrs. Parks' name and commemorates her refusal to give up her seat up on the Montgomery City Bus to a white man. The incident occurred on December 1, 1955, at the site where the library is constructed and the museum depicts the event and the ensuing activities in the 382-day Montgomery Bus Boycott.

"Troy University, Montgomery Campus seized the opportunity of preserving the memory of courageous acts and courageous people, while using the property to best meet the needs of our students," Dr. Cameron Martindale said. The structure is a three-story, 55,000 square-foot state-of-the-art library to more than 3,100 non-traditional urban Troy University, Montgomery Campus students and the citizens of Montgomery and a museum and research center for those who will strive to understand the event that began the famous Bus Boycott.

Dr. Jack Hawkins, Jr., Chancellor of The Troy State University System, stated: "I am very proud that Troy State University decided to undertake the creation of this unique museum. The Rosa Parks Library and Museum is an important part in the continued revitalization of downtown Montgomery, and it also serves both the community and the state as a focal point in our nation's history."

A tribute from the Women of the Movement was given to include Dr. Juanita Abernathy, Dr. Johnnie Mae Carr, Dr. Dorothy Height, Dr. Coretta Scott King, and Dr. Mamie Till-Mobley, and other dignitaries. There were other special presentations by Larry Long with the Youth of Rural Alabama, the Pathways to Freedom Youth, and the Troy State University Symphony Band and Gospel Choir.

The opening tour of the museum was at 5 p.m. Other events of the day included lectures at 9:30 a.m. by Dr. Douglas Brinkley, author of "Rosa Parks", and at 10:30 a.m. by Vernon Jarrett, veteran journalist and historian, in the auditorium of the Rosa Parks Library and Museum. Also, an exhibition of Yvonne Wells' colorful, narrative quilts depicting the Civil Rights Movement was on display at the museum. A Parade of Choirs entertained outside the Troy University Montgomery Campus before the program begins in the Davis Theatre.

Quotes from the Dedication of the Rosa L. Parks Museum 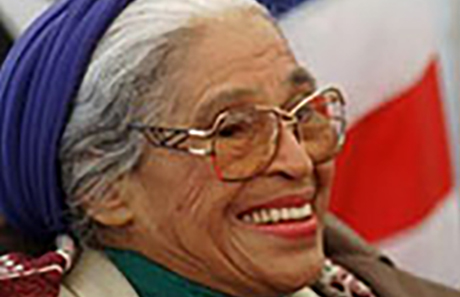 "In 1955, when I was arrested... I had no way of knowing what the future held. I certainly never thought I would be remembered in such a grand manner... The students of the future, and all of us are students, will benefit from the opportunity Troy State University is providing..."
— Ms. Rosa L. Parks

"For too long, Alabama has lived in the shadow of its past. But this event is not about yesterday, it is about tomorrow. This dedication certainly stands as a shining example of how far we've come and how much better we can be, if we can step beyond the shackles of the past..."
— Dr. Jack Hawkins, Jr., Chancellor,
Troy University 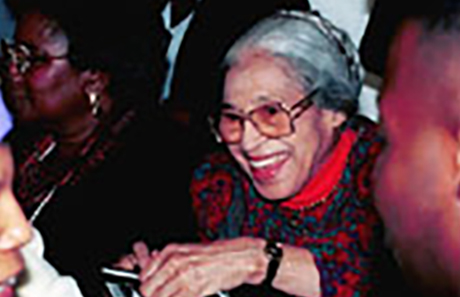 "Today is a historic day as we recognize that the past, present and future have come together as this courageous woman, the university and the city of Montgomery join hands to celebrate change... This museum is a monument to an ordinary person who had the extraordinary courage to make a difference..."
— Dr. Cameron Martindale, Former President,
Troy University Montgomery 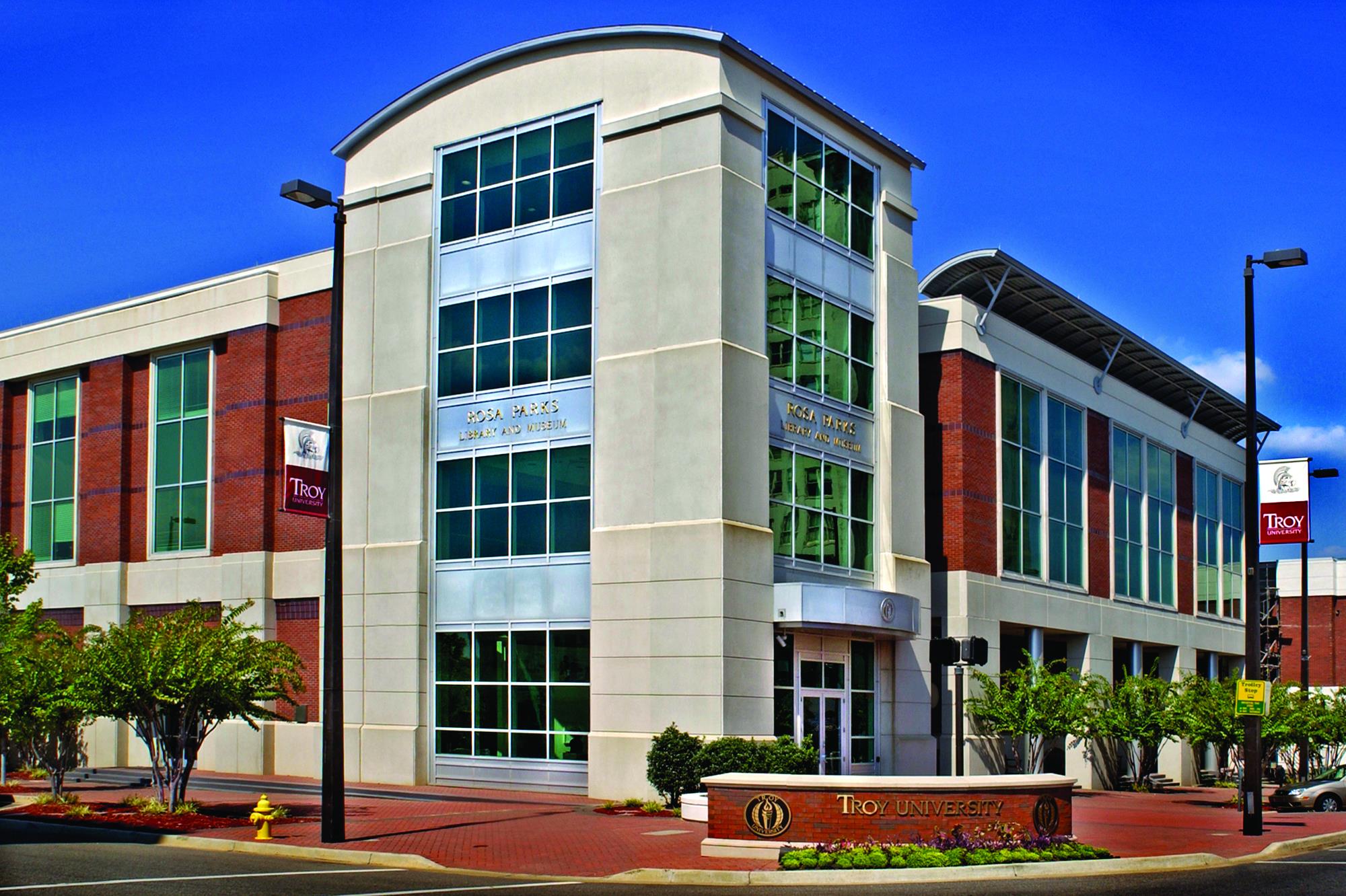 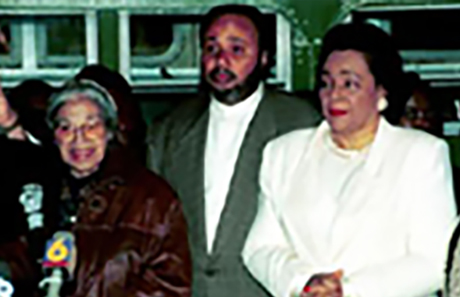 "It is not a trail; it is not a park. It's a living example of what individuals can do if they put their minds to it..."
— Mr. Lamar P. Higgins, Trustee, Troy University and Member of the Museum Advisory Board