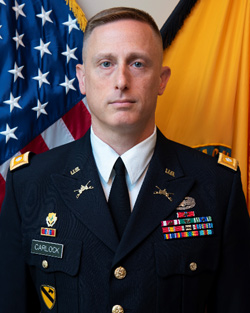 Lieutenant Colonel Paul Carlock is from Chattanooga, Tennessee and was commissioned as an Armor Second Lieutenant in 1998 upon graduation from North Georgia College and State University.

His first assignment was as a Tank Platoon Leader in the 1st Battalion, 68th Armor Regiment, 14th Infantry Division, Ft. Carson, Colorado. He then moved to Fort Knox, Kentucky and served as the Executive Officer for the Headquarters and Headquarters Company, 2nd Battalion, 81st Armor Regiment, 1st Armor Training Brigade. He was next assigned to the Battalion Adjustment and later assistant S3 for the 3rd Battalion, 8th Cavalry Regiment, 1st Cavalry Division at Fort Hood, Texas, during which he deployed to Iraq for Operation Iraqi Freedom. He then took command of Delta Company, 1st Battalion, 12th Cavalry Regiment, 1st Cavalry Division where he then deployed to Iraq during the “Surge” of U. S. forces from 2006-2008.

His next assignment was as a Battalion S3 Observer/Controller-Trainer at the National Training Center, Fort Irwin, California. He then served as the Brigade Executive Officer Observer/ Controller-Trainer, the Executive Officer for the Operations Group, and as the Chief, Leader training Program at the National Training Center, Fort Irwin, California. Most recently, he was assigned to Training and Doctrine Command Headquarters at Fort Eustis, Virginia where he served as the Chief, Strategies and Policies Division, G-3/5/7. He assumed the position of Professor of Military Science at Auburn University in Montgomery, Alabama in 1 August 2018.

His awards and decorations include the Bronze Star Medal (2 OLC), the Meritorious Service Medal )2 OLC), the Army Achievement Medal (1 OLC), and the Combat Action Badge.

Lieutenant Colonel Carlock is married to the former Allison Spencer of Austin, Texas. They have two children; Shelby (9) and Alyssa (5).