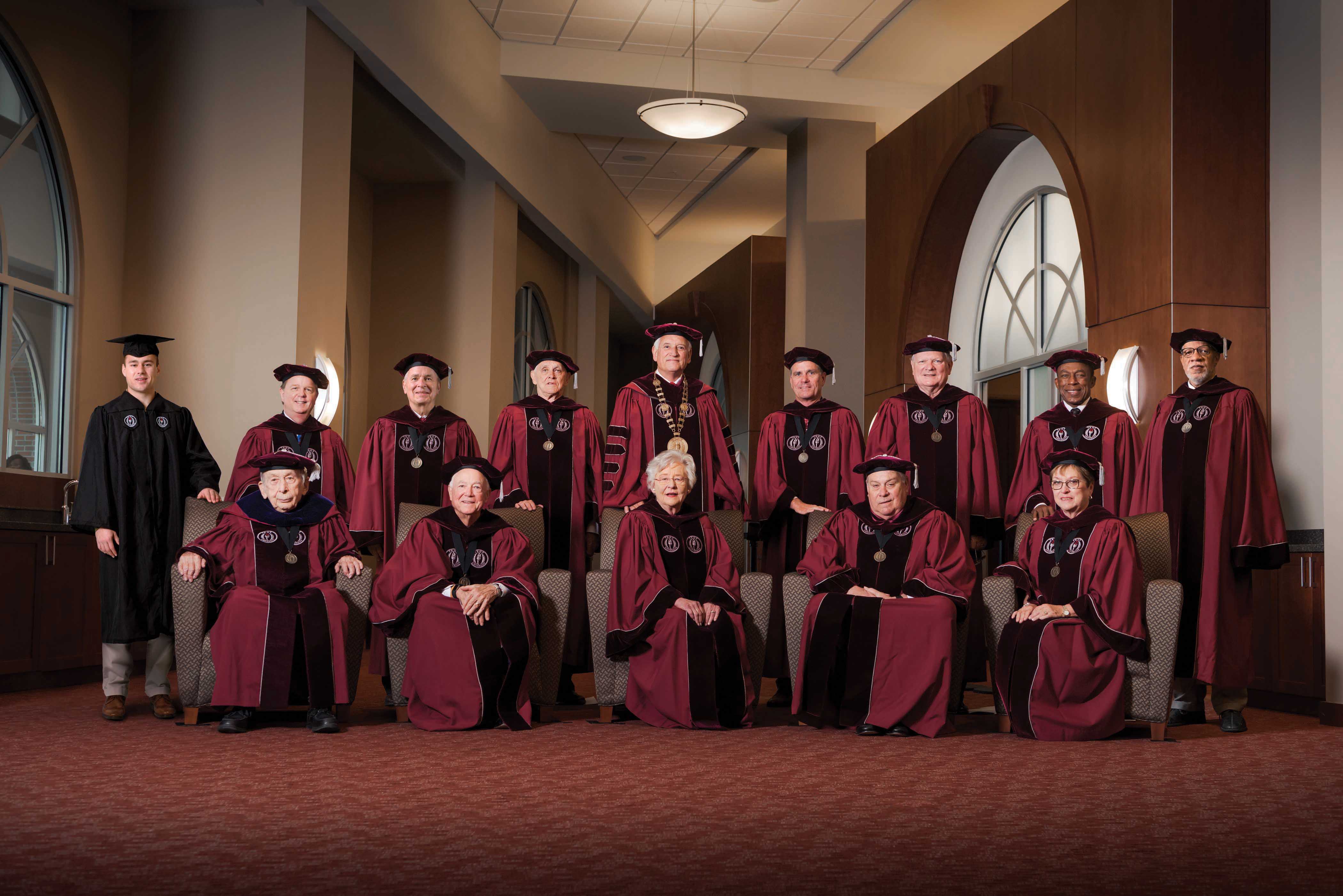 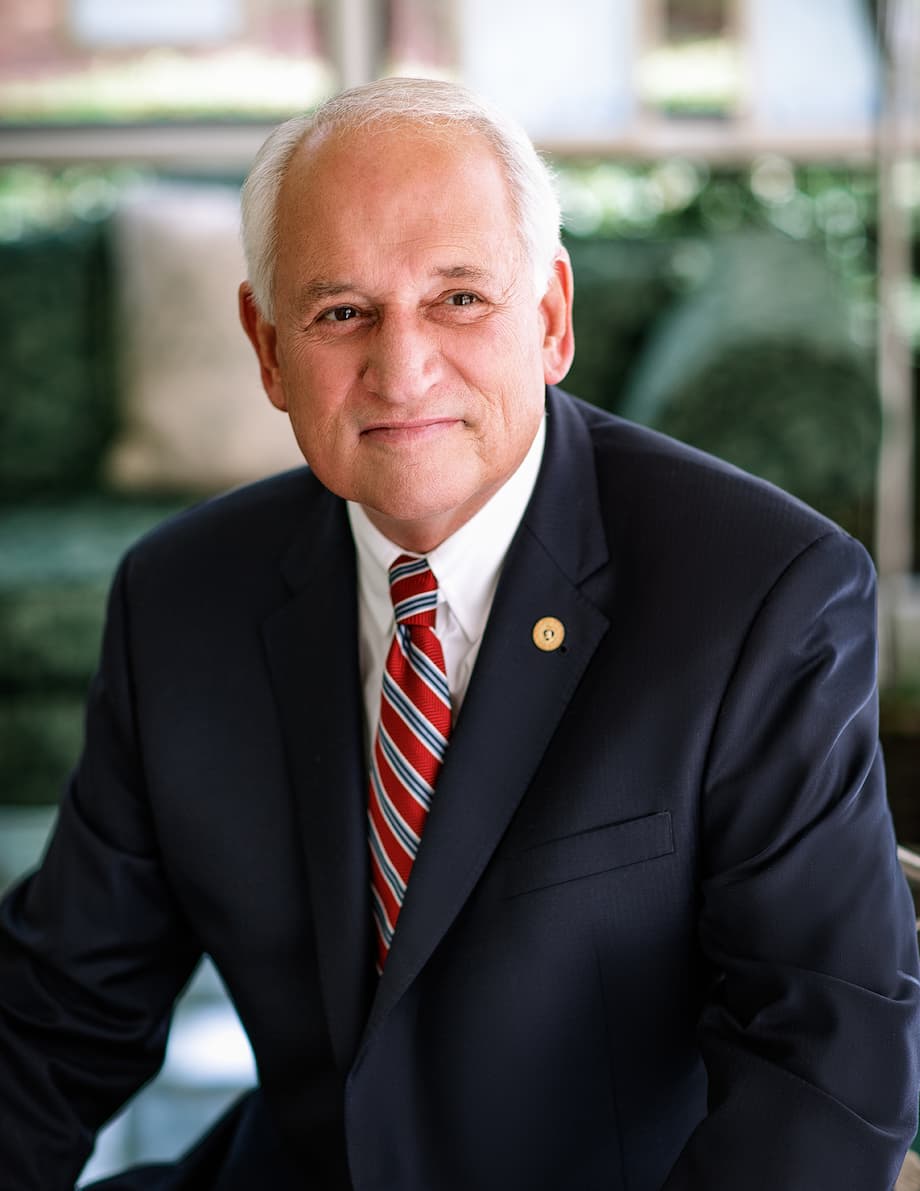 Upon completion of his bachelor’s degree in 1967, Hawkins was commissioned a lieutenant in the U.S. Marine Corps and served as a platoon leader during the Vietnam War.  For his combat duty, he received the Bronze Star, the Purple Heart and a citation from the Korean Marine Corps.

Hawkins has overseen an era of change and growth at TROY, as he led the merger of the worldwide Troy State University System into the unified Troy University, an initiative called “One Great University.” More than $350 million has been invested in capital improvements by the Hawkins Administration, including new academic buildings on all four of TROY’s Alabama campuses. Chancellor Hawkins served as the catalyst for the University’s evolution to an international institution, as TROY has attracted record numbers of students from other nations and established teaching sites around the world. During his tenure, academic standards for admission have been increased, new degree programs were established in all academic colleges, and intercollegiate athletics joined the highest level of NCAA competition.

Hawkins’ professional background includes his service as an assistant dean at the University of Alabama at Birmingham (1971-1979) and as president of the Alabama Institute for the Deaf and Blind in Talladega (1979-1989).

In 1985, he was honored by the University of Montevallo as Distinguished Alumnus of the Year, and was the recipient of the 2003 All-American Football Foundation’s “Top College President” Award.   In 2005 he was inducted into the Hall of Fame of Murphy High School in Mobile, Alabama.  In 2007 he was recognized as the “Alabama Citizen of the Year” by the Alabama Broadcasters Association. In 2011, Dr. Hawkins was recognized with the Chief Executive Leadership Award presented by the Council for the Advancement and Support of Education (CASE) and as the March of Dimes River Region Citizen of the Year. In 2012 he received the Distinguished Public Service Award from the Secretary of the Air Force for his service on the Air University Board of Visitors from 2004-2012. In 2014 he was one of nine university presidents/chancellors worldwide—and the only one in North America—to receive the World Confucius Institute's Individual Performance Excellence Award. In October 2016 Dr. Hawkins was inducted into the Alabama Academy of Honor.

Three buildings are named in his honor: the “Jack and Janice Hawkins Chapel” at the Alabama Institute for the Deaf and Blind, the “Hawkins-Adams-Long Hall of Honor” and “Jack Hawkins, Jr. Hall” which serves the College of Education of Troy University. Hawkins was profiled as part of two books published in 2004: “Above and Beyond: Former Marines Conquer the Civilian World” by Rudy Socha and Carolyn Darrow and “The Entrepreneurial College President” by James L. Fisher and James V. Koch.

Hawkins serves on the board of directors of the Daniel Foundation, the Bennie Adkins Foundation, Business Council of Alabama, the American Village Trust, College Football Playoff Board of Managers, and Troy Bank and Trust Company.  He has served as chairman of the Governor’s Committee on Employment of the Disabled, Board of Visitors of Marine Corps University, Better Business Bureau of Central Alabama, and past President of the Sun Belt Conference. He has also served on the Board of Directors of the American Association of State Colleges and Universities (AASCU), as Chairman of the Council of University Presidents in Alabama, as President of the Southland Football League, as chairman of the Air University Board of Visitors, as a trustee of Talladega College, the Helen Keller Eye Research Foundation, and the American Foundation for the Blind.  He is a member of the Troy Rotary Club.

Dr. Hawkins is married to Janice Hawkins and they have two daughters, Katie, a former officer in the USAF who is married to Air Force Col. Dan Beall; and Kelly Godwin, an attorney and member of the Troy University faculty who is married to Adam Godwin, a former professional baseball player and a member of the Troy University baseball staff.  Dr. and Mrs. Hawkins are the proud grandparents of Noah and Ellyotte, who live in Maryland, and Micah Mae, who lives in Montgomery.