The study recommends both immediate policy initiatives, and offers long-term policy goals to increase freedom and prosperity in Alabama.

Improving Lives in Alabama: A Vision for Economic Freedom and Prosperity (PDF)

By Dr. John Merrifield and Jesse A. Ortiz Jr.

There are policies that Alabama could adopt to promote school choice and educational accountability:

We’re recycling policies with a track record of costly disappointment:

"A cure for the Common Core," Troy Messenger

"A better way to spend more on education," Troy Messenger.

By Dr. Scott A. Beaulier

If steps aren’t taken to address this shortage, the money working Alabamians have been promised, and expect to receive, might not be there when they retire.

The good news is that there are steps Alabama can take now to close this funding gap and avoid crises like we’ve seen in cities like Detroit, MI and Central Falls, RI.

Alabamians young and old will suffer the consequences of the funding shortage:

How Did This Happen?

Faulty accounting and government mismanagement of funds created this crisis:

"Study: Alabama Pension Funds Could Run Out in Decade," Washington Examiner (May 20th, 2014).

"Study: Alabama Pension Funds Could Run Out in Decade," DecaturDaily.com (May 19th, 2014).

"Study: Ala. Pension Funds Could Run Out in Decade," Alabama Public Radio

"Should Alabama switch to appointed judges? Study argues it would improve economy," AL.com

By Dr. Adam B. Lowther

Each study draws on the latest and best research on state policy issues to identify trends and determine what policies lead to a strong economy and greater well-being.

The studies, therefore, use research available about Alabama including policies that impact its economy, its economic freedom ranking, its unemployment numbers, and the state of its schools, among other measurements of economic health and societal well-being, to recommend policy reforms that will enhance freedom and prosperity in Alabama. 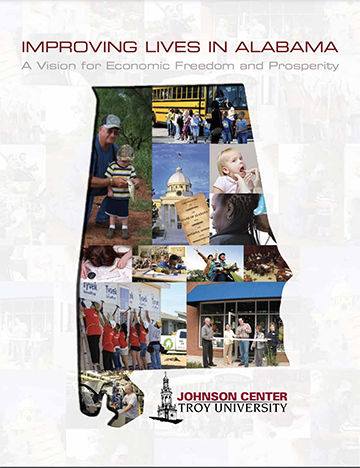 IMPROVING LIVES IN ALABAMA:  A Vision for Economic Freedom and Prosperity