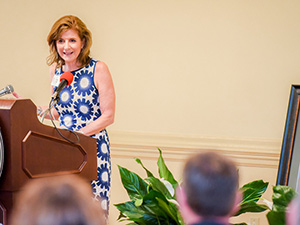 What a day we all have had. The quote that keeps going through my head is one by George Santayana: “Those who cannot remember the past are condemned to repeat it”. It makes me wish more and more people could do what we did today. A lot of important history right here in this town. And yet there’s still so much work to do for civil rights.

I’m Patti Baum, and I was Charles’ wife. I just want to take a few minutes to talk about why we are here; what inspired this gift.

In January 2016, a few months after Charles died; I went with one of my daughters and her husband to see Hamilton on Broadway. Hamilton, the musical, celebrates history and honors a great man’s legacy, a man many of us didn’t really know a lot about before the book and the show.

After Hamilton’s death, there’s a poignant line that says …”who lives, who dies, who tells your story”.

His wife Eliza asks what Hamilton might have done if he hadn’t run out of time. Eliza vowed to preserve her husband’s legacy, and one of the things she was most proud of was that she founded an orphanage in Hamilton’s name, an orphanage which still thrives today in New York City.

I walked out of the show weeping, and said to my daughter, “I have to find my orphanage.”

Quite simply, I wanted to find a meaningful place to tell Charles’ story. I asked myself, “What would Charles have done if he he’d had more time?”

And then I remembered an email he wrote to his friend Jim. Jim had just seen the movie, Selma, and he asked Charles what it was like to grow up in Montgomery in the 50’s. It was Charles’ answer to the question in an email that inspired me to make this gift.

For those of you who have heard this, I apologize. But I think it’s worth hearing again.

The movie which captures me and my family is not Selma but Driving Miss Daisy.

However, your questions are very timely as I have been thinking about those times and my family's reactions to the civil rights movement a lot recently---so, here goes perhaps more than you want:

Background: In the mid 1950's and 1960's, my father was a prominent Montgomery businessman and civic leader--President of almost everything--the Kiwanis Club, Chamber of Commerce, United Appeal, etc.--and honored as Man of the Year by the YMCA--all pretty big deals in a small-ish southern town, especially for a Jew. My grandfather, and I kid you not, was known by everyone as "Colonel", an honorary, non-military title awarded him by an Alabama Governor in the 1940's, I suppose. My father was active in politics himself--never as a candidate but as an advisor/fund-raiser. They both were--and I grew up as-- FDR/New Deal Democrats. Both my grandfather and father were also each Directors of one of the two large local banks--the 'Jewish seat' of those banks' boards I guess. Throughout school (large, public, segregated), my sister and I were also sort of big fish in a small pond--sports, class offices, etc. Johnny, my brother, too, I'm sure, but he was nine or so when I went to college.

So what our family had, on the one hand, were comfort, security, and a certain prominence plus the attainment of much-prized assimilation.

But, on the other hand, there must have been a feeling that all of this was perhaps built on less-than-firm ground. We were assimilated but still Jewish and members of a very small minority. The times were politically strained of course. There was McCarthyism before the high tide of civil rights. I remember distinctly a local politician who was a perennial seeker of many state/local offices in the mid-late 50's--and he was a true anti-Semitic fringe candidate who always ran on a platform against the "Communist-Jewish Conspiracy" and would go on TV and rant and rave and invariably mention my father by name as a supporter of his opponent.

And so the desire to protect our vested interests came at a cost--very important in hindsight: we were taught not to rock the boat lest we put our 'position' at risk. The long-time Rabbi in Montgomery was very much like this as well---prominent in the community but a protector of the status quo. Like most (not all) southern Rabbis, he preached tolerance for others and support of the oppressed--but of a timid sort--not speaking out, not joining marches. He (and we) were not so keen on promoting true change as we did not want our privileges to change.

Privately and at home, my parents were "liberal" on racial matters in the sense we were taught to be respectful of Negroes (never would the N word have been tolerated) and to support black and white charities, schools, etc.. We had a black cook, maid, baby sitter, gardener etc.and 'treated them nicely' with genuine concern and affection--picture the (few) proper white people portrayed in The Help.

So, the bottom line: I grew up as a democrat, liberal (certainly relative to the time and place) and felt 'sympathetic, kindly' to the black people (all in a lesser station, no social friends) in our lives. What we were not were brave. Nor courageous. Nor willing to risk our own comfort for a greater cause.

During the 1955-56 bus boycott (I was in my early teens), we would drive our help to and from their homes--sort of subverting the intent of both sides--protecting the people who worked for us and our own comfort. At Princeton (Freedom Rider time) and Harvard (Selma) I would object to broad critical generalizations against the south, point out northern hypocrisy but was certainly 'for' the goal of civil rights. I was actually at the March on Washington and heard King's 'I Have a Dream' speech and remember being totally inspired by it--but, typically, I was not there as a marcher but rather as a spectator--I was working as a summer intern for the Commerce Dept. right on the mall. That year (1963), as one of three Jews in Cottage Club (an Eating Club proud of its 'southern' tradition), I was in favor of but not outspoken for the selection of its first black member. (He was denied admission).

So, finally, to answer your questions, I did not find the time particularly "hard". I was not engaged in the struggle actively at all, though my sympathies were with the movement. I feel worse about my behavior looking back than I think I honestly did at the time. I know I was not at all brave but kind of gave myself a quasi -pass because 'my heart was in the right place’.... HOWEVER, the words that still make me cringe and feel shame are these by Martin Luther King:

"History will have to record that the greatest tragedy of this period of social transition was not the strident clamor of the bad people, but the appalling silence of the good people."

So you see, I wanted to be sure that Charles’ story was told, and remembered. I want his children and grandchildren to know what his life was like growing up in Alabama during a period of great unrest. I want them to know why he encouraged all of us to speak out and stand up for what is right. I want them to know who he was, about how much he loved all of us, about his quick wit, his brilliance, his love of education and especially history, and his commitment to just causes - I wanted to do something that Charles might have done had he not run out of time. And I also wanted to honor his Alabama roots.

So I asked Charles’ brother, John, to come with me to Montgomery to visit this museum. All we had to do was meet Dr. Felicia Bell to know we were in the right place. Dr. Bell outlined her vision, her plans for summer camps for under- served children of Alabama, and her hopes to spread Rosa Parks’ message, but in a new more contemporary way – to promote self-esteem and empowerment, and to teach young children about bullying. I’m not sure any of us sitting there that day envisioned this weekend!

One might not immediately think so, but Charles and Rosa Parks actually had a lot in common. Now please know that I’m not comparing the significance of their places in history, and of course they both had very different life experiences in Montgomery. And so you might ask, what would a white Jewish man who lived most of his life in Baltimore have in common with a Southern woman of color? Well… they both had profound humility, a strong sense of decency, a truly good soul, and the determination to fight for their beliefs. They both had Southern grace. They both valued education and had open minds; neither carried any hate in their hearts. They were authentic, gentle and kind, and fiercely loyal to their friends. They both deeply loved family.

It is a tribute to both of them that all of you are here. I thank you for being here.

Charles was so proud of his son Matthew. Matt is now head of the history department at Gilman School, one of the finest schools in Baltimore. Matt also taught for two years at Montgomery Academy after he graduated from Brown.

Matt is husband of Deb, and more importantly, father of Beatrice and Max. And loving brother to Katie, Staci, and Beth.

It’s only right that Matt introduces David Shapiro, his lifelong friend and our keynote speaker.