Talladega, the seat of Talladega County, was incorporated in 1835. Two former slaves founded Talladega College on November 20, 1865. The college soon outgrew its first location, so college leaders, with assistance from the American Missionary Association, purchased Swayne Hall and 20 acres in 1867. Talladega College was the first institution in Alabama to admit qualified persons of any race or ethnic origin. Savery Library was built in 1939 and is home to the Amistad Murals by famed artist Hale Woodruff. 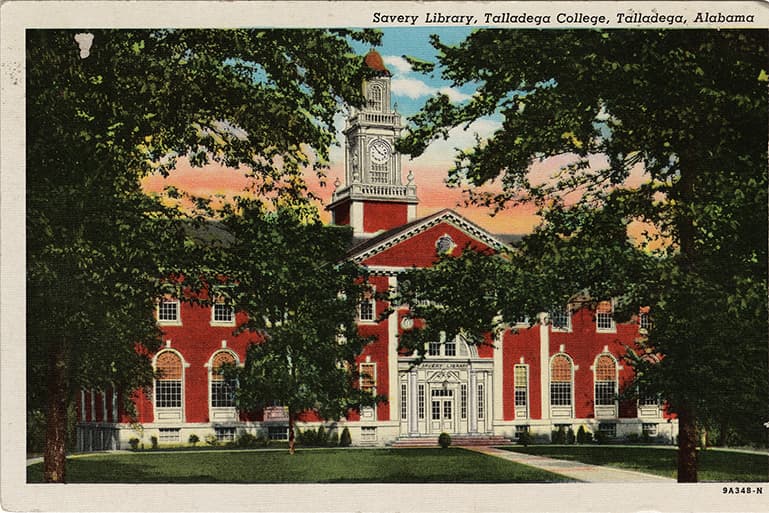 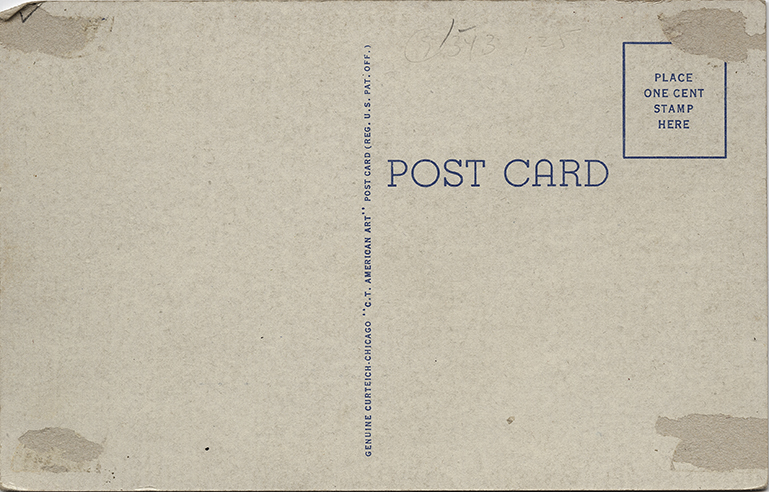 Birmingham, the county seat of Jefferson County, was founded in 1871 by investors of the Elyton Land Company who envisioned a New South iron industry near abundant deposits of iron-ore, coal, and limestone. They bought land in Jones Valley in hopes of building a boom town. Railroad surveyor John Milner, tasked with deciding where two railways intersected, ran the tracks along the southern boundary of the company’s holdings. The city was named for Birmingham, England, the center of that country's iron industry. This postcard shows the courthouse and post office which was completed in 1893. 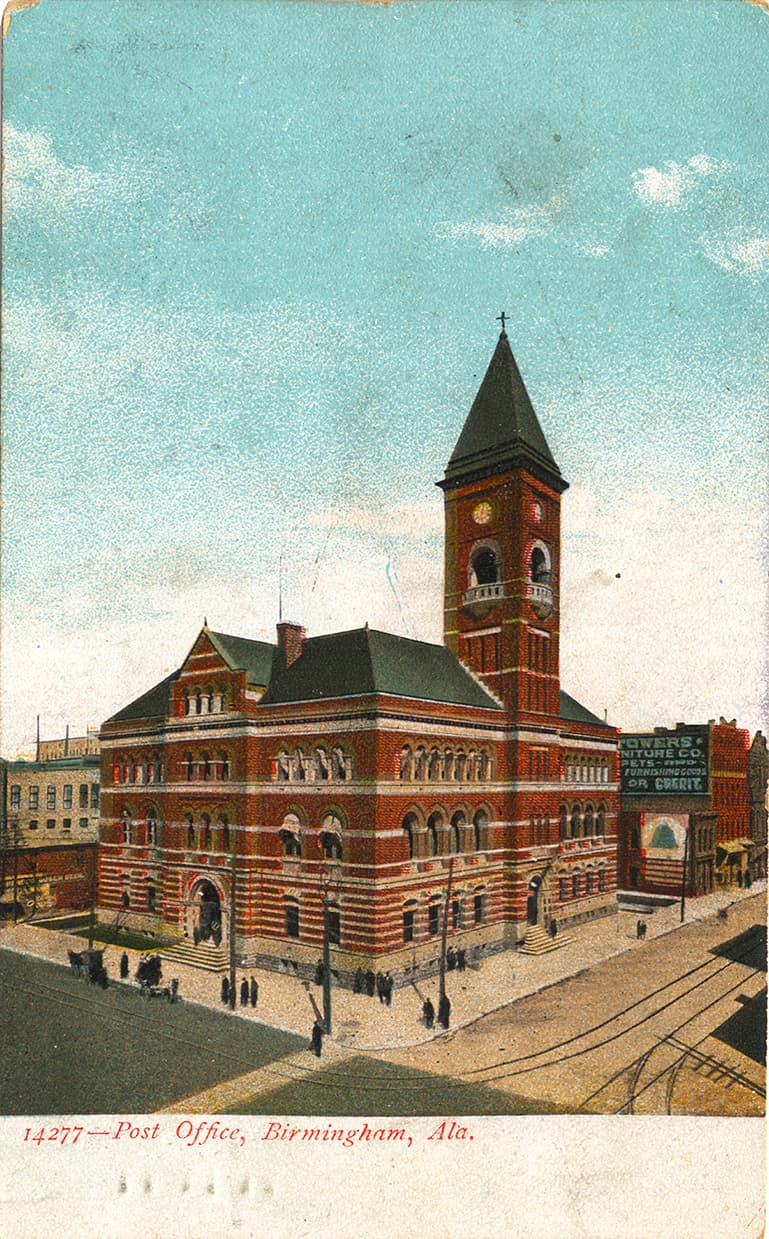 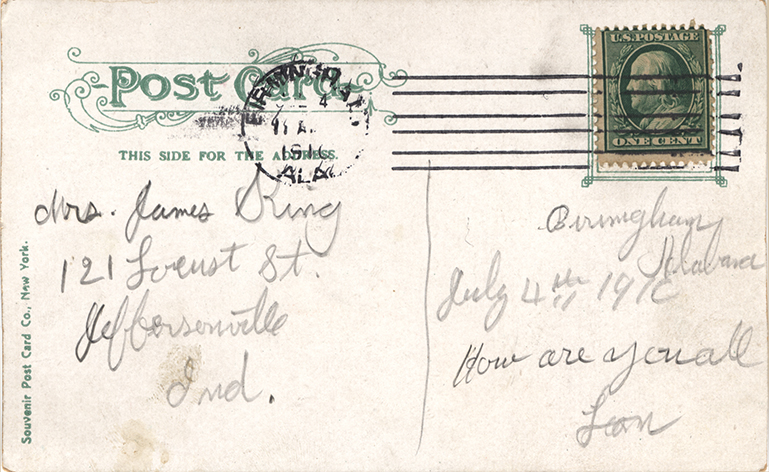 The Paul Hayne School in Birmingham was located on the corner of 5th Avenue South and 20th Street. It was named for South Carolina-born poet Paul Hamilton Hayne. In September 1930, the school was converted from an academic high school into an “opportunity school” to provide specialized classes in printing, drawing, radio, machine shop, pattern making, painting and decorating, commercial art, auto mechanics, electrical work, salesmanship, sewing, and tea room/cafeteria management. Students’ days were split between academics and trade-related practical instruction. This is a postcard of the school in the 1890s. 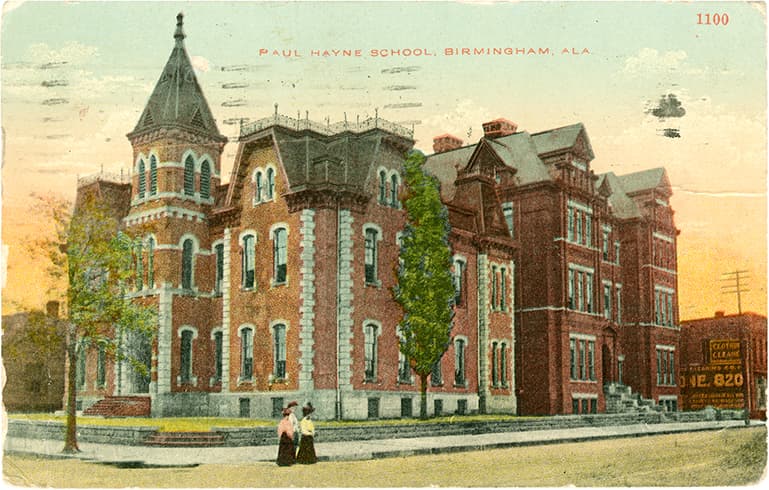 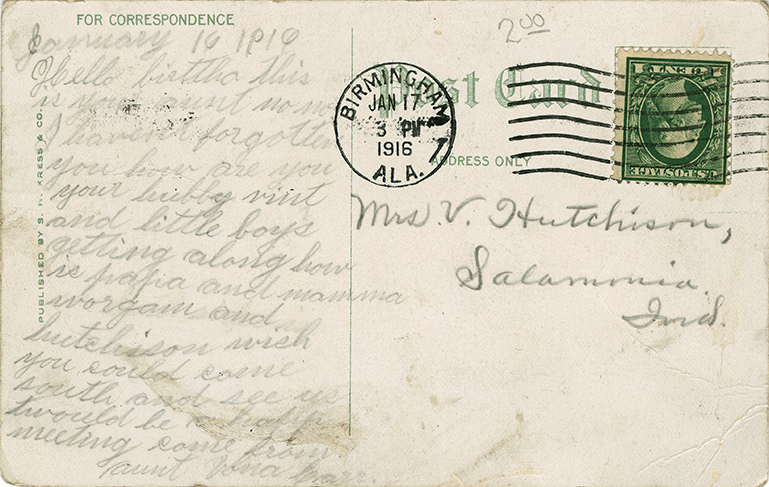 January 10, 1916 Hello biettha this is your aunt no no I havent forgotten you how are you your hubby visit and little boys getting along how is papa and mamma worgam and hutison wish you could come south and see us twould be [illegible] meeting come from. Aunt [illegible] Addressed to: Mrs. V. Hutchinson, Salamonia. Ind.

In 1886, industrial magnate Henry Fairfield DeBardeleben (son-in-law of Alabama industrialist Daniel Pratt) founded Bessemer as a steel center. He built several blast furnaces and bought 4,000 acres for the new town. The first lots were sold in April 1887, by June the town had 1,000 residents, and by September it was incorporated. The town was nicknamed the “Marvel City” because of its phenomenal growth. The first city hall, built in 1889, burned in the mid-1930s. The city hall in this postcard was constructed in phases from 1937 to 1941. The clock is original to the old city hall. 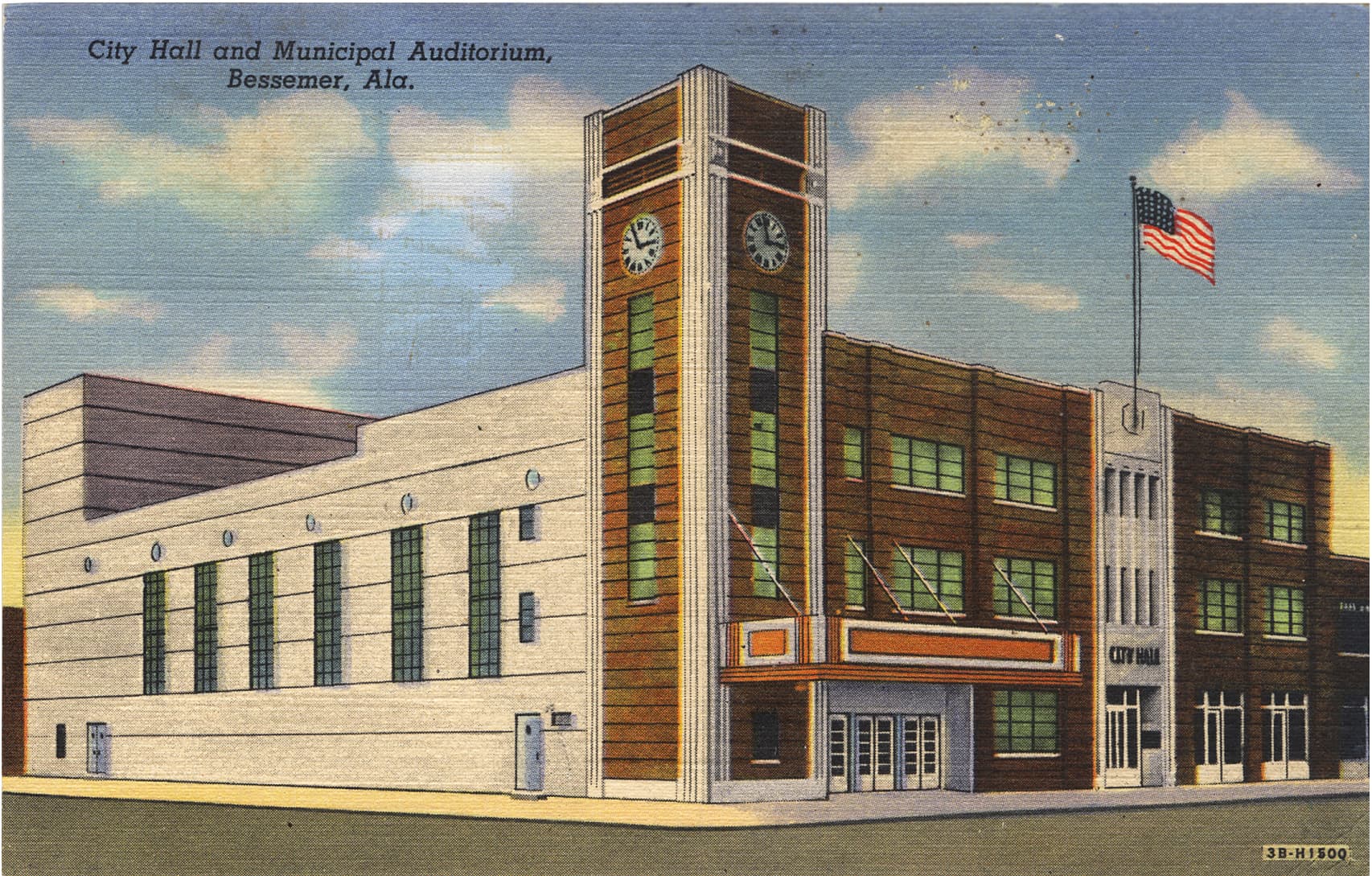 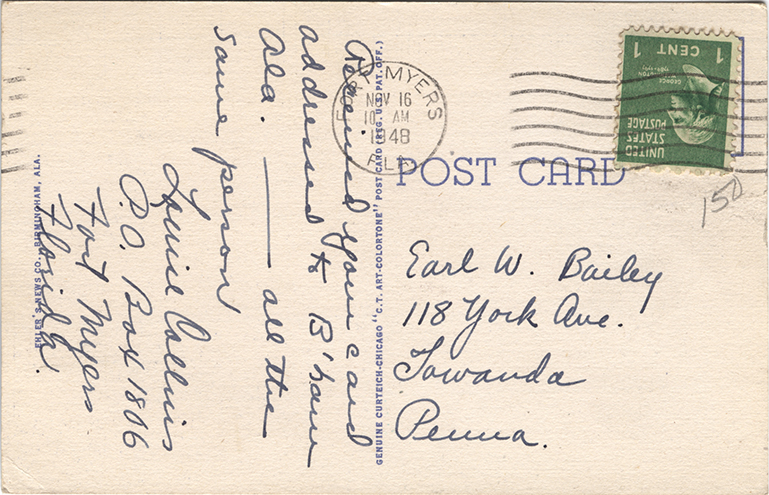 Calera, a city in Shelby and Chilton counties, was settled in the early 1820s and incorporated in 1887. It was called Buxahatchie until it became a center of lime production and was named Limeville, Lime Kilns, Lime City, and Lime Station in succession. In 1869, the name was changed to Calera, the Spanish word for lime. In the background is the Calera Methodist Episcopal Church, established in 1883. Calera Baptist Church, in the foreground, was built in 1884. Legend has it that the church was built with two steeples because the church members couldn't agree on round or square. The postcard sender indicated with an X the church they attended while visiting in December 1906. 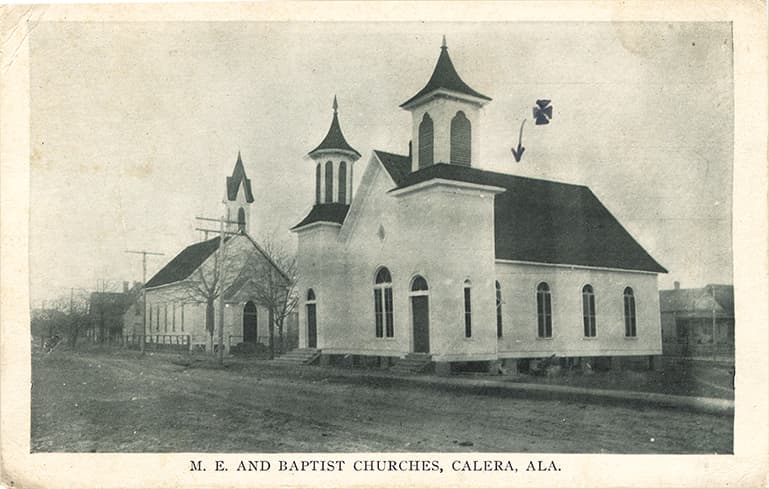 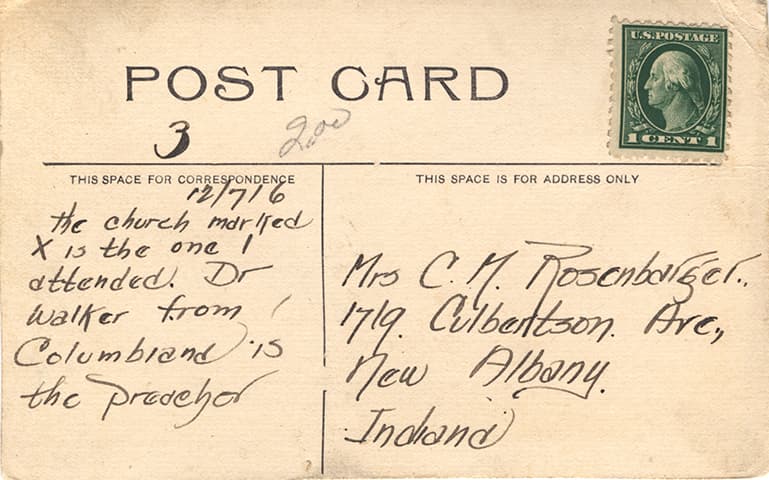 12/7/6 the church marked X is the one I attended. Dr. Walker from Columbiana is the preacher Addressed to: Mrs. C. M Rosenberger 1719 Culbertson Ave., New Albany. Indiana

Tuscaloosa is the seat of Tuscaloosa County. It was founded in 1819 and named after Indian chieftain Tascaluza. Tuscaloosa incorporated on December 13, 1819, a day before Alabama was admitted to the Union, and served as the state capital from 1826 to 1846. The “Up-To-Date Club” established the Tuscaloosa Public Library in two rooms of the courthouse in 1911. The clubwomen provided the library, furnishings, books, and staff. The library occupied the historic Jemison-Friedman home, shown here, from 1958 to 1979. 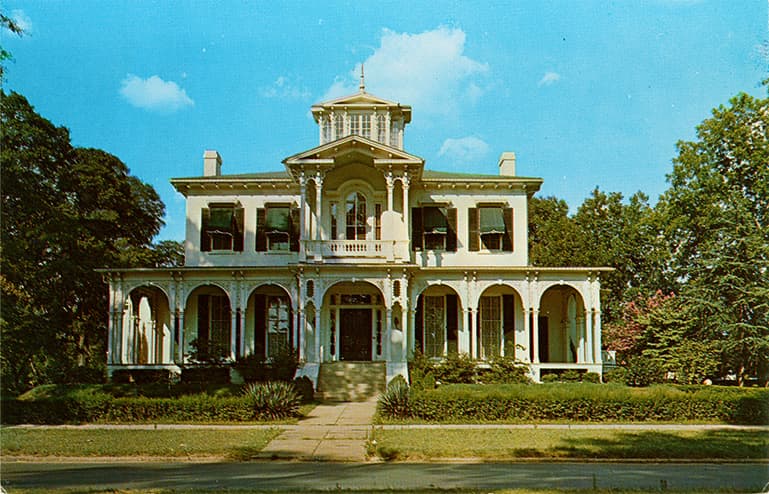 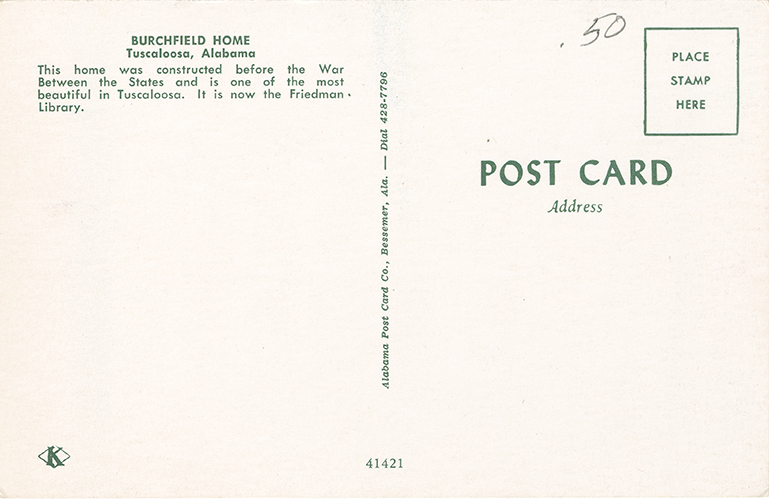 In 1818, the federal government authorized Alabama Territory to set aside a township for the establishment of a “seminary of learning.” In 1820, the state established that seminary, dubbing it “The University of the State of Alabama.” Tuscaloosa, Alabama’s capital, became the location for the University that opened on April 18, 1831. Smith Hall, named for state geologist Eugene Allen Smith who served from 1873 to 1927, was built in 1909 to house the Alabama Museum of Natural History, the Department of Biology, and the Department of Geology. The hall still contains classrooms and labs used by students today. 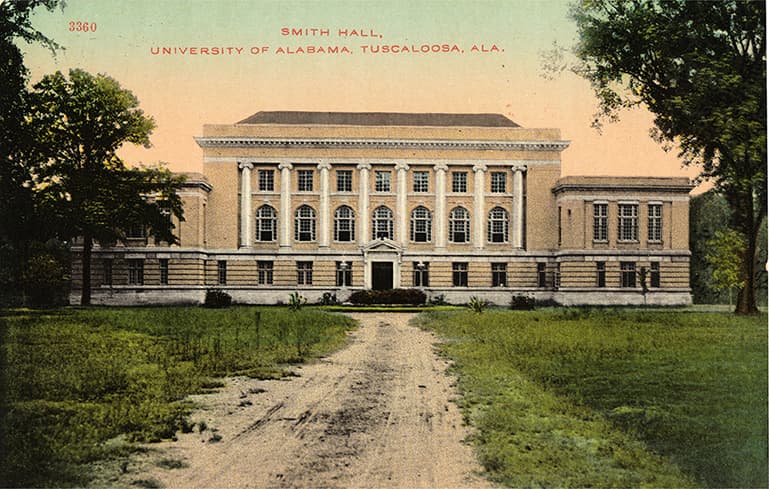 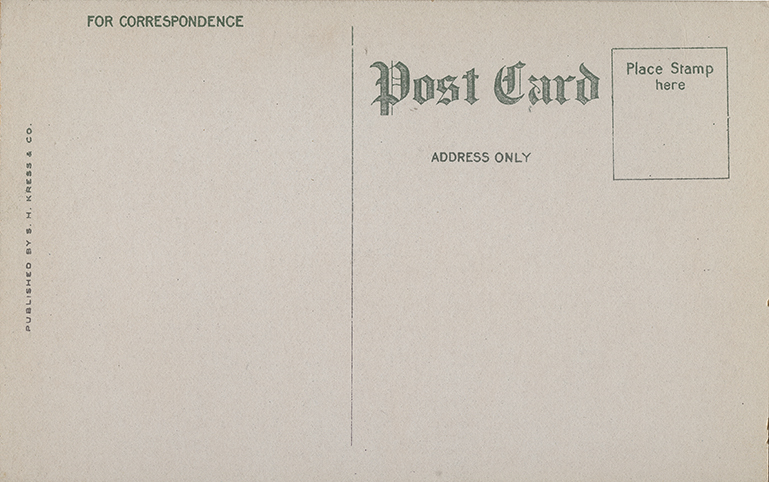 Centreville, the seat of Bibb County, was established on the west bank of the Cahaba River by Sarah F. Chotard. She received a land grant from the federal government in 1823 for services provided by her husband. The location was known as Falls of the Cahaba and Centerville before the current spelling came into common use. This courthouse, built in 1902, has undergone extensive renovation and preservation. The Leonard Callaway Pratt Chapter of the United Daughters of the Confederacy dedicated the Confederate monument in 1910. 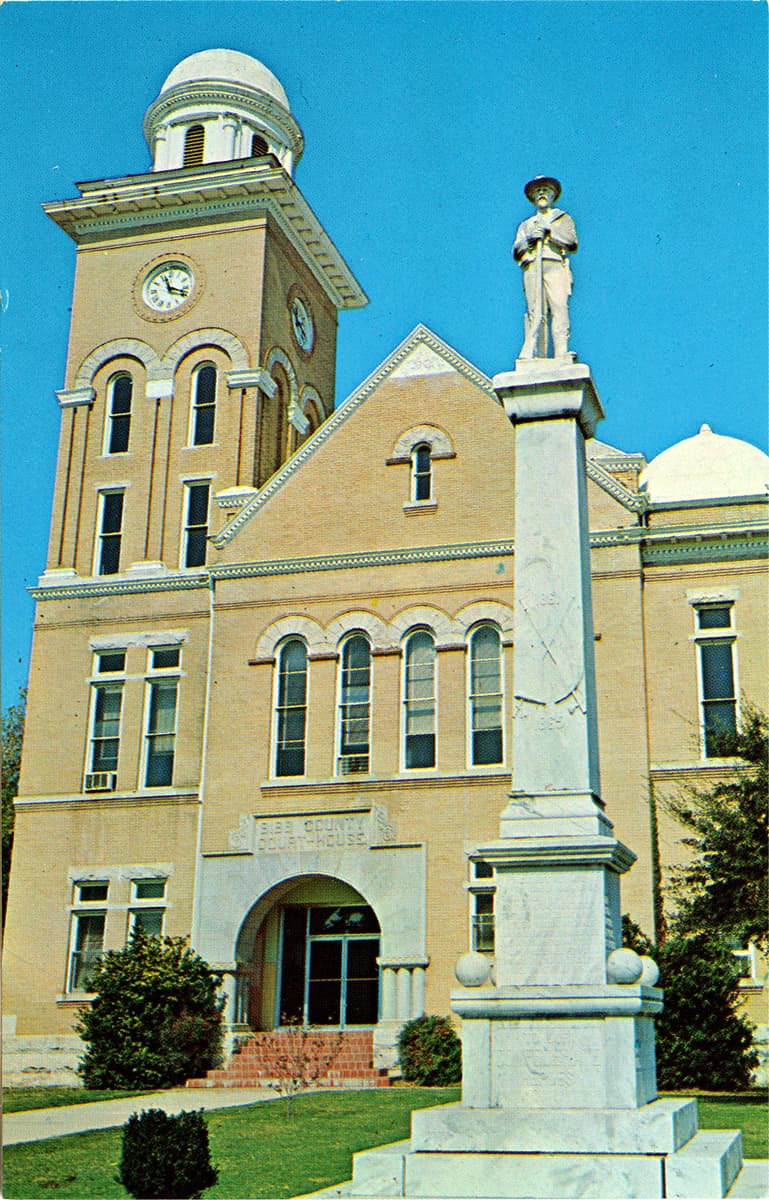 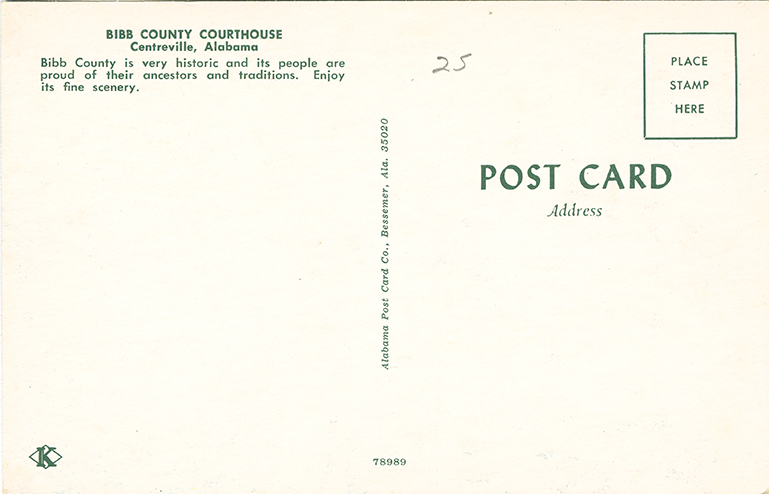