Livingston, named for statesman and jurist Edward Livingston and incorporated in 1835, is the seat of Sumter County. The Livingston Female Academy was chartered in 1835 and from 1881 to 1910, was led by noted educator and reformer Julia Tutwiler. The institution began accepting male students soon after 1900, but the student body was predominantly female through the 1950s. The facility had several name changes: State Teachers College in 1929, Livingston State College in 1957, Livingston University in 1967, and, recognizing its regional mission, to the University of West Alabama in 1995. This is a colorized picture of the college in the 1930s. 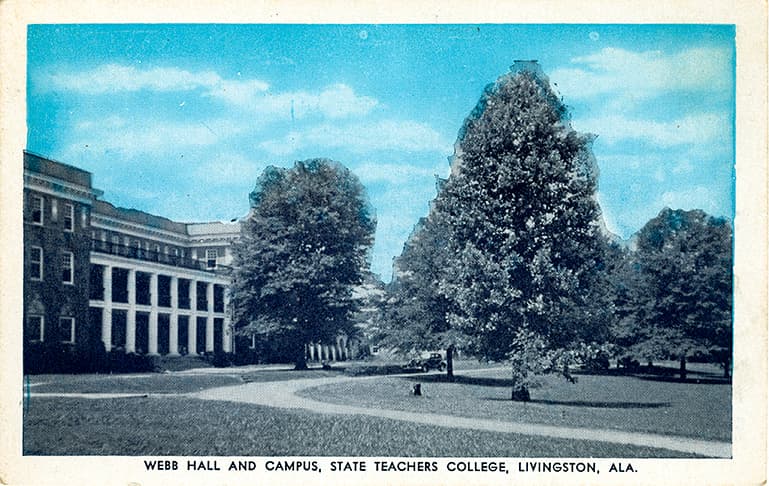 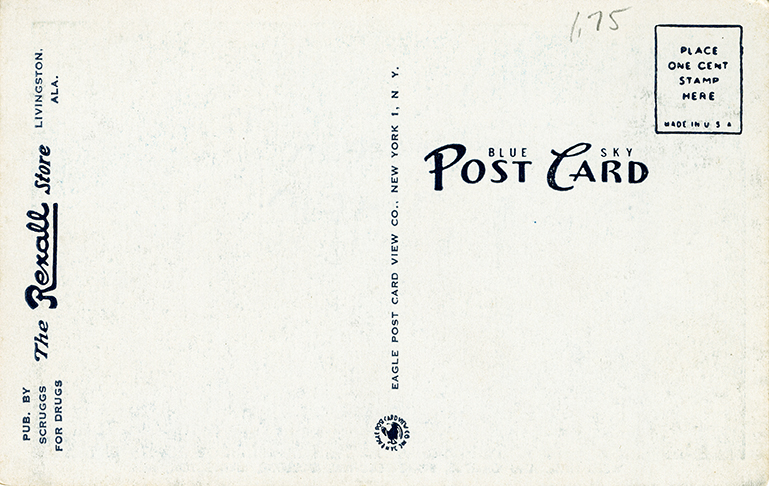 Chambers County was formed adjacent to the Georgia state line in 1832. Officials wanted the county seat near the center of the county so they laid out the new town of Chambersville. Lots were auctioned in October 1833 to finance a courthouse and jail. By the time it was incorporated in 1835, Chambersville had changed its name to LaFayette in honor of the Marquis de LaFayette (1757-1834) who toured Alabama in 1825. This is a 1920s postcard view of the 1899 Chambers County courthouse 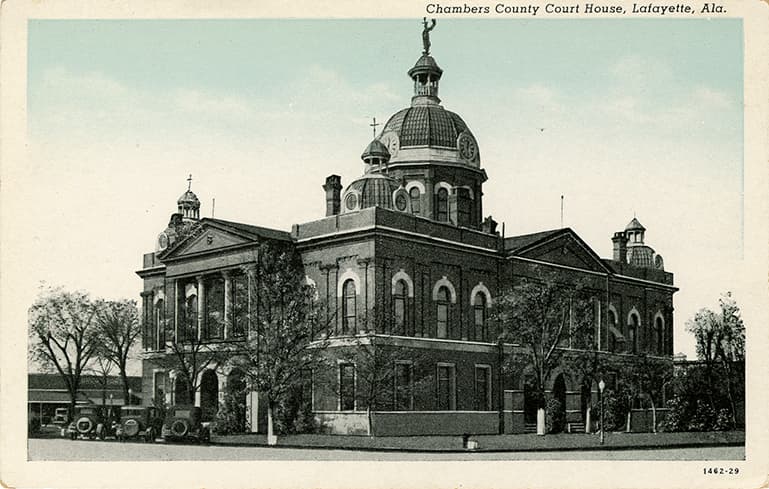 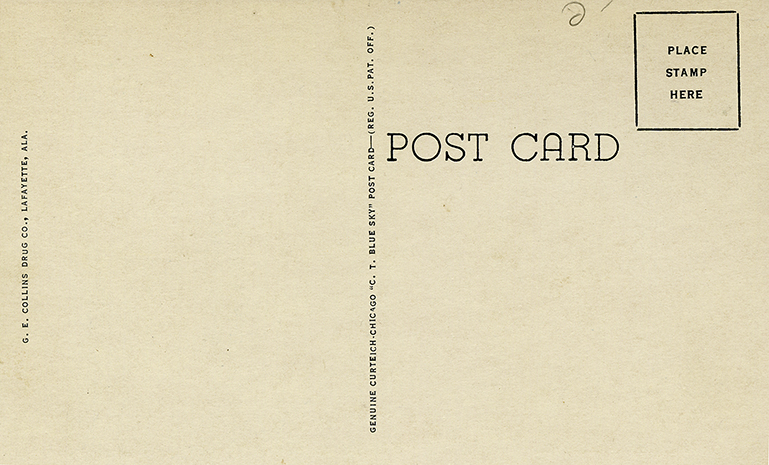 In 1835, James Young established a trading post in this area and the town of Youngsville was incorporated in 1872. It was renamed Alexander City in 1873 to honor Edward P. Alexander who brought the S & M Railway to town. Alexander City is now the largest city in Tallapoosa County. The First Baptist Church was organized in 1872 and built its first sanctuary at 64 Court Square in 1877. New sanctuaries were built on this site in 1906 and in 1967. This is the 1906 building. 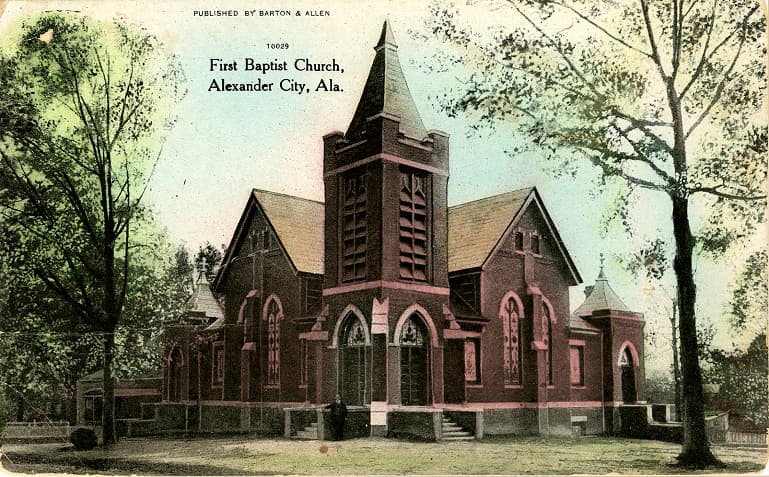 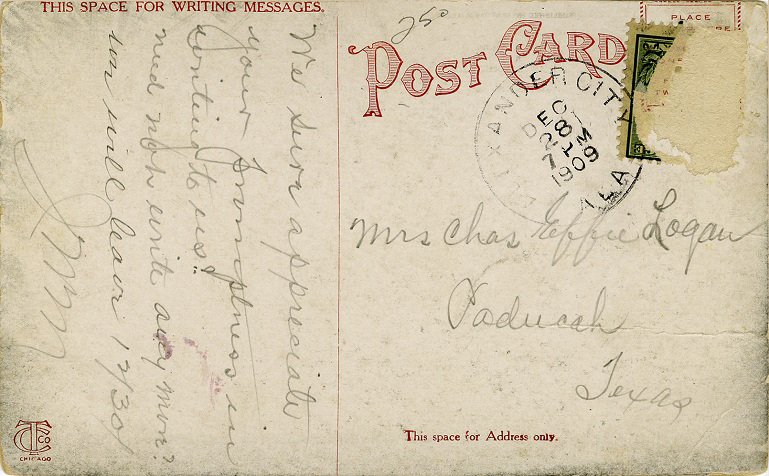 We sure appreciate your promptness in writing to us. need not write any more? we will leave 12/30 J M M Addressed to: Mrs Chas Effie Logan Paducah Texas

Established in 1817, Marion became the Perry County seat in 1909. It was first called Muckle Ridge but renamed to honor American Revolution war hero Francis Marion, the “Swamp Fox.” Marion is known as “College City” because Alabama State University, Samford University, Marion Military Institute (MMI), and Judson College all began there. MMI and Judson are still located in Marion. The Judson Female Institute (now Judson College) was founded in 1838. It is Alabama's only college specifically for women and is affiliated with the Southern Baptist Convention. This 1930s postcard shows the second Jewett Hall erected in 1889. The first was built in 1840 but burned in 1888. 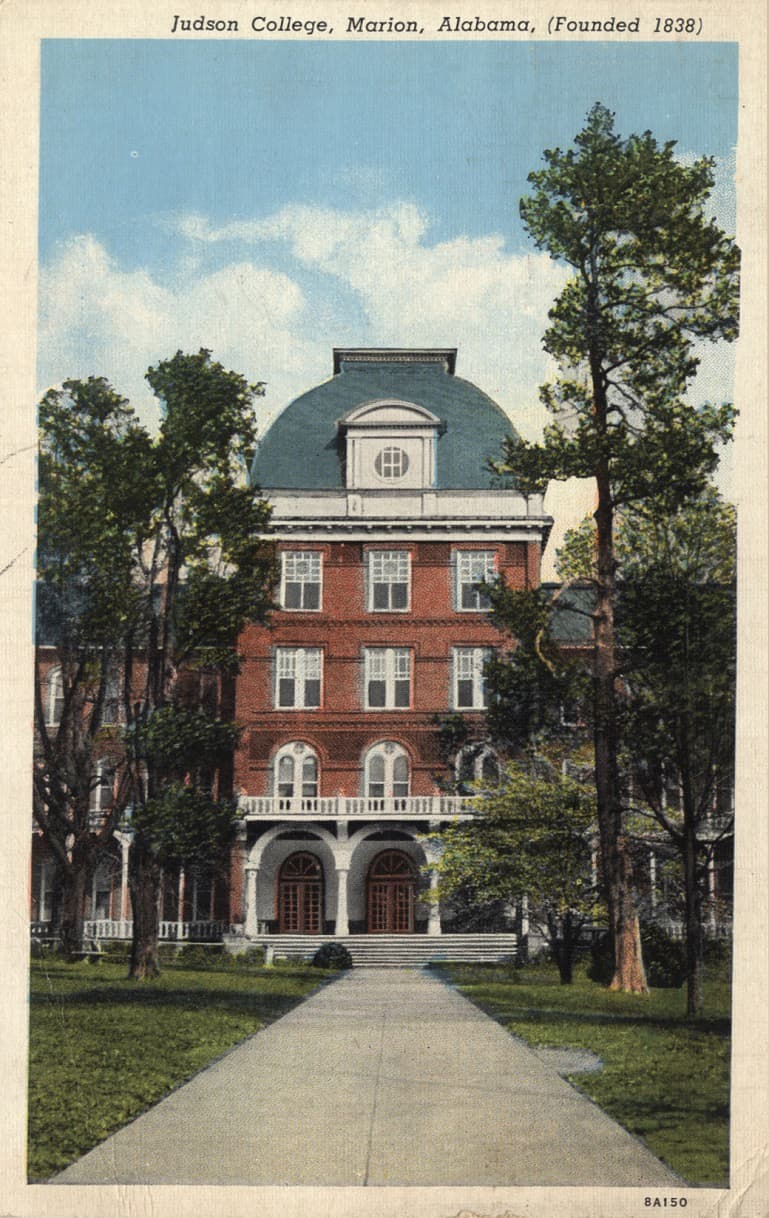 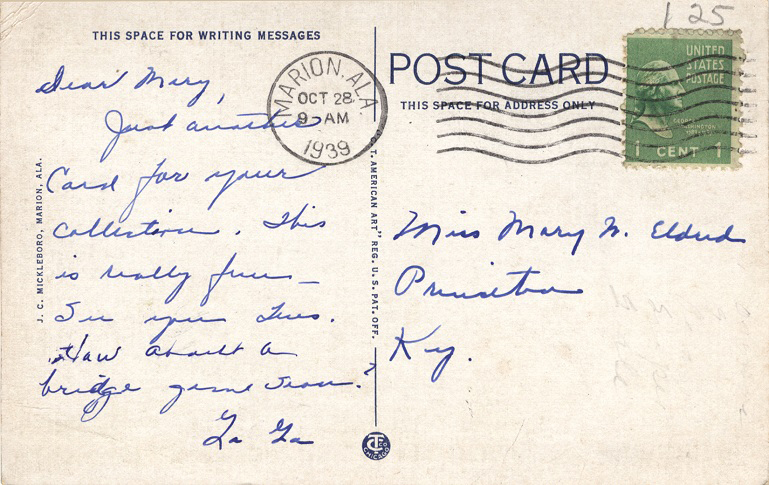 Dear Mary, Just another Card for your collection. This is really fun - See you Tues. How about a bridge game soon? Ga Ga Addressed to: Miss Mary N. Eldred Princeton Ky.

Located on a high bluff overlooking the Alabama River, Selma was incorporated in 1820 and is the seat of Dallas County. “Selma” means “high seat” or “throne” and came from the poem The Songs of Selma. William Rufus King planned and named the city. The First Presbyterian Church was organized in 1838. A year later, the church erected a wooden building at Dallas and Washington Streets, one of the four lots designated for churches in King’s 1819 city plan. The church moved to its present location at Dallas Avenue and Broad Street in 1847. In 1857, the city placed a clock in the church steeple for the convenience of the townspeople. The church dedicated its current building in 1894. It too contained a clock purchased by the city. 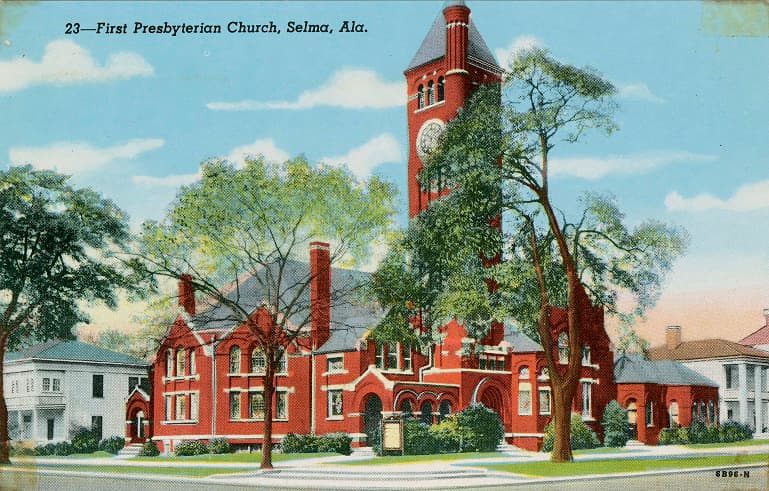 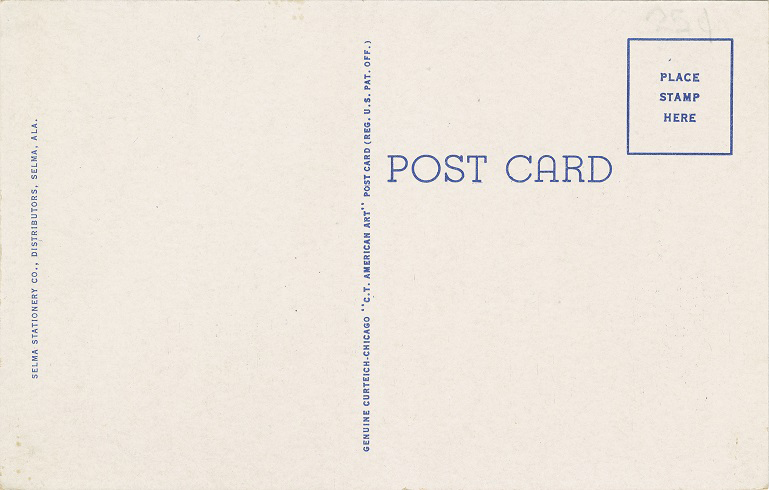 Auburn, in Lee County, was founded by John J. Harper in 1836. According to local lore, the name came from the first line of the poem “The Deserted Village,” which reads “Sweet Auburn, the loveliest village of the plain.” When East Alabama Male College opened in 1859, classes were held in a structure named “Old Main.” In 1887, Old Main burned and the following year, Samford Hall (then simply known as the “Main Building”) was constructed using some of Old Main’s salvaged bricks. In 1872, the Alabama Legislature designated Auburn as the state’s (white) land-grant college under provisions of the Morrill Act and changed its name to the Agricultural and Mechanical College of Alabama. In 1899, the name was changed to Alabama Polytechnic Institute and in 1960 to Auburn University. This is a postcard of Samford Hall in the 1890s. 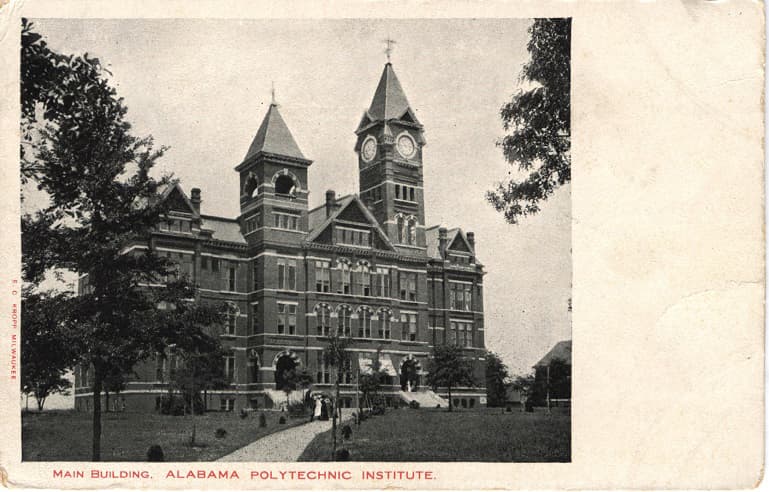 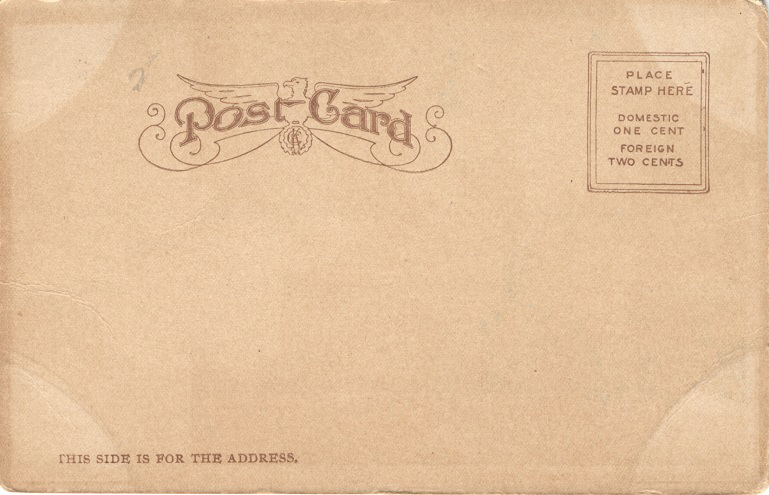 Incorporated in 1834, Wetumpka is the seat of Elmore County. The name comes from the Muskogean words “we-wau” (water) and “tum-cau” (rumbling). It is the site of an extraordinarily large crater formed by an ancient meteor. This is a colorized postcard of the Wetumpka State Penitentiary (originally known as the Alabama State Penitentiary) which was built in 1841. It was the first state prison in Alabama. In 1942, the Julia Tutwiler Prison was built and the old Wetumpka Prison property was sold. 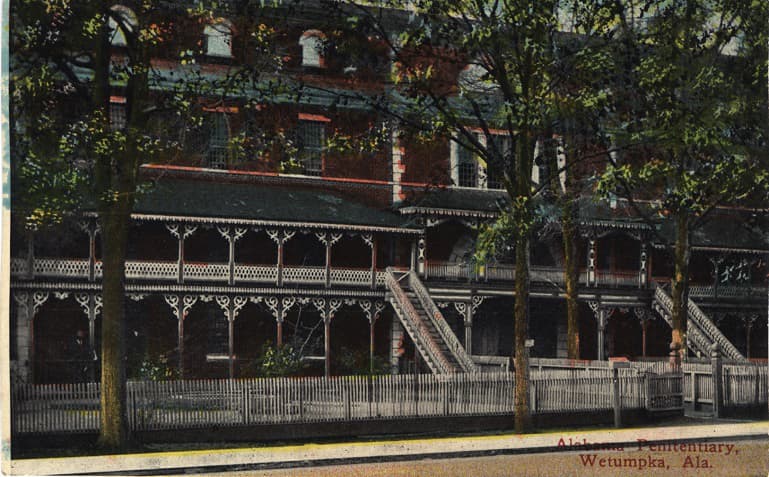 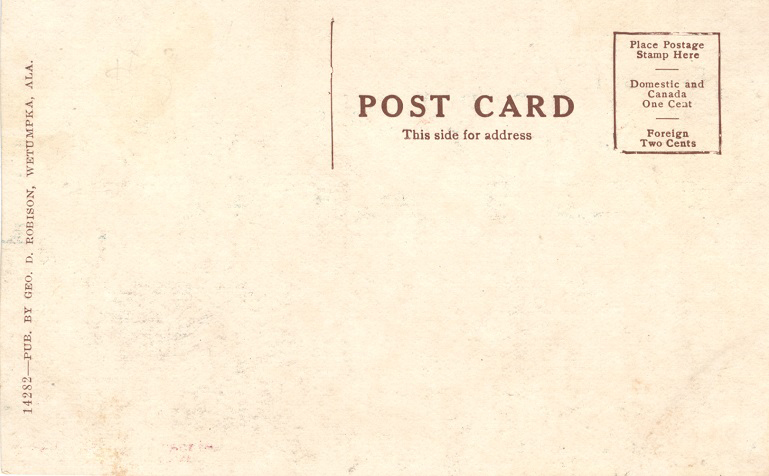 Tallassee is located on the Tallapoosa River in both Tallapoosa and Elmore counties. Its name is probably an adaptation of the name Talisi which was a Creek town located nearby. No definite date can be given for the founding of Tallassee, but the town was laid out and inhabited by 1835. The first Tallassee cotton mill was built in 1841. Confederate uniform cloth was made here, as well as, the duck cloth for tents, sails, and cots during World Wars I and II. The mills ceased operations in 2005. The plant in the foreground was destroyed by fire on May 5, 2016. This is a postcard of the mills in the early 1900s. 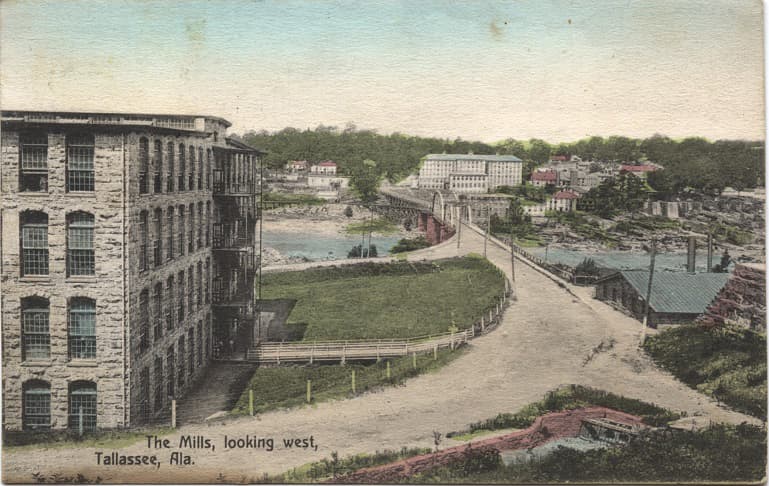 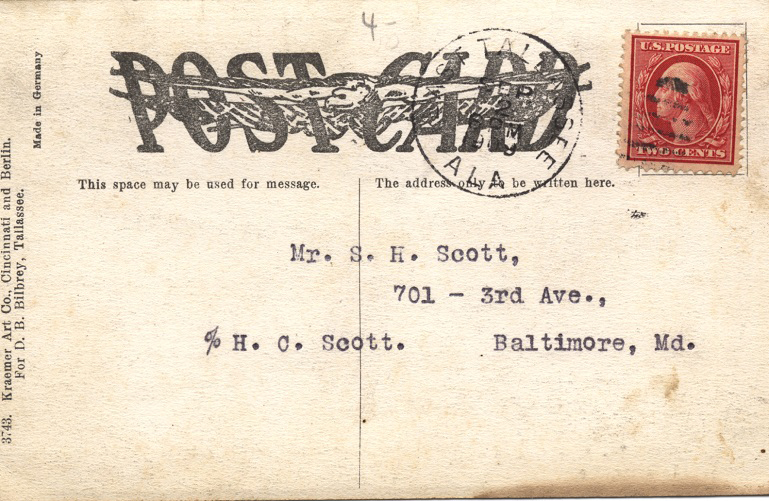