Historical Buildings of Southeast Alabama as displayed through the Traveling Exhibits

Troy was first settled in the early 1830s and was known as Deer Stand Hill, as well as Zebulon and Centreville. In 1838, two local residents gave land to Pike County to move the county seat from Monticello. The area was first called Troy in a deed dated October 9, 1838. Troy was incorporated in 1843. This postcard from 1909 shows the 1881 Pike County courthouse. The clock tower and second story balcony were added in 1898. The Confederate Memorial was dedicated in 1908. When the courthouse was demolished in 1954, the memorial was moved to the center of the square. 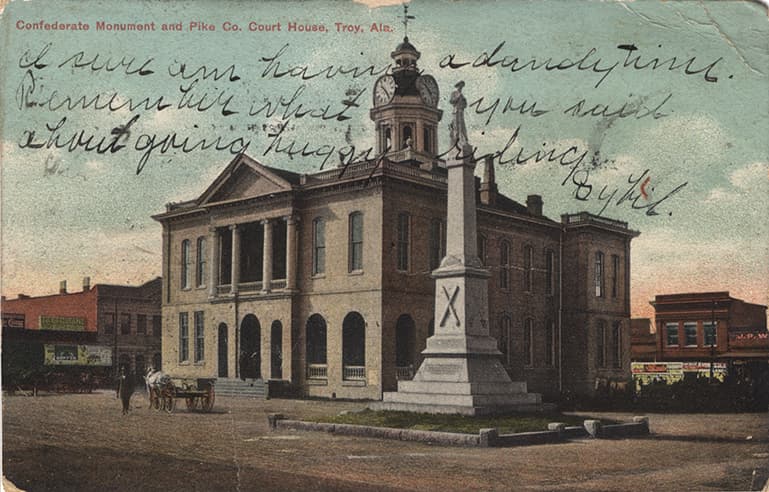 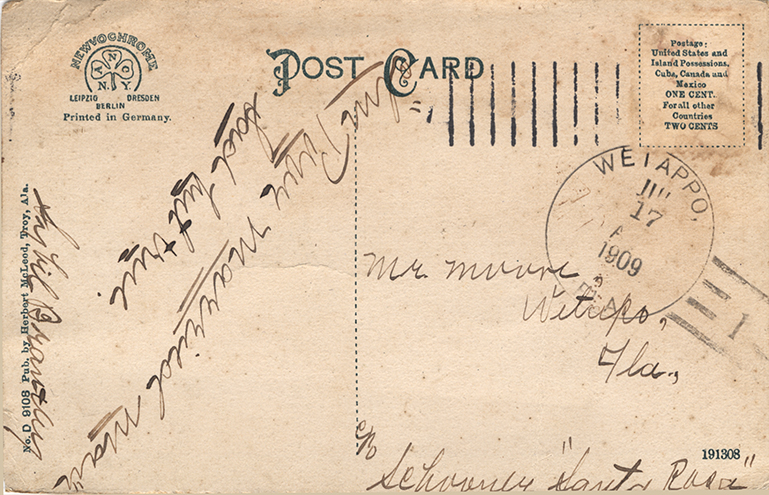 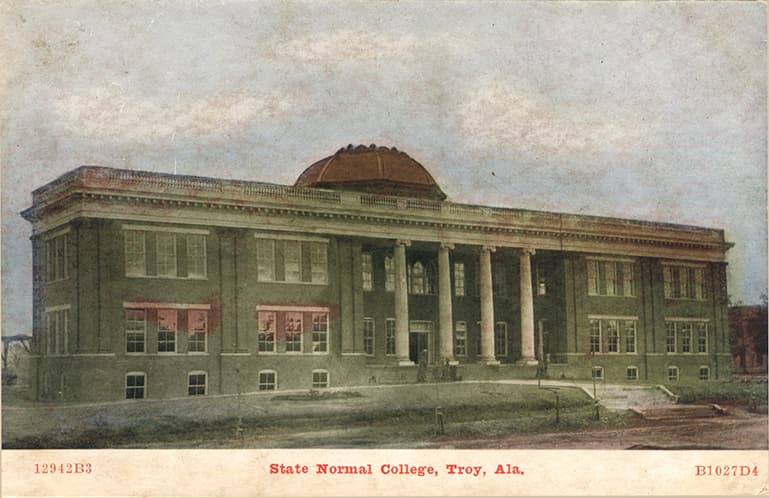 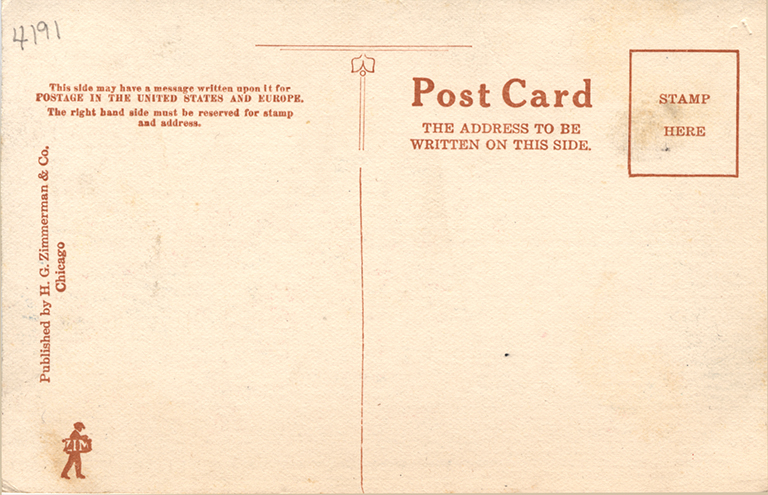 Camp Rucker, a 64,000-acre training base in Coffee and Dale counties, was officially opened on May 1, 1942. It was named in honor of Colonel Edmund W. Rucker, a Confederate officer. Camp Rucker was inactive from March 1946 until August 1950, when it was reopened to train replacement troops for combat in Korea. The post became inactive again from June to August 1954, but was reopened to house the Army Aviation School which moved from Fort Sill, Oklahoma. This is a colorized postcard of the camp headquarters in the 1940s. 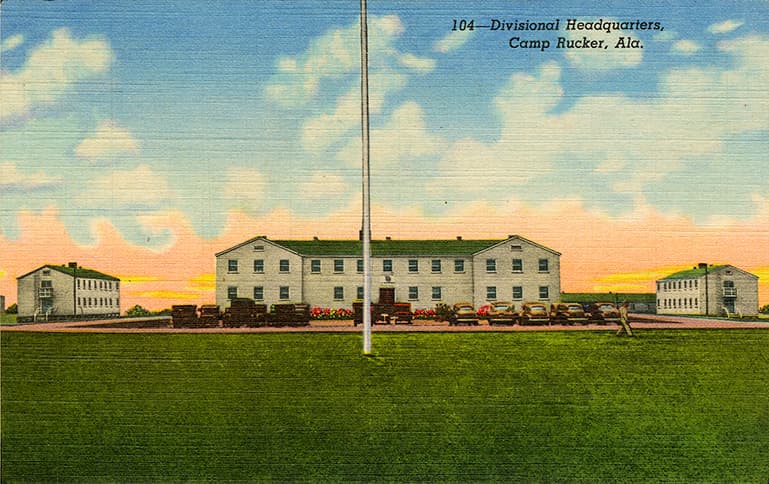 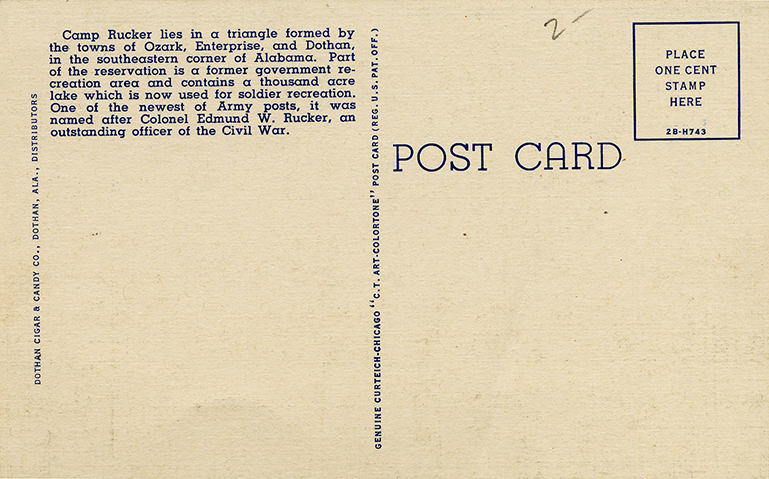 Dothan is the seat of Houston County. In the 1830s, Georgia lumbermen built a permanent settlement at Poplar Head Spring. In the late 1870s, Poplar Head applied for a post office but discovered the name was already taken. A local minister successfully suggested Dothan after a village mentioned in the Bible and the town was incorporated in 1885. The coming of the railroad transformed Dothan into the commercial center of Henry County. In 1903, the Alabama legislature created Houston County as Alabama’s 67th and most recent county. This courthouse was built in 1905 and demolished in 1962. 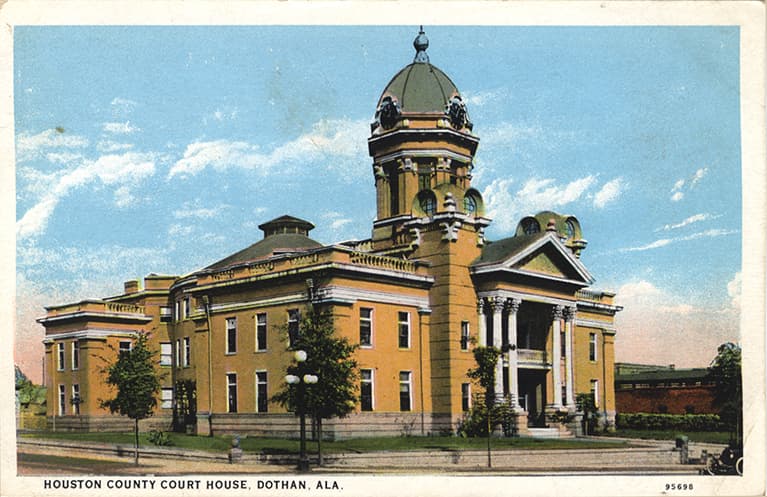 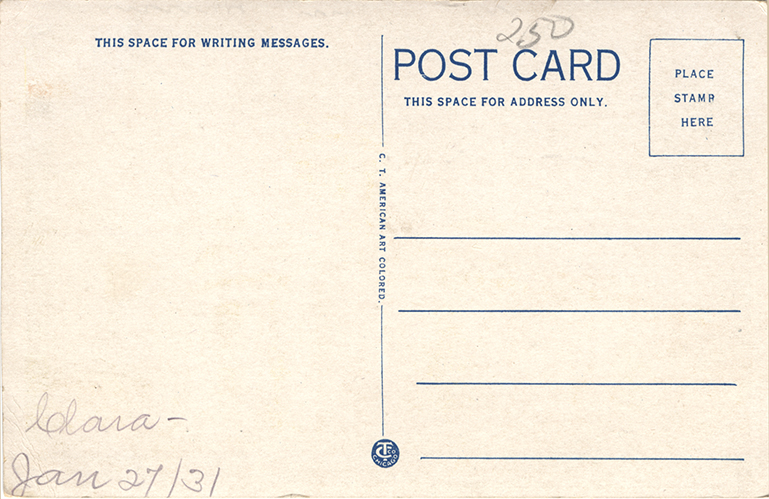 The first white settlers arrived in the Union Springs area in the 1830s. They named the town for the 27 springs flowing from the nearby Chunnenuggee Ridge. Union Springs was incorporated in 1844 as part of Macon County. When Bullock County was created in 1866, voters chose Union Springs as the county seat. A Methodist congregation built the First Methodist Church on Powell Street in 1861. The present Gothic Revival building was built in 1904 and showcases the finest example of German art glass windows in the South. 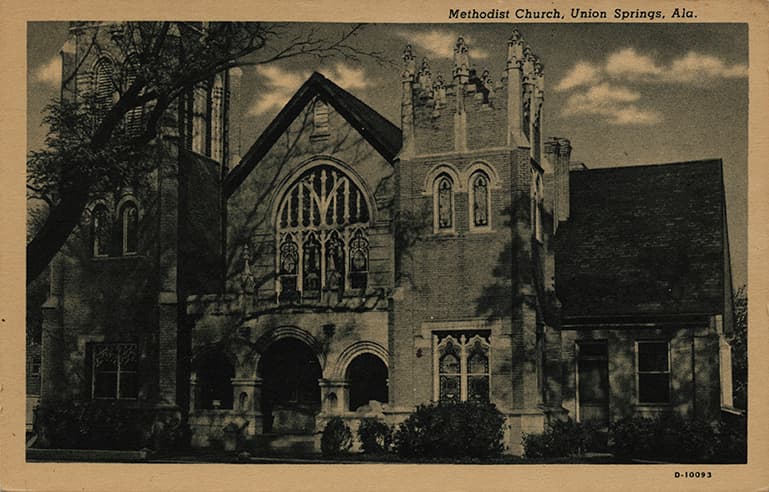 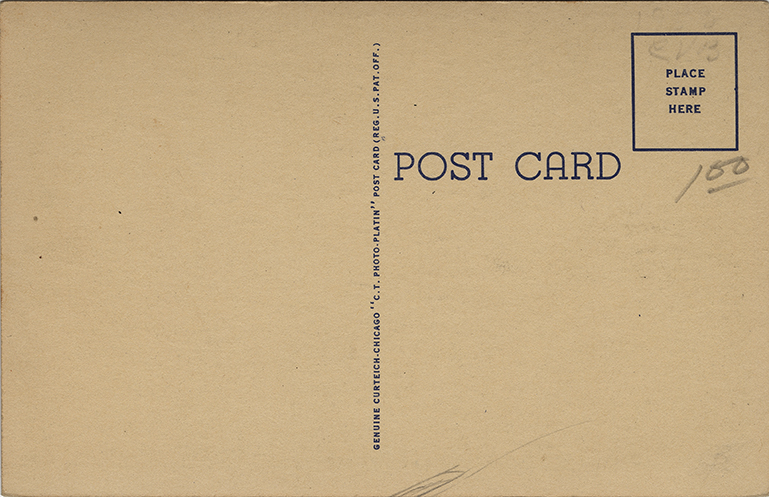 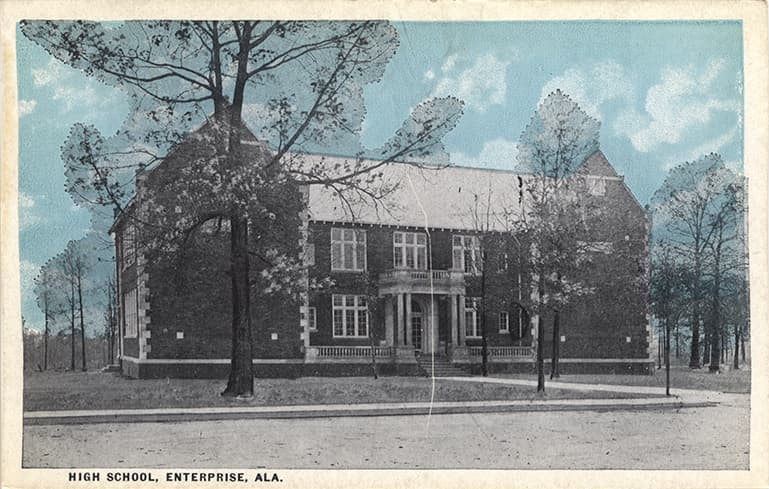 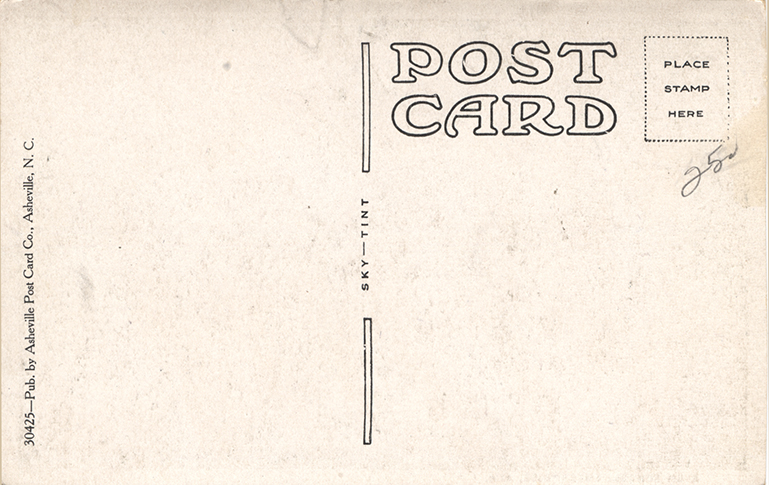 Tuskegee was named after a Creek leader, Taskigi, and is the seat of Macon County. It was founded in 1833 and incorporated in 1843. Tuskegee Normal School for Colored Teachers was founded on July 4, 1881, in a one room shanty with Dr. Booker T. Washington the first teacher and thirty adults representing the first class. George Washington Carver became the chair of the agriculture department in 1896. This is a postcard of Milbank Hall soon after it was completed in 1909. It was home to George Washington Carver’s personal laboratory and the Agricultural Department’s classrooms. Tuskegee Institute attained University status in 1985. 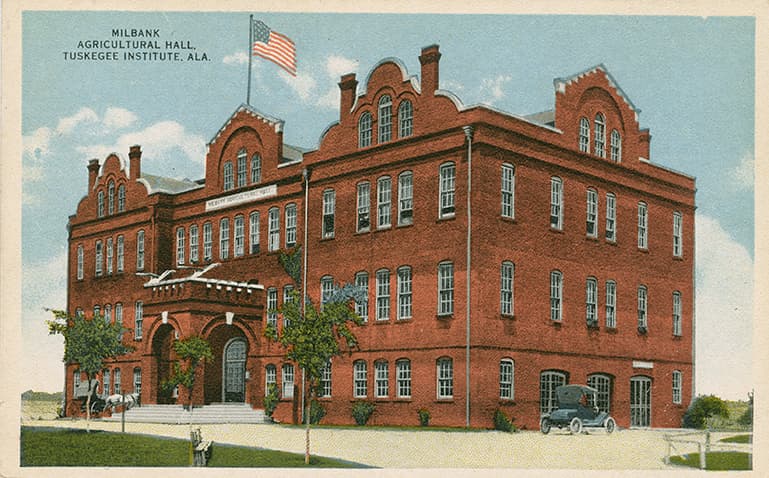 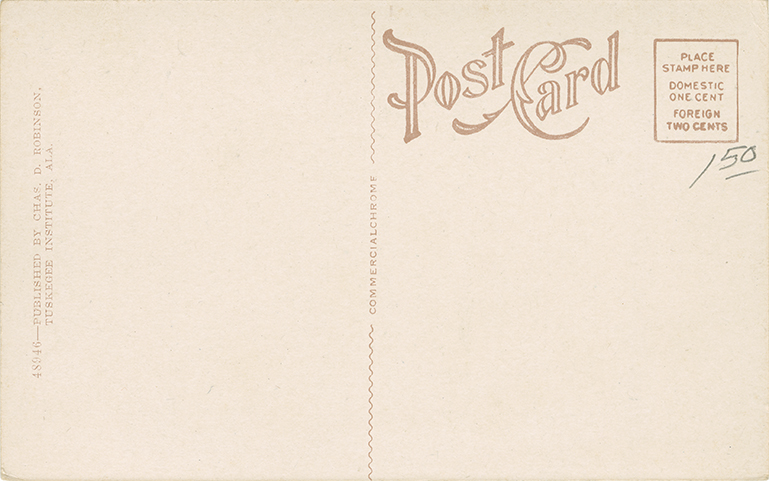 Greenville is the seat of Butler County. The town was originally named Buttsville to honor Capt. Samuel Butts who was killed in the Creek War of 1813-14. The settlers successfully petitioned the state to rename the town Greenville in 1822. This postcard shows the First Presbyterian Church in Greenville, built in 1886. The church originated in 1820 as the Hopewell Presbyterian Church. Although the sanctuary was remodeled in 1969-70, it retained the original pine wainscoting, stained glass windows, and pews. 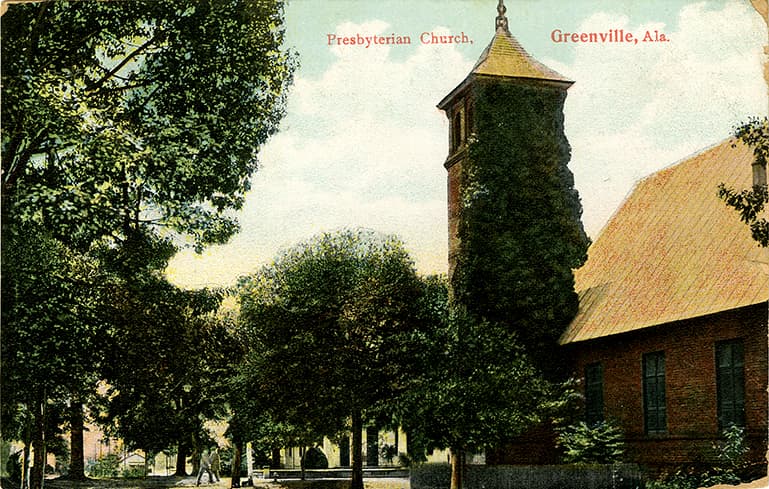 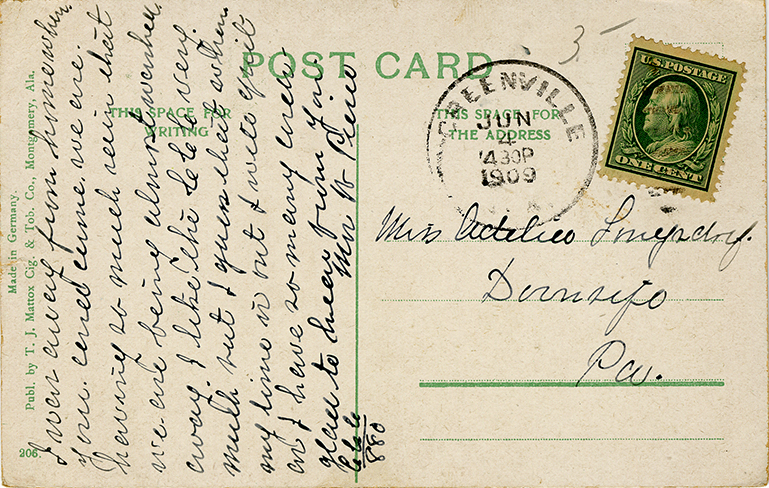 I was away from home when you [illegible] came. We are having so much rain that we are being almost washed away. I like the le le le very much but I guess that when my time is out I will quit as I have so many cards. glad to hear from you. Wm W Pierce le le le/880 Addressed to: Miss [illegible] Dornsife Pa.