Historical Buildings of Southwest Alabama as displayed through the Traveling Exhibits

Founded by the French in 1702, Mobile is the oldest city in Alabama. Mobile was under the French, British, and Spanish governments until it finally became an American city in 1813. It was incorporated in 1814. In 1829, Bishop Michael Portier planned a cathedral befitting the name. Designed by architect Claude Beroujon, the cornerstone was laid in 1835. After fifteen hectic years, the Cathedral of the Immaculate Conception was consecrated on Sunday, December 8, 1850. This is a postcard of the Cathedral in the early 1900s. 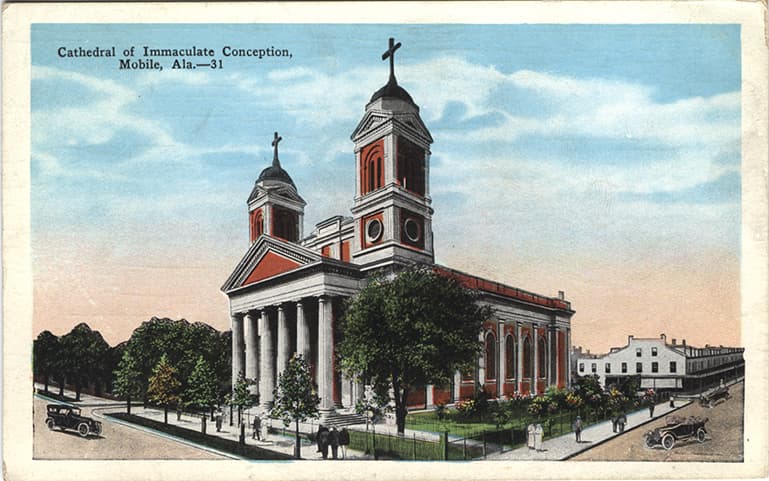 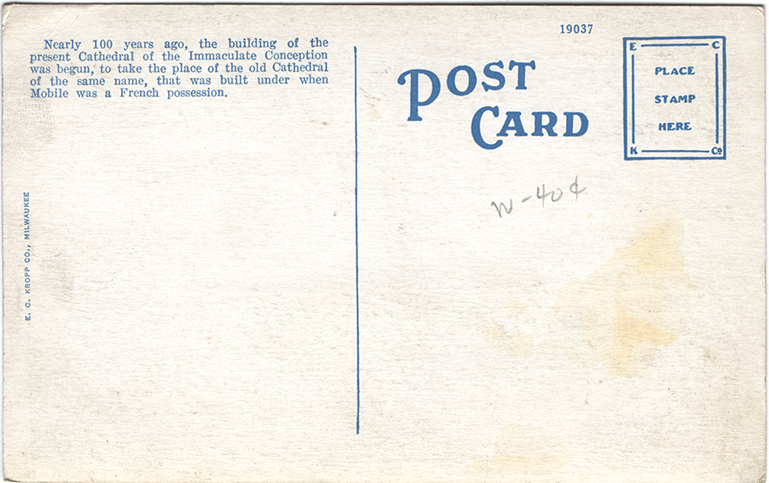 This is a postcard of the first Mobile Public Library which was established in this antebellum structure at the corner of Conti and Hamilton Street in 1902. In the late 1910s, the library association asked the city leaders to provide operating funds and offered to give the city property if it would build a new building. The city approved the funding but declined to build a new building. However, increased public demand finally got the library a new building. The structure, now known as the Ben May Main Library, was opened on September 15, 1928. 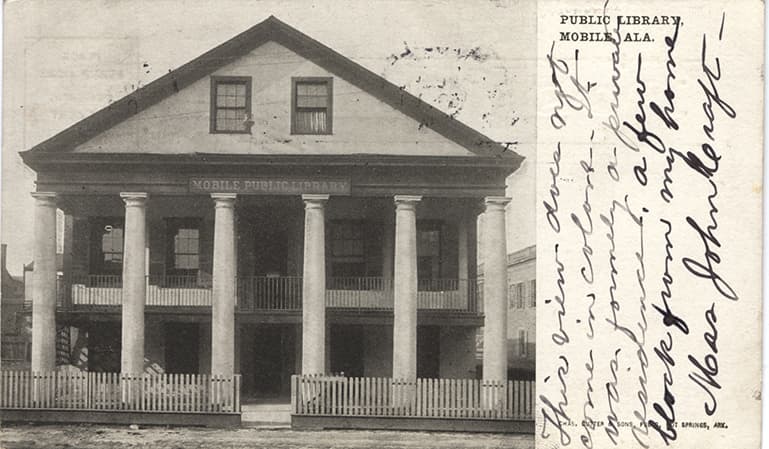 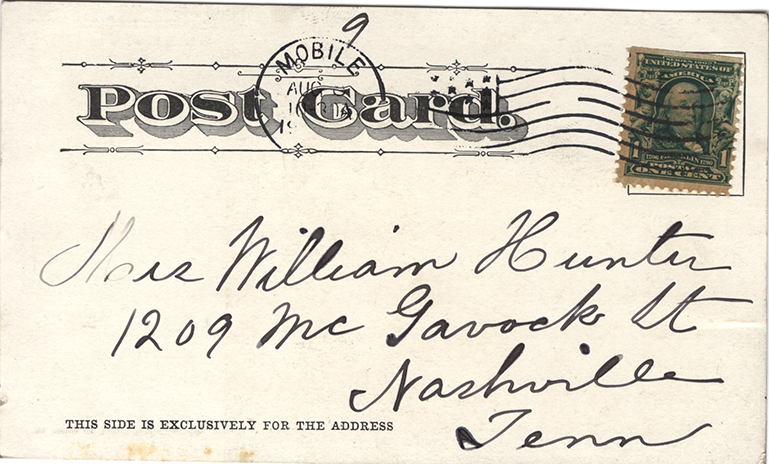 This view does not come in color. It was formerly a private residence. A few block from my home Mrs John Craft Addressed to: Mrs William Hunter 1209 McGavock St Nashville Tenn

Alabama's first and only seacoast light was constructed in 1837 on Sand Island. It stood 55 feet tall roughly three miles from the Mobile Bay entrance on 400 acres. Over the years, the island has eroded and it is now less than one acre. This postcard, postmarked June 12, 1911, shows the 132 foot brick tower that was completed in 1873. The lighthouse is no longer in service and its Fresnel lens is located in the Ft. Morgan Museum. 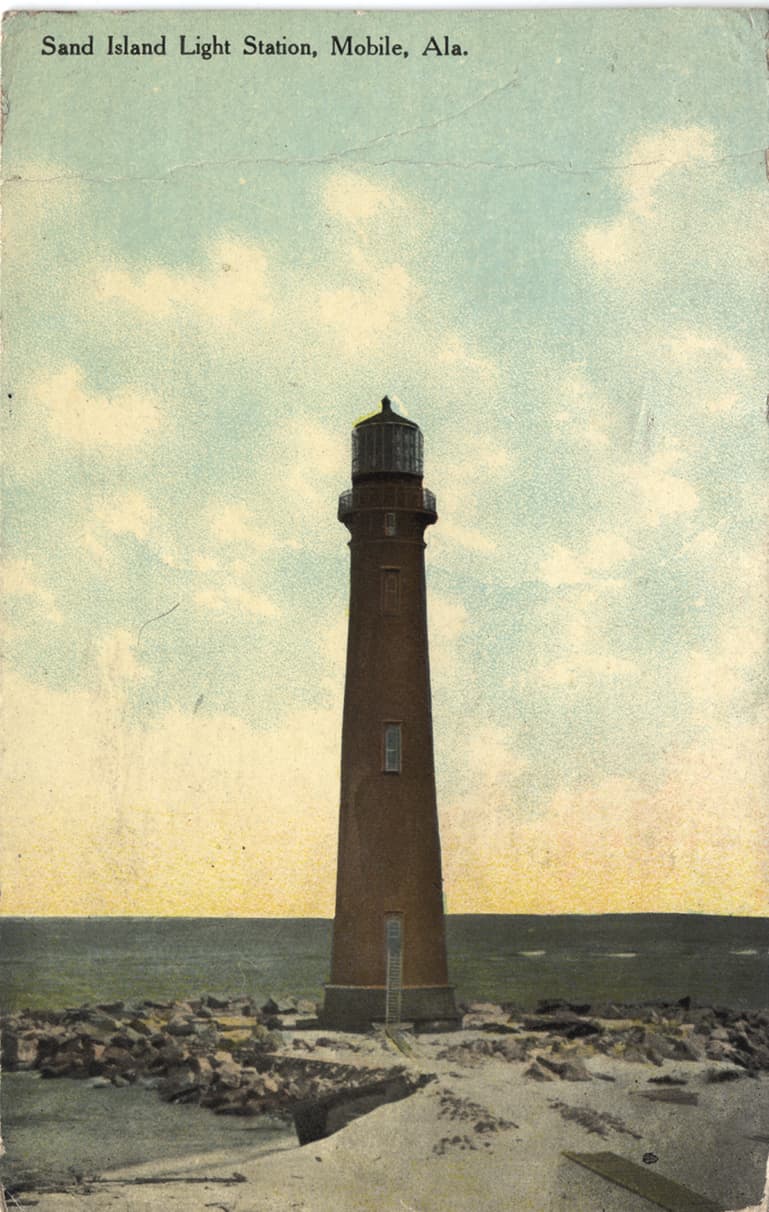 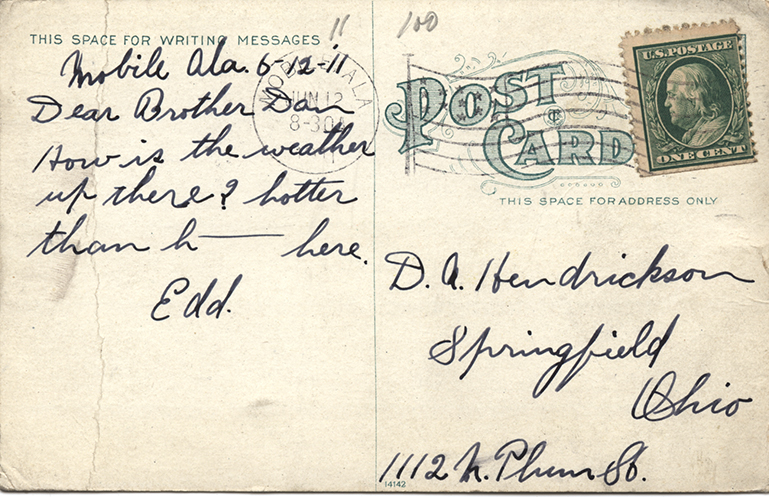 Settlement in Bay Minette began in 1861 when the railroad reached the area. The Bay and eponymous town were named for a French surveyor named Minette. Incorporated in 1907, Bay Minette is the county seat of Baldwin County but that was not an easy process. The State Legislature named Bay Minette the county seat in 1901, but Daphne refused to surrender the records. In October of that year, a group of men led by James D. Hand stole the county records in the middle of the night and delivered them to the new courthouse. Daphne sued but lost in the Alabama Supreme Court. Thus, Bay Minette became the county seat. 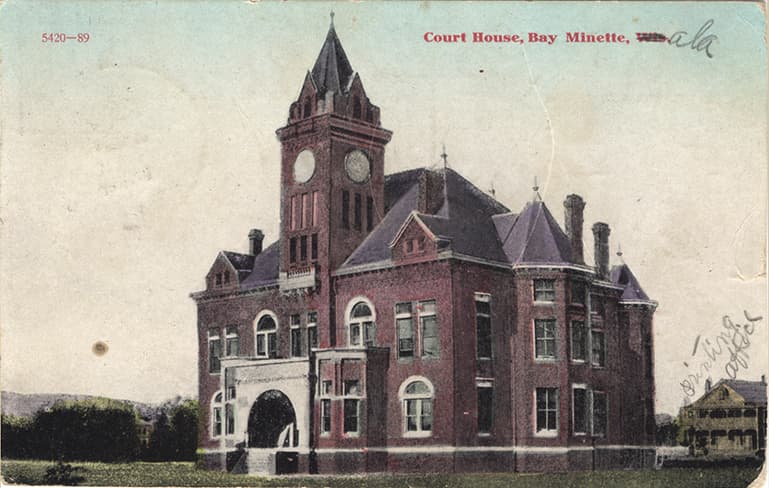 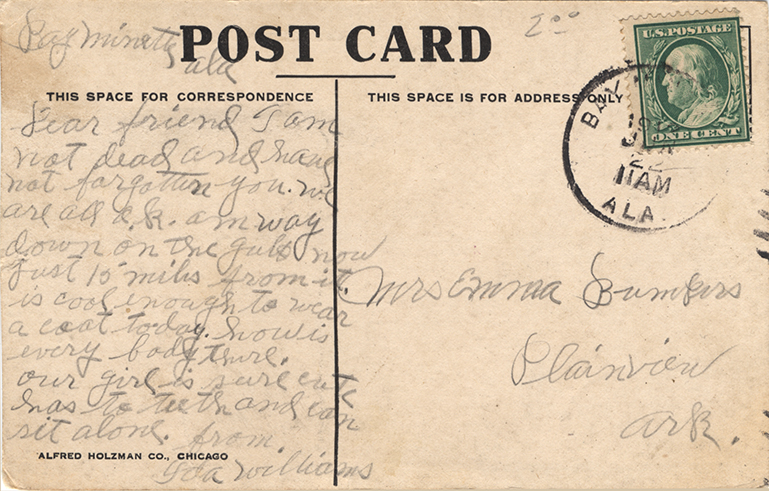 Bay Minette, ala Dear friend I am not dead and have not forgotten you. we are all o.k. am way down on the gulf now just 15 miles from it. is cool enough to wear a coat today. how is every body there. our girl is sure cute has two teeth and can sit alone. From Ida Williams Addressed to: Mrs Emma Bumpers Plainview Ark. Notations on front: crossed of Wis. and wrote "ala"; wrote "printing office" over a building.

Evergreen, “the Emerald City,” is the seat of Conecuh County. The town was founded in 1819 and incorporated in 1873. Reverend Alexander Travis, who was the first to call the town Evergreen for its lushgreen foliage, was a founder of the Evergreen Baptist Church in 1845. On November 7, 1895, fire destroyed every business and house located on the east side of the railroad. Five days later, fire destroyed every business and house on the west side. This building was completed in 1908. 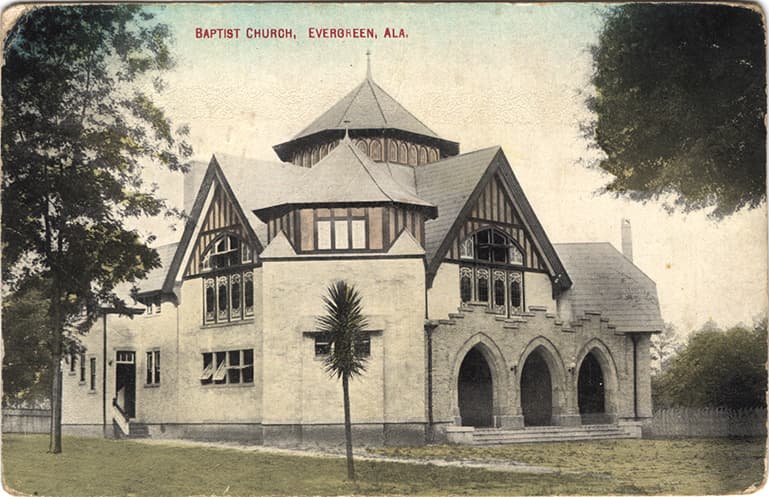 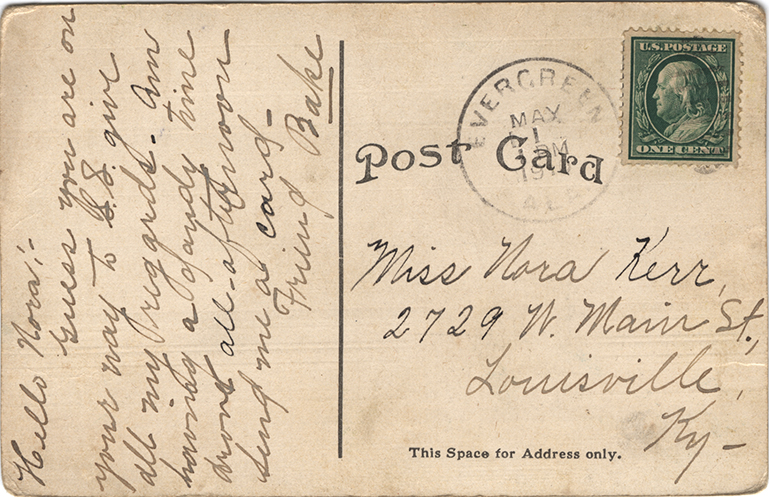 Hello Nora:- Guess you are on your way to S.S. give all my regards. Am having a dandy time drove all-afternoon Send me a card- Friend Bake Addressed to: Miss Nora Kerr, 2729 W. Main St., Louisville, Ky-

Foley is named for J.B. Foley, a Chicago businessman who moved to the area in 1901. He persuaded the railroad to run a spur from Bay Minette to the area and used his own money to lay the rails. The town was incorporated in 1915. Records indicate that Foley Schools started in a one-room building in 1908. In 1918, a two-story brick building was erected. This auditorium was built in the 1920s. 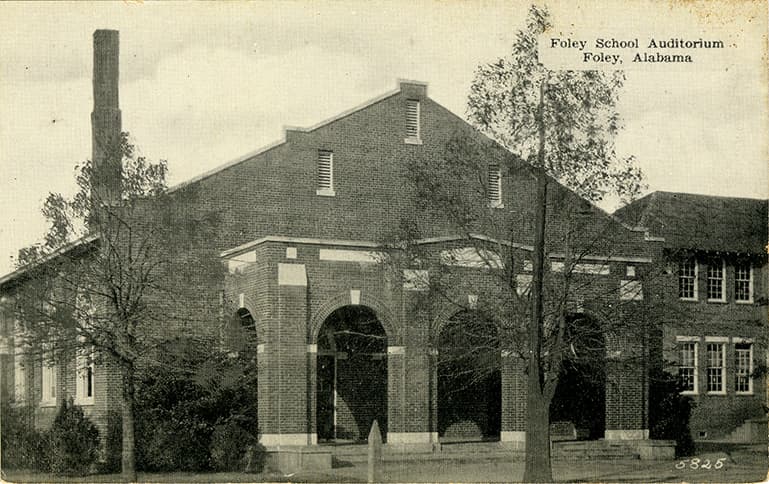 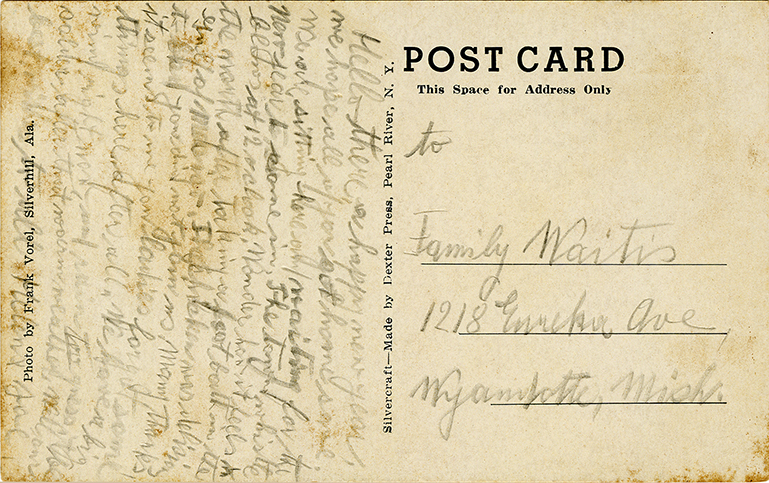 Hello there, a happy new year. we hope all of you got home save. we are sitting here and waiting for the new year to come in. The town whistle blows at 12 o clock. Wonder how it feels in the north after taking a foot bath in the Gulf of Mexico. The chicken was delisious to [illegible] not join us Many Thanks, it seems to me you forgot some things here after all. We love u big [illegible] right now, [illegible] too guess it [illegible] Addressed to: Family Waitis 1218 Eureka Ave, Wyandotte, Mich.

Point Clear is an unincorporated community in Baldwin County. In the 1800s, it was a popular destination for wealthy families from all over the country. Many tourists from New Orleans and Mobile spent their summers in Point Clear, for perceived health benefits. Most came by ferry boat which is why the homes and cottages face Mobile Bay. The historic Grand Hotel, built in 1847, is located in Point Clear. This Brodbeck-Zundel Brothers General Merchandise store was built in 1905 and served the citizens of Point Clear as the local store and post office. It burned in 1945 and was not rebuilt. 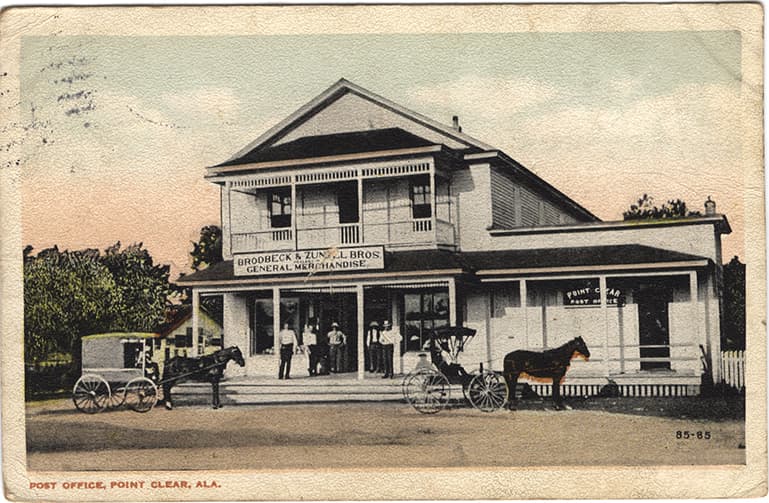 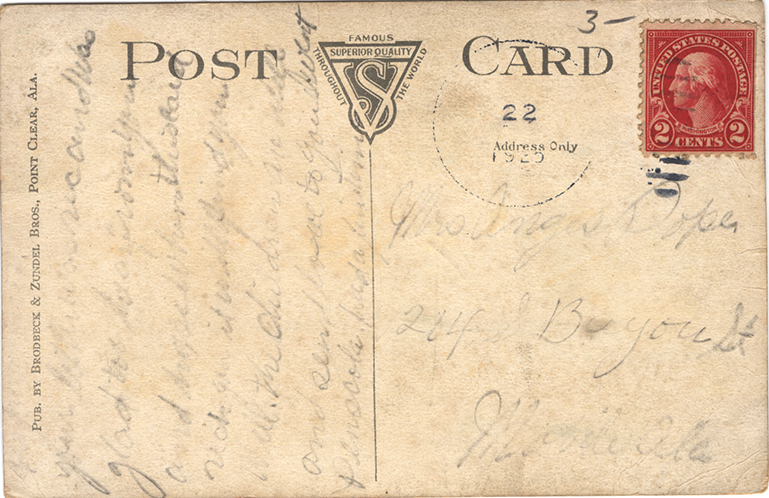 Around 1817, a sawmill was built near the Conecuh and Escambia rivers and the settlement of Newport began to grow around it. The town was incorporated in 1885 and the name was changed to Brewton to honor a prominent citizen. Brewton became the county seat of Escambia County in 1883 and this sanctuary was built the same year. At one time, the Brewton Alabama Universalist Church was one of the largest in the south. The church closed in the 1980s and the Cornerstone Community Church now occupies the building. 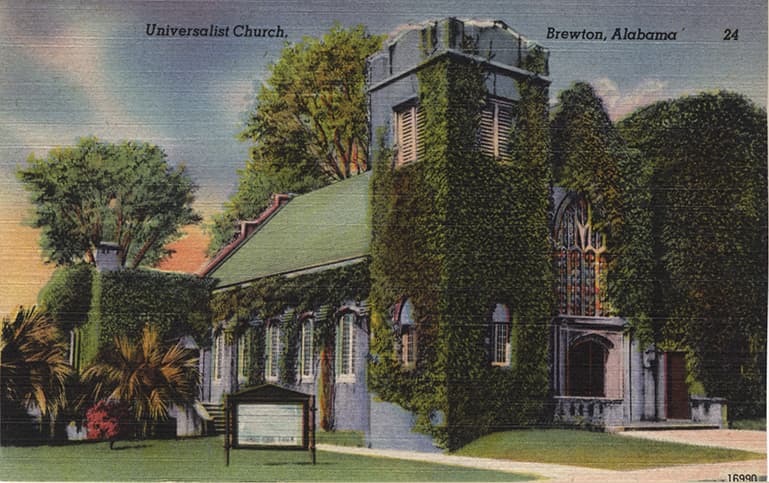 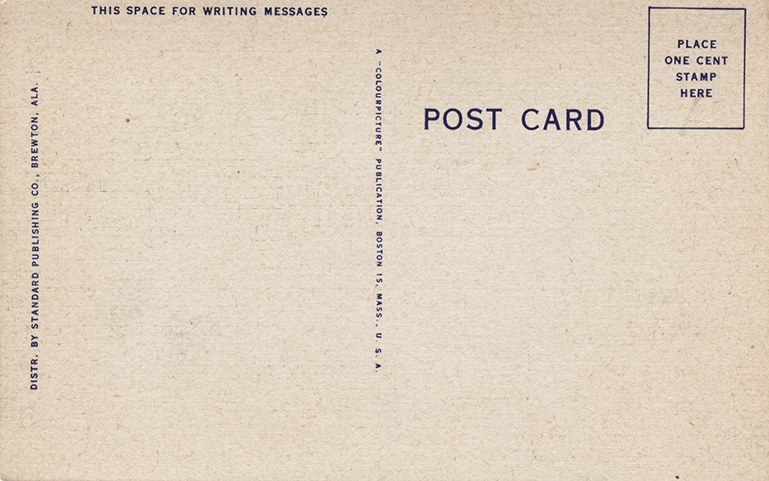