Greetings, Museums and Monuments from Tourism of Alabama Traveling Exhibits

Fort McClellan’s history begins with the Spanish-American War’s Camp Shipp in 1898. That is when the military discovered that this ridge of the Choccolocco foothills formed an excellent background for artillery firing. Camp McClellan, established near Anniston, Calhoun County on July 18, 1917, was a mobilization camp to quickly train men for WWI. The camp was redesignated Fort McClellan, a permanent post, on July 1, 1929, and it grew rapidly. In 1943, a 3,000 capacity Prison Internment Camp for prisoners of war was added. Since closing in 1999, a part of the former base now hosts private businesses and educational facilities. The Alabama National Guard uses another part as a training site. The last portion is the Mountain Longleaf National Wildlife Refuge. 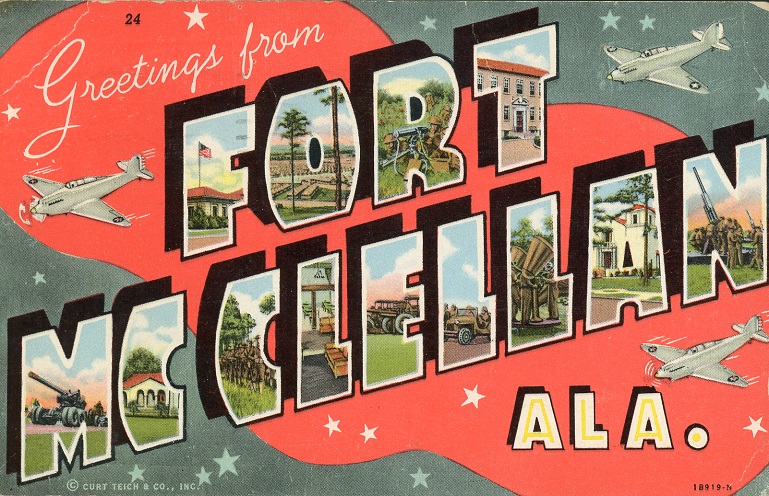 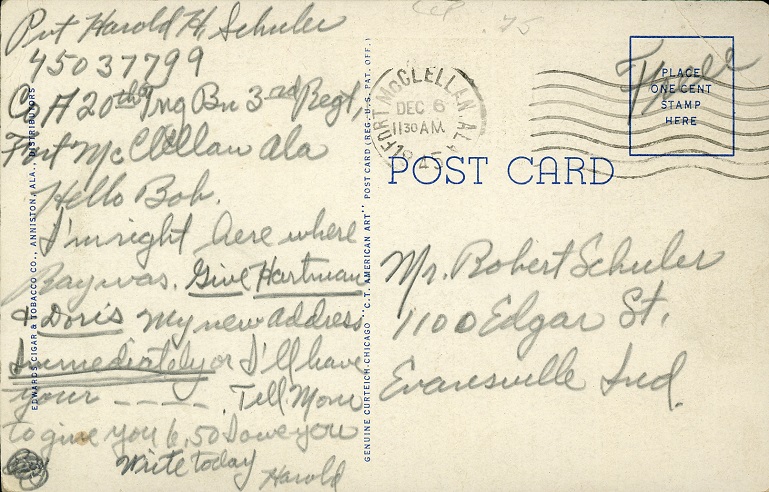 The Birmingham Civic Club commissioned Giuseppe Moretti to create a statue of Vulcan for the 1904 World's Fair to advertise Birmingham and promote Alabama's iron industry. Birmingham's association with Vulcan, the god of fire and metal, dates to the 1880s, when Alabama was the nation's fourth-highest producer of iron and steel. The 55-foot, 60-ton mighty Vulcan was cast from pig iron manufactured from ore mined at Red Mountain and is the largest iron figure ever cast. The statue resided at Fair Park until 1937 when the Works Progress Administration (WPA) moved it to its current location on Red Mountain overlooking the city. 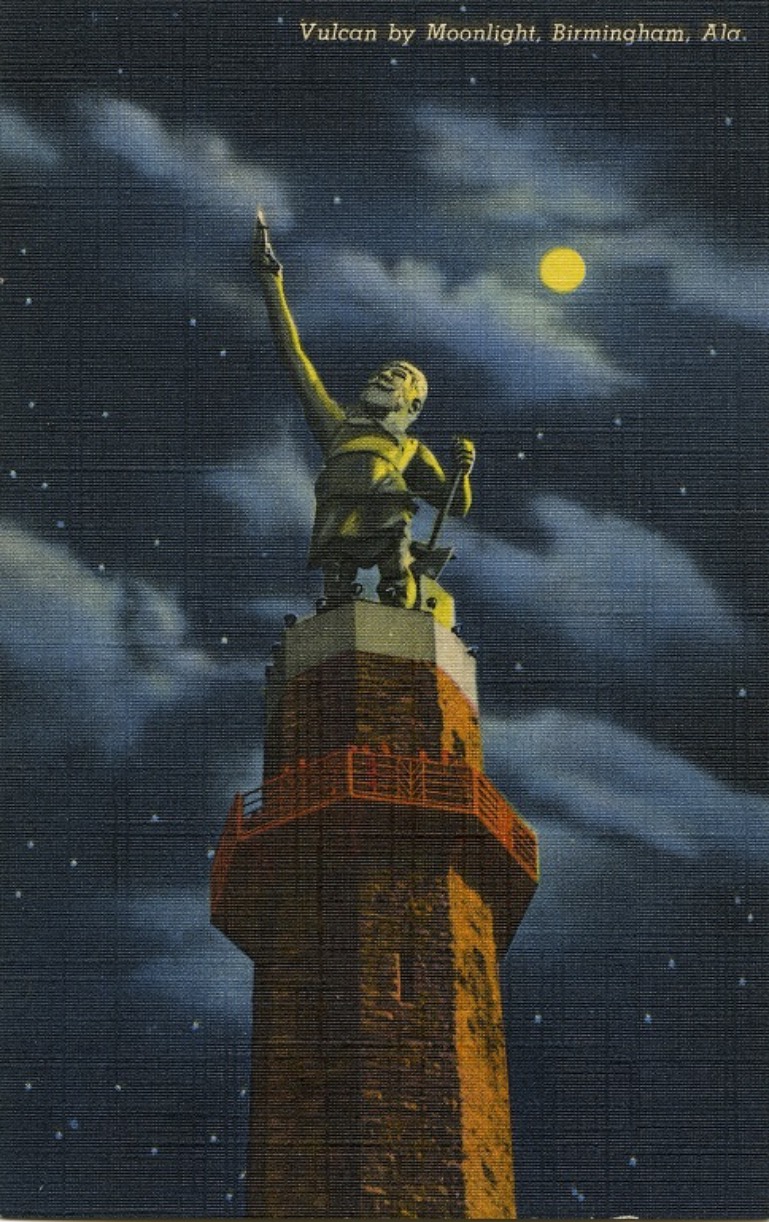 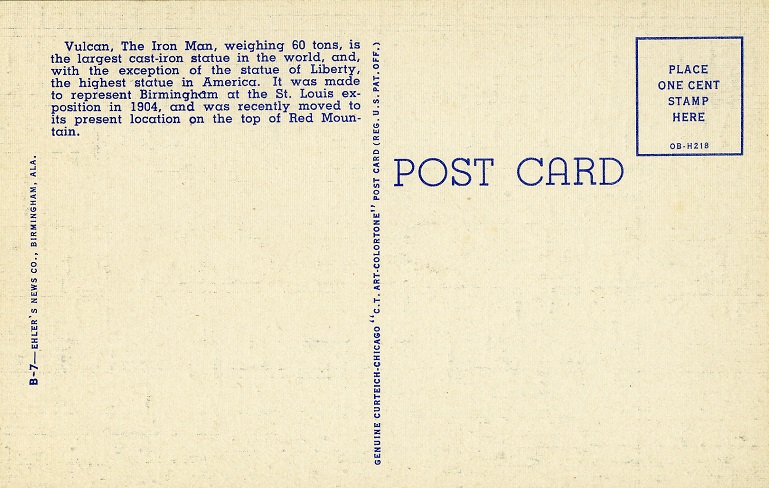 In 1941 the Huntsville Arsenal, housing the Redstone Ordinance Plant was established, and laid the foundation for the Rocket City nickname. In 1950, Congressman John J. Sparkman convinced the Army to name Redstone as the Army’s Ordinance Rocket Center, and later, to relocate Wernher von Braun and his team of rocket scientists to the facility. Defense contractors and NASA’s Marshall Space Flight Center located there, which caused Huntsville’s population to grow from about 16,000 to over 72,000 between 1950 and 1960. By 1970, it had doubled to 140,000. Now, the U.S. Space & Rocket Center serves as the Official Visitor Center for NASA Marshall Space Flight Center and is an affiliate of the Smithsonian Institution. 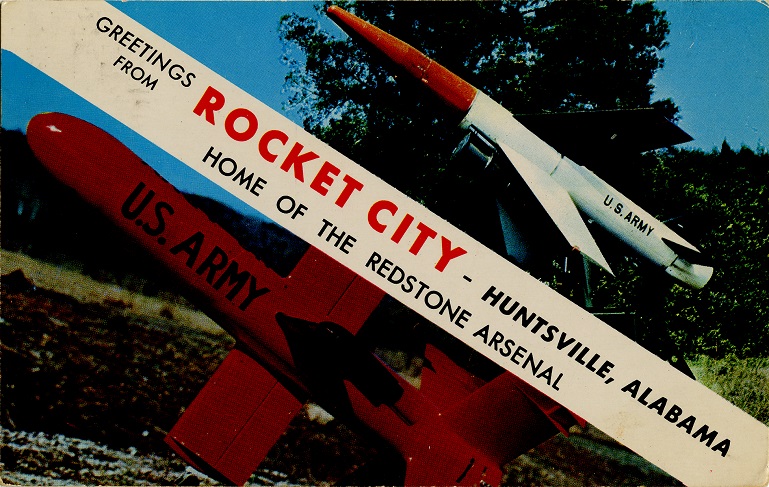 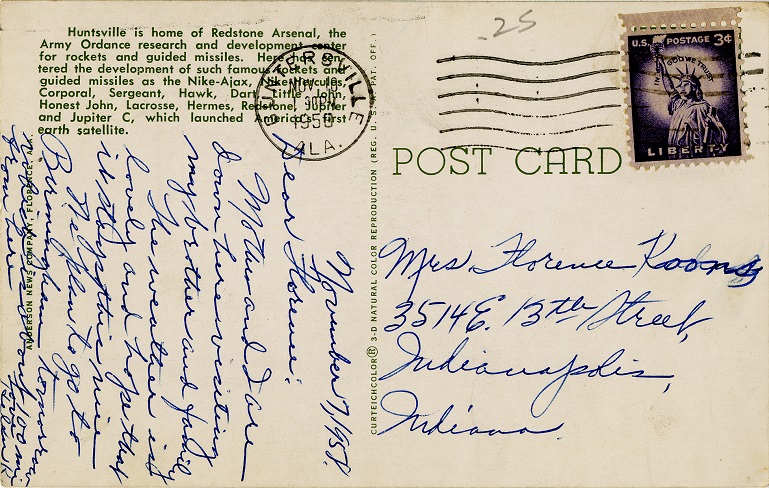 November 7, 1958. Dear Florene: Mother and I are down here visiting my brother and family The weather is lovely and hope that is stays this nice We plan to go to Birmingham tomorrow which is about 100 mi from here Love Helen R Addressed to: Mrs. Florene Koons 3514 E. 13th Street, Indianapolis, Indiana

Although the city of Magnolia Springs in Baldwin County dates back to an 1800 Spanish land grant, it was not incorporated until 2006. The area experienced appreciable growth in the late 1860s when families and descendants of Confederate and Union soldiers settled here. Around 1900, several Chicago chemical companies declared the water from the natural springs to be “the purest in the world.” The Magnolia River is central to this community. In the past, it was the “highway” connecting the residents with the outside world. Today, Magnolia Springs has the only postal river delivery system in the continental United States. 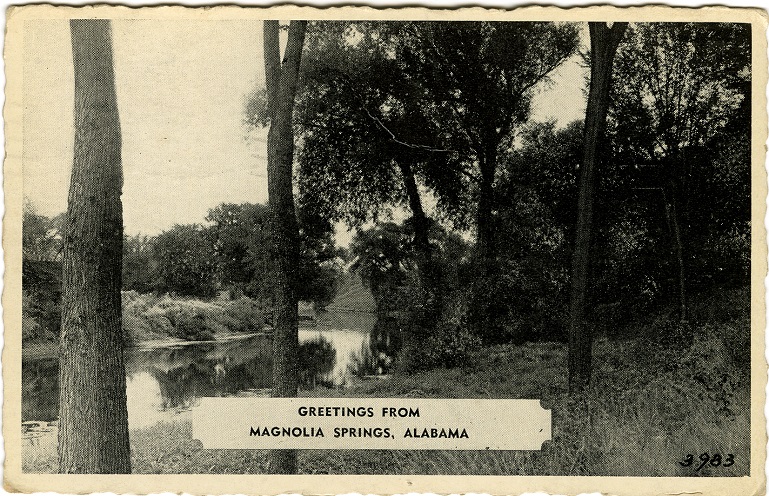 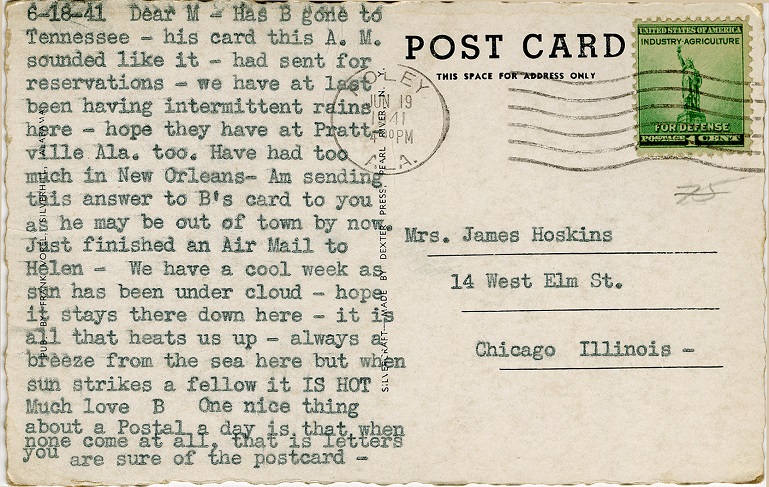 6-18-41 Dear M - Has B gone to Tennessee - his card this A. M. sounded like it - had sent for reservations - we have at last been having intermittent rains here - hope they have at Prattville, Ala. too. Have had too much in New Orleans- Am sending this answer to B's card to you as he may be out of town by now. Just finished an Air Mail to Helen - We have a cool week as sun has been under cloud - hope it stays there down here - it is all that heats us up - always a breeze from the sea here but when sun strikes a fellow it IS HOT Much love B One nice thing about a Postal a day is that when none come at all, that is letters you are sure of the postcard - Addressed to: Mrs. James Hoskins 14 West Elm St. Chicago Illinois -

In 1972, the Alabama Shakespeare Festival (ASF) began as a summer program in an old high school auditorium in Anniston. It was the vision of theater and Shakespeare enthusiast Martin L. Platt who recruited volunteer actors from Pittsburgh and New York, and a stage crew. With the help of a grant from the Alabama State Council on the Arts, he produced four plays. In 1977, Governor George Wallace proclaimed ASF to be “The State Theatre of Alabama,” and in 1985, it relocated to the Blount Cultural Park in Montgomery. Now, ASF is among the 10 largest Shakespeare festivals in the world and one of the most ambitious theatre institutions in the United States. 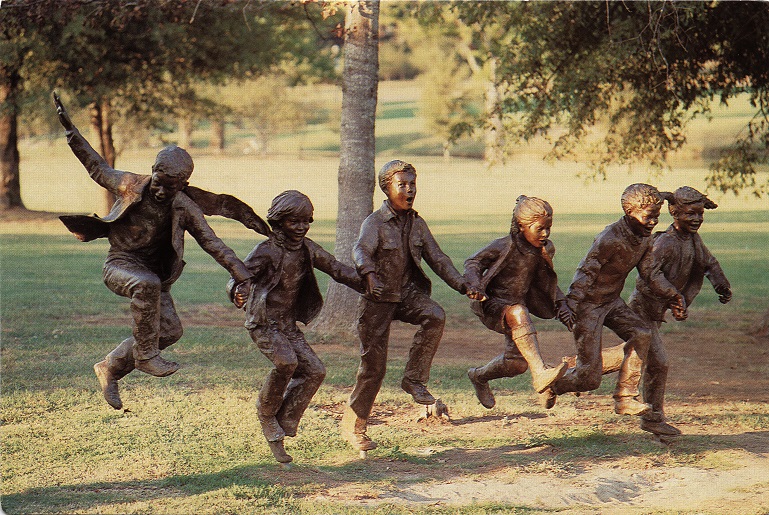 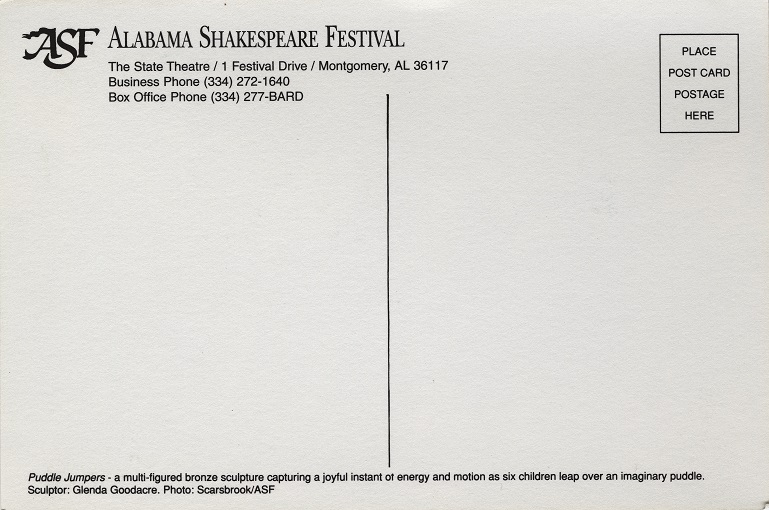 The Moundville Archaeological Park and Jones Archaeological Museum are south of Tuscaloosa in Hale County. The park, administered by the University of Alabama (UA) Museums, preserves 326 acres where the Mississippian people constructed 29 massive flat-topped earthen mounds, arranged carefully around a vast central plaza. National Geographic called this site “The Big Apple of the 14th Century.” In the early 1900s, Clarence B. Moore conducted excavations of the mounds and sent the artifacts to Philadelphia. This action alarmed the state and caused the 1915 passage of the antiquities law that was designed to protect archaeological sites. In the 1920s, state geologist Walter B. Jones led efforts to turn the site into a park, which concluded in Mound State Park being established in 1933. 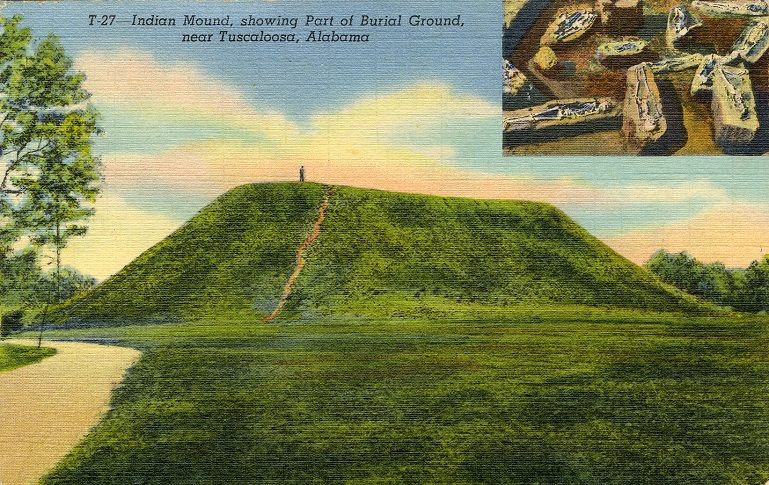 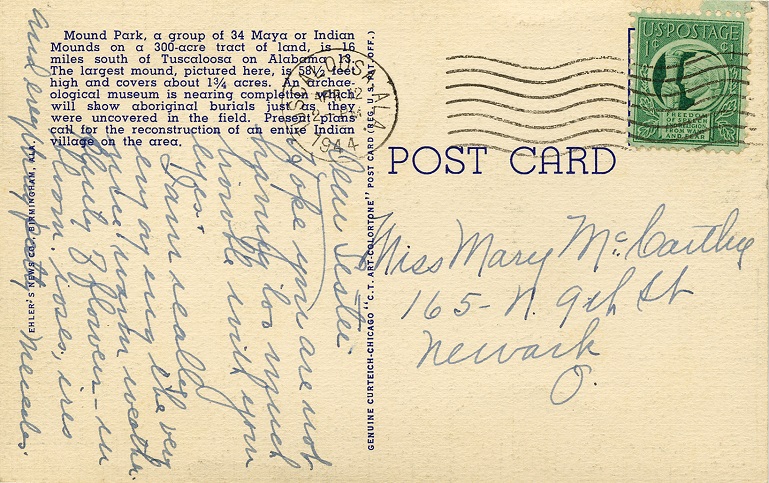 Dear Sister Hope you are not having too much trouble with your eyes. I am really enjoying the very nice warm weather. Plenty of flowers- in bloom roses, iris, and everything pretty. Mecedes Addressed to: Miss Mary McCarthy 165-N 9th St Newark P.

John J. Harper founded Auburn in 1836. According to local lore, the name came from the first line of the Oliver Goldsmith poem The Deserted Village, which reads “Sweet Auburn, the loveliest village of the plain.” In 1851, the Montgomery and West Point Railroad connected the town with Montgomery and Columbus, Georgia. The East Alabama Male College, named Alabama Polytechnic Institute in 1899 and Auburn University in 1960, opened in 1859. In 1872, the Alabama Legislature designated Auburn as the state’s (white) land-grant college under provisions of the Morrill Act. This significantly increased enrollment and revived the local economy. The university remains the strongest economic driver in the city. 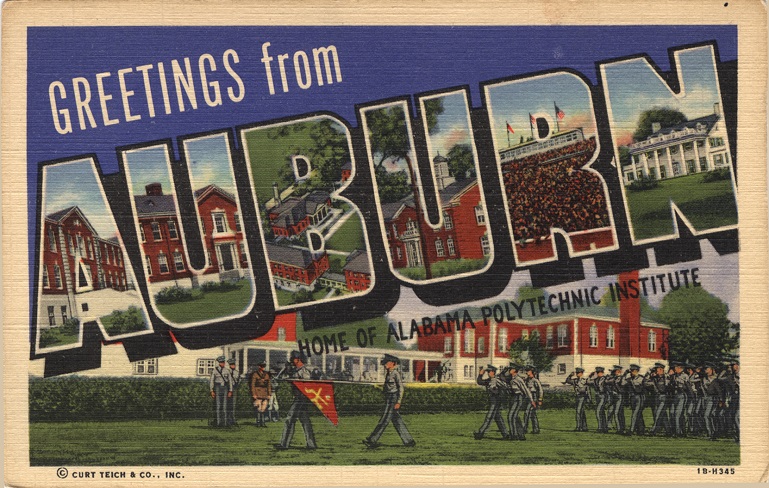 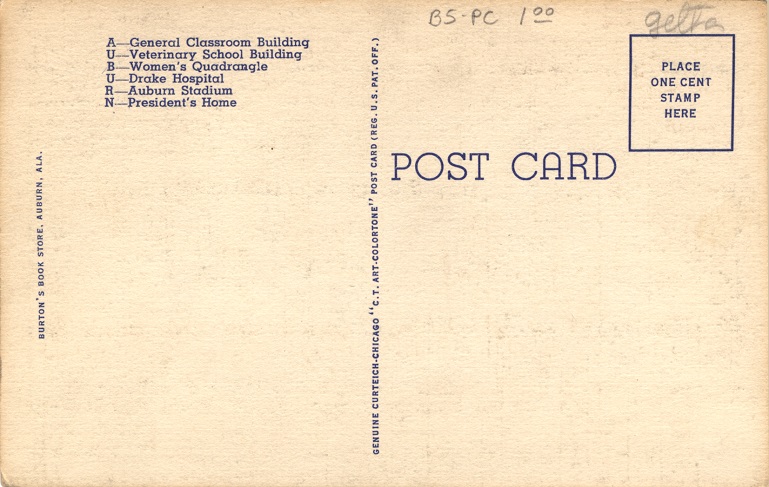 Tuscaloosa was founded in 1816 and named after Tasculuza, the chieftain of Mauvila Town. It incorporated and became the county seat on December 13, 1819, a day before Alabama entered the Union. Tuscaloosa served as the second state capital from 1826 until 1846. The University of Alabama was established there in 1827 and began operations in 1831. The city grew rapidly until the capital was moved to Montgomery, which caused Tuscaloosa to lose over half its population. However, Tuscaloosa’s ability to attract industry and commerce has made it the state's fifth most populous city. 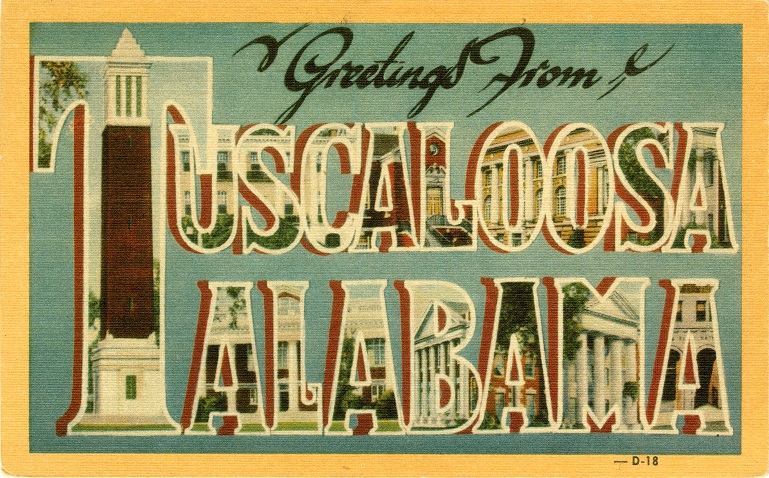 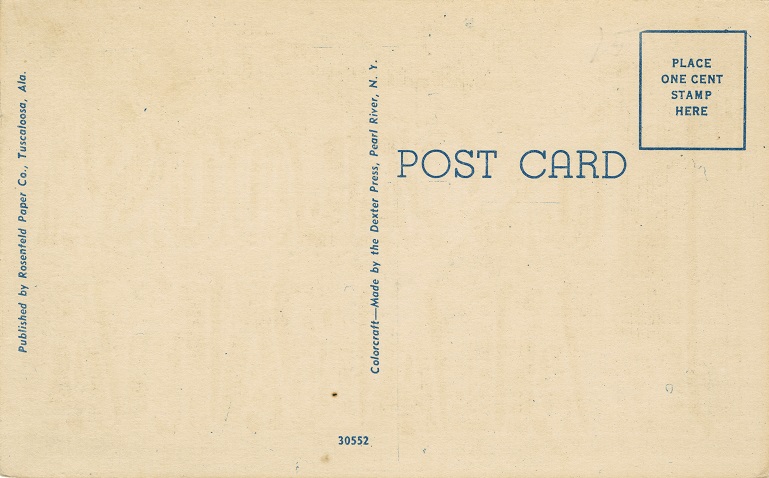