Allen Glover built Bluff Hall, in Demopolis, Marengo County, in 1832 for his daughter Sarah and her husband, Francis Lyon. The home is located on a limestone cliff, known as White Bluff, overlooking the Tombigbee River, near the site where the French expatriate Vine and Olive settlers landed. The original house was built in the Federal style; later renovations added the Greek Revival style. The Marengo County Historical Society purchased Bluff Hall on March 22, 1967, and converted it to a historic house museum with 1850s furnishings, textile collections dating back to the early 1800s, and beautiful antique portraits and landscapes. 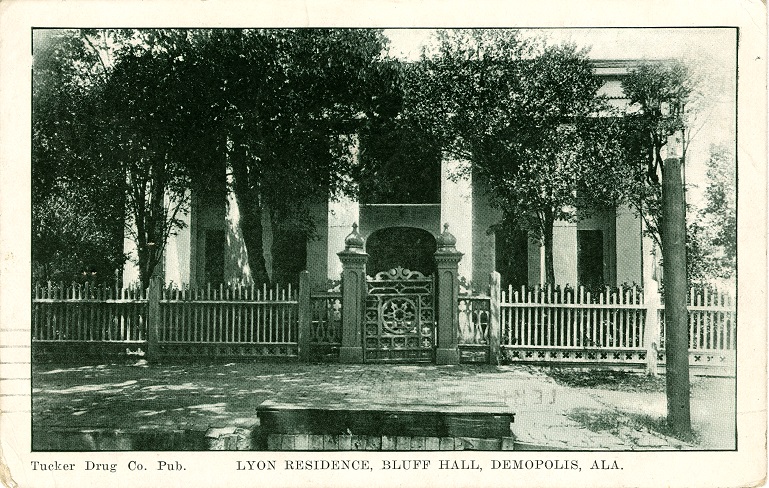 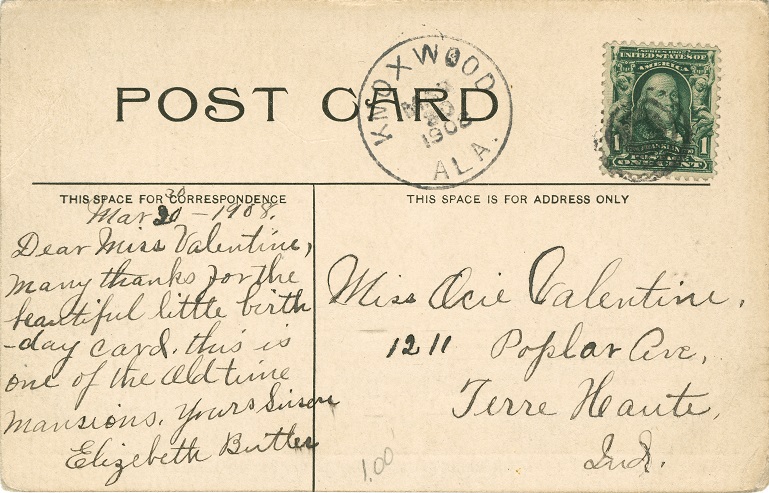 Mar 30 - 1908. Dear Miss Valentine, Many thanks for the beautiful little birth-day card. this is one of the old time mansions. Yours Sinsere Elizebeth Butler Addressed to: Miss Ocie Valentine, 1211 Poplar Ave, Terre Haute, Ind.

The Shorter Mansion, located in Eufaula, Barbour County, began as a humble home built in 1884, by Eli Sims Shorter II and his wife, Marietta Fannin. An extensive renovation between 1901 and 1906 transformed the home into the Greek Revival Mansion pictured. The Eufaula Heritage Association bought the house at auction in 1965. With the help of a state grant, they purchased antique furnishings and made it a house museum open to the public. The annual Eufaula Pilgrimage tour of historic homes is the association’s way of offsetting the cost of maintaining the Mansion and collecting the necessary resources to pursue their preservation efforts. The first Pilgrimage was held April 11-17, 1966. It is now the state’s oldest and largest tour of homes. 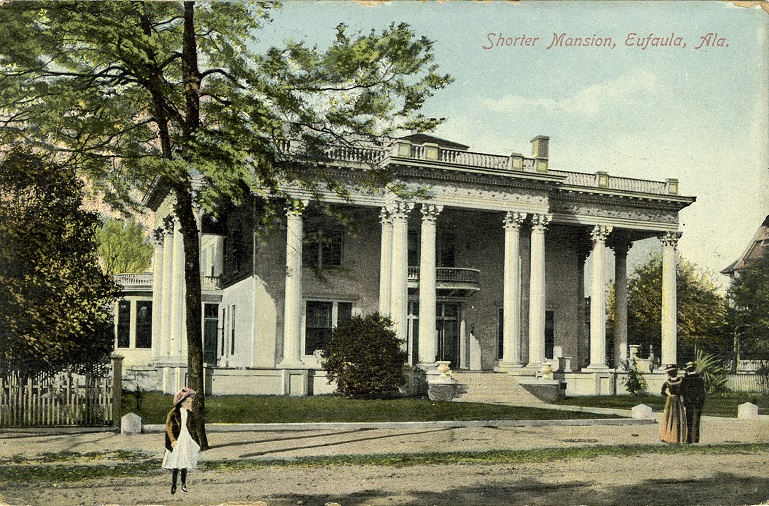 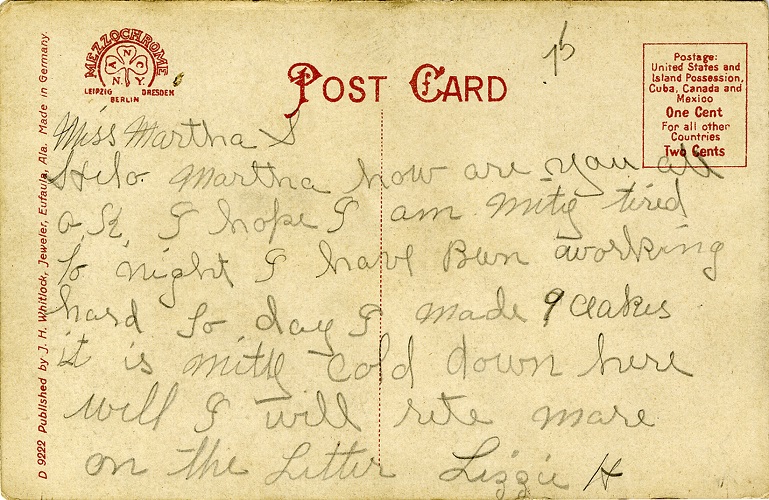 Miss Martha S Helo Martha how are you all o.k. I hope I am mity tired to night I have Been working hard to day I made 9 cakes it is mity cold down here well I will rite more on the Letter Lizzie H

Florence, in Lauderdale County, is home to the W. C. Handy birthplace and museum. It was opened to the public on June 7, 1970. Musician and composer, William Handy, the “Father of the Blues,” was born in this log cabin in 1873. The museum next to the cabin tells Handy's story and displays letters, pictures, musical compositions, personal mementos and artifacts, such as, his brass trumpet and the upright piano on which he composed the “St. Louis Blues.” The Handy Museum is a part of the Muscle Shoals National Heritage Area. Florence has hosted a W. C. Handy Music Festival the last week of July since 1982. 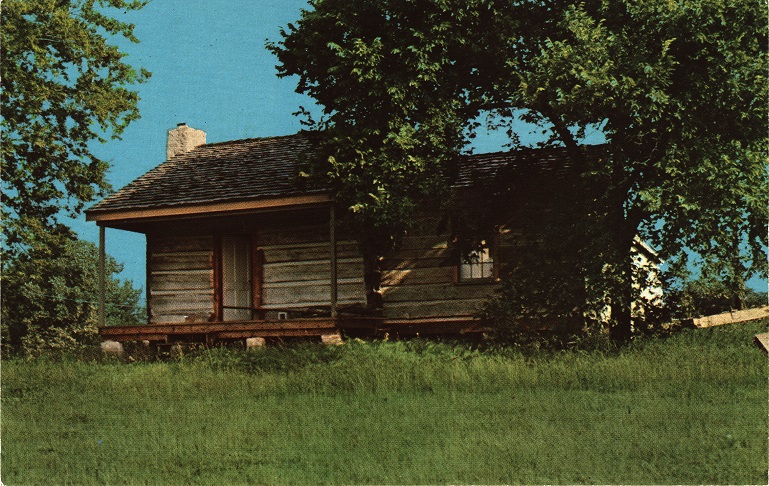 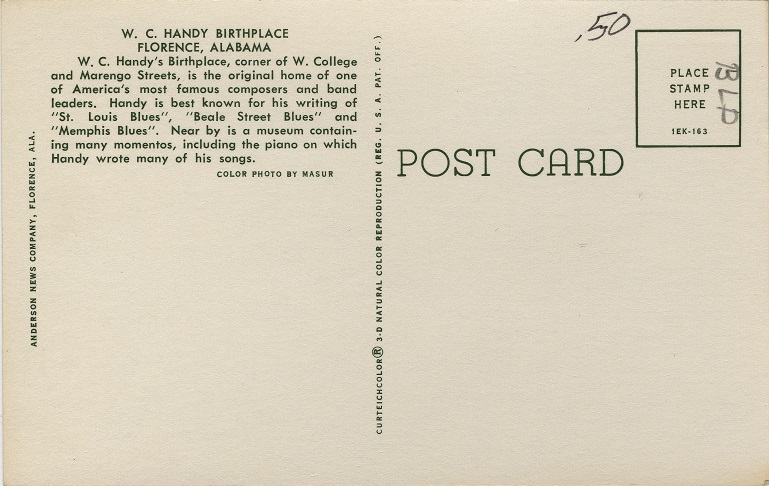 Colonel Isaac Croom and his wife built Magnolia Grove, located in Greensboro, Hale County, around 1840. It is a pedimented temple form of Greek Revival architecture. In 1879, a niece, Sallie Pearson Hobson and her husband James purchased the house. Their son, Richmond Pearson Hobson, was a Congressional Medal of Honor recipient and a U.S. Congressman. The Hobson family deeded Magnolia Grove to Alabama as a memorial to Richmond. The house museum, owned by the Alabama Historical Commission, consists of furnishings belonging to the Croom and Hobson families, as well as Rear Admiral Hobson's artifacts relating to his naval and congressional careers. 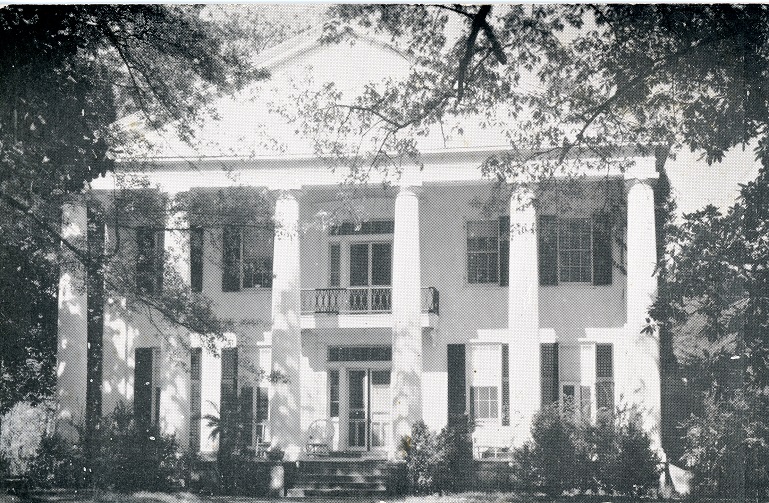 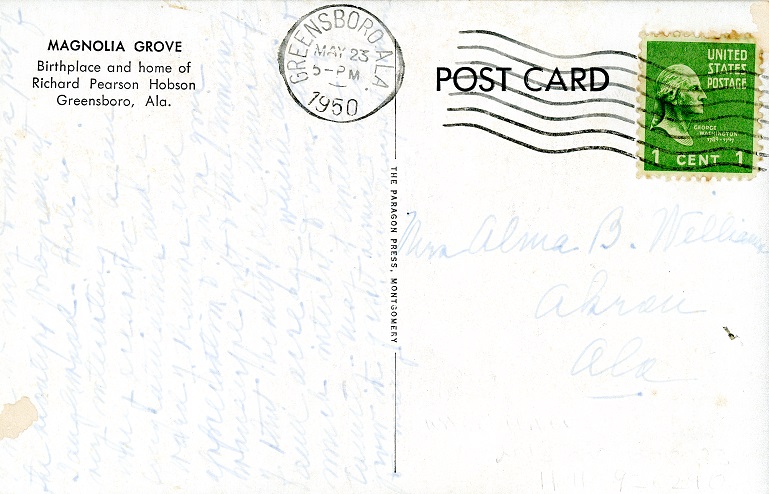 Writing is illegible. Addressed to : Mrs. Alma B. Williams Akron, Ala

The Weeden House, in the Twickenham Historic District of Huntsville, is a Federal style house built in 1819. It has been home to several distinguished Huntsvillians, but artist and poet, Maria Howard Weeden was the most famous occupant. Her father, William Weeden, Sr., purchased the property in 1832, and it remained in the family until 1956. In 1973, the Twickenham Historic Preservation District Association purchased the house and opened it to the public in 1981. Weeden's portraits of former slaves and works of other artists such as William Frye and John Grimes are on display year round. 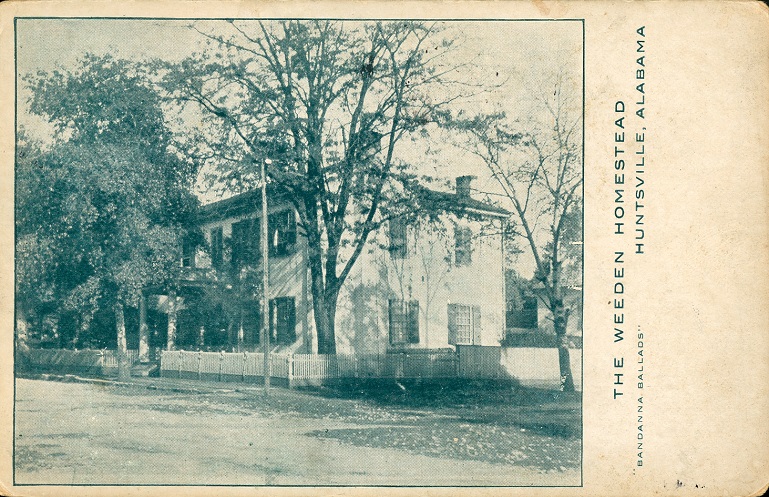 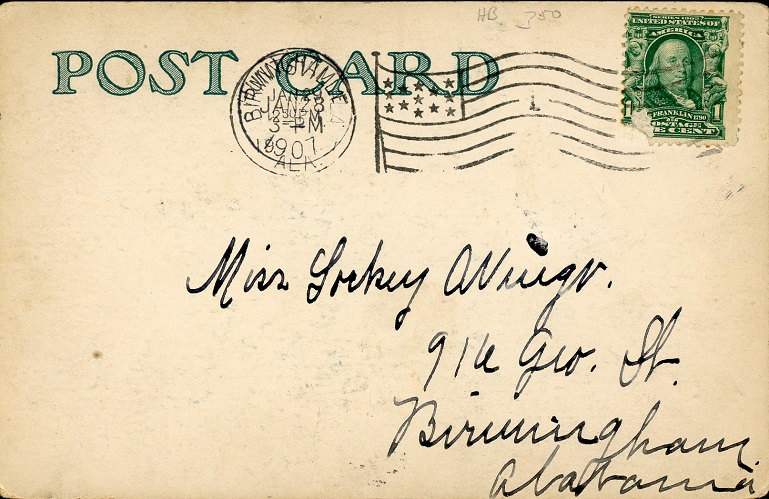 This brick Colonial Revival home was constructed in 1925 by Congressman William Brockman Bankhead in Jasper, Walker County. The home was featured in the December 28, 1936, issue of Life and his daughter, Tallulah Bankhead, was married here on August 31, 1937. The Bankhead House and Heritage Center was founded by John T. Oliver Jr. to create a place to display and celebrate the past and present cultural history of Walker County and the area. The restored home was opened to the public in 2010. Several rooms are fixed galleries, such as the Congressional Library and the Tallulah Bankhead Room, while others host temporary exhibits of local interest. 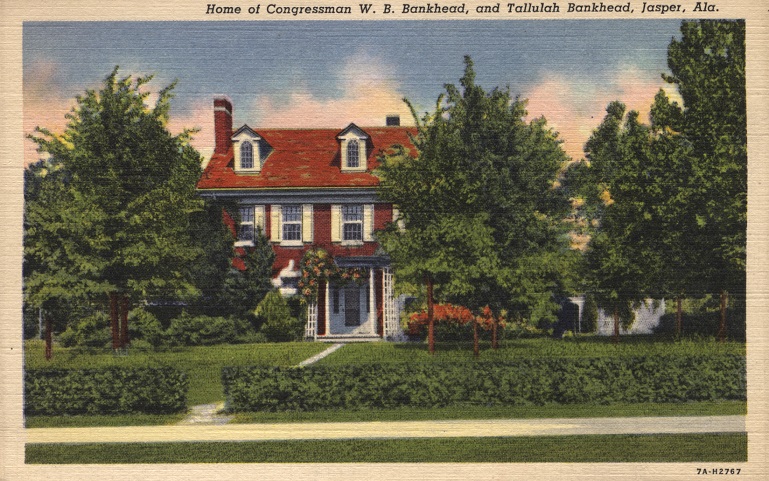 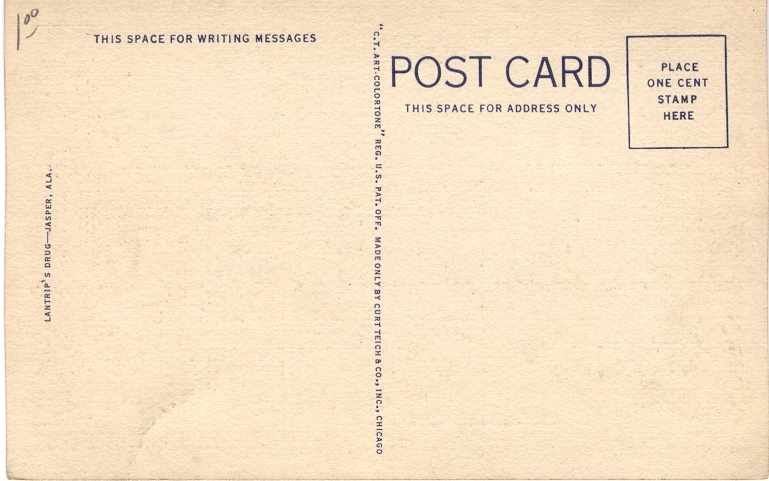 Deconstruction, the process of keeping building materials intact during demolition, was a practice architect George B. Rogers used when building Walter and Bessie Bellingrath’s English Renaissance home in Theodore, Mobile County. He salvaged handmade bricks from an 1852 Mobile mansion, iron lace from the razed Southern Hotel, and flagstones from the corner of Mobile’s Government and Claiborne streets so the home would reflect the architectural heritage of the region. The Bellingrath home was completed in 1936 and opened to the public in 1956 under the care of foundation trustees. 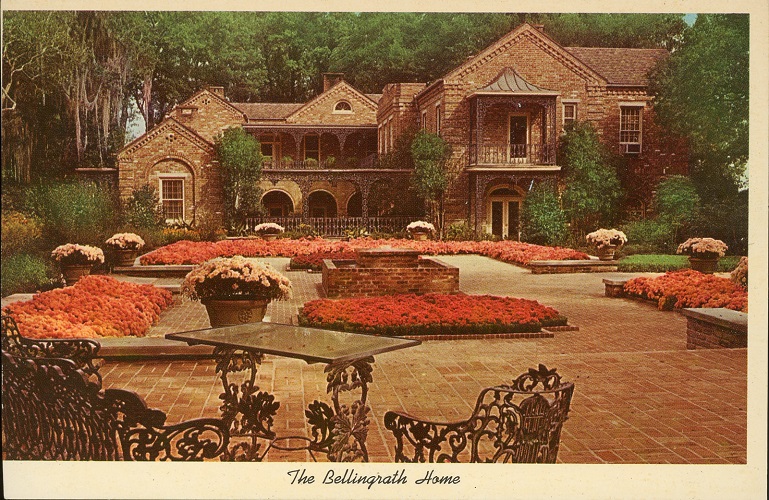 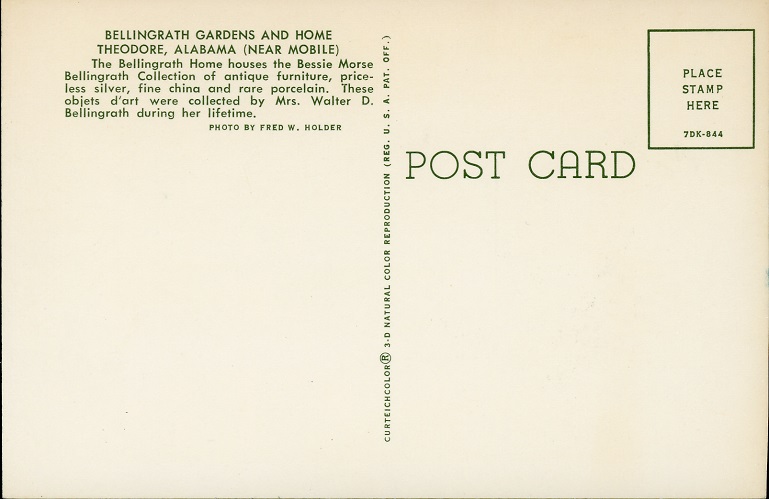 Constructed in the 1830s by physician John R. Drish, the Drish House in Tuscaloosa, is considered a distinctive example of Greek Revival and Italianate architecture. The house has been a home, a church, a school and even an auto parts garage as evidenced by Walker Evans’ 1936 photograph located in New York’s Metropolitan Museum of Art. The Tuscaloosa County Preservation Society rescued the house from the Alabama Historical Commission’s “Places in Peril” list, and a private interest purchased the property and renovated it to use as an events venue. 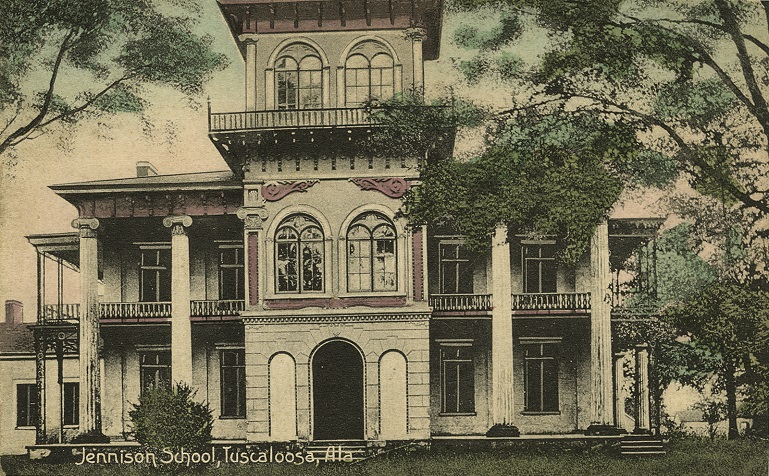 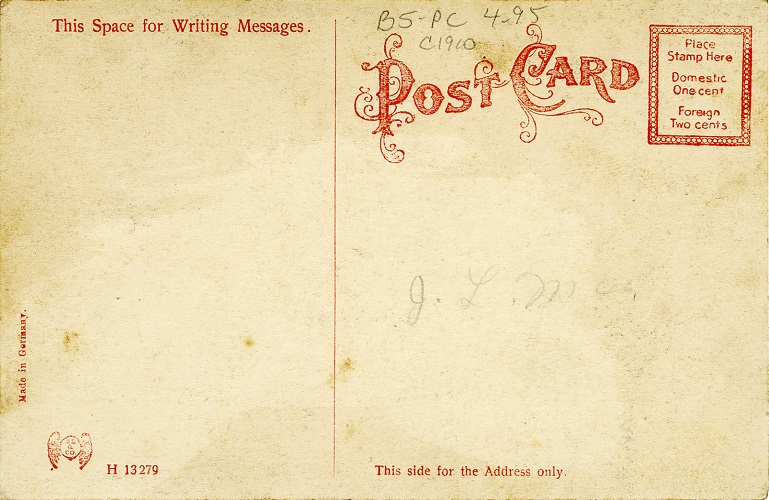