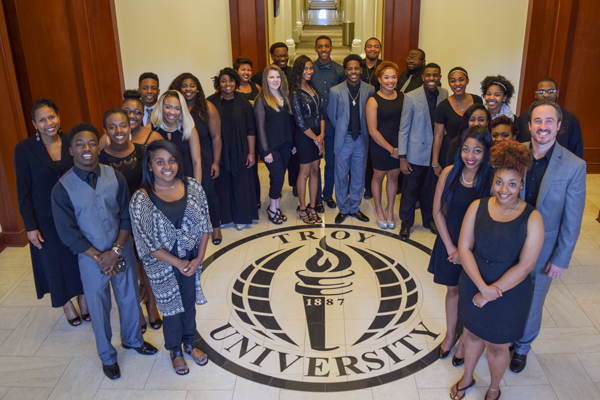 The Troy University Gospel Choir was founded October 1, 1980, and was directed by a student choir member. The over forty-voice choir participated in the Annual Tribute to the late Dr. Martin Luther King, in addition to touring through Alabama, Georgia, and Florida. Since its inception, over 35 years ago, TUGS (Troy University Gospel Singers) has continued to carry on traditions of performing within the community, as well as the tri-state region. Under the direction of Dr. James Brown, TUGS is recognized as a premiere-performing group in Troy University’s John M. Long School of Music. The Gospel Singers specialize in the study and performance of sacred music, hymns, spirituals, and traditional and contemporary gospel music from the African-American tradition. This distinguished group of forty students has performed in churches and schools locally, as well as throughout Alabama, and the tri-state region. TUGS, formerly known as the Troy State University Gospel Choir, has participated in many concerts and prestigious festivals, such as the Moses Hogan Memorial, William Dawson and Afro-American Composers’ Festivals, and has made numerous television appearances including “Good Day Alabama.” The choir had the esteemed honor of performing for Rosa Parks’ funeral, in addition to opening the Children’s Wing of the Rosa Parks’ Museum. Recently, TUGS opened for Vickie Winans in Concert and collaborated with the Boys and Girls Club of Troy and Nairobi Chamber Chorus. In addition to their musical endeavors, TUGS participates in the local Boys and Girls Club after school program, working with children on homework, mentoring, and creating opportunities to express themselves through miming, liturgical dance, and singing.